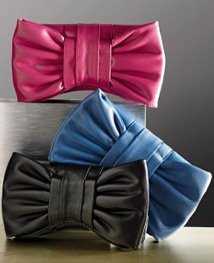 Before we go any further, let us note that we do not endorse copyright infringement. It’s illegal and it seriously hurts up-and-coming designers. On the other hand, if a designer who charges significantly less happens to be following the same trends as a line like say, Valentino, well, we’re more than happy to check out the alternative.

Which is why when we saw these adorable bow-tie clutches on spiegel.com, we thought to ourselves that we had seen that look before—only in a much more expensive version—but in a version dissimilar enough that we think we’ll sleep just fine at night having that cute pink one in our closet. Sure, it’s not Valentino, but it’s also a little more than a grand cheaper. So, we’ll settle.

Categories: Saving with Style
Contest of the Month