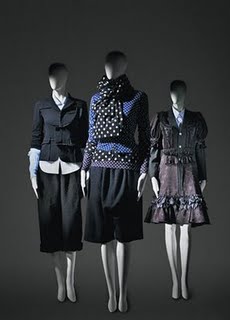 A few years ago on a trip together to London, Jenn had opted to scope out the shopping selection at Jigsaw, while I popped into H&M. What I didn’t know before I walked in was that on this particular day H&M had introduced its designer collection from Viktor & Rolf. I discovered this fact fairly quickly when a crazed British woman nearly knocked me over as she scooped up no less than fifteen shirts from the designers shouting something about all of money she was going to make on ebay with these.

Obviously, I purchased a few items—mostly because I just got caught up in the frenzy. It was my introduction to H&M’s limited designer collections and while it was no 5th-Avenue-rush-from-Jersey-insanity, the sheer number of compliments on my Viktor & Rolf items has prompted me to keep an eye on their other designer collections.

It would be almost impossible to ignore their latest match with Paris-based line Comme des Garcons though. After being featured in the September issue of W magazine the collection (pictured above) had our attention. But now that their new ads for the collection featuring much more expensive than usual prices such as $349 for a dress, it seems everyone has something to say about it.

While purchasing any of these items ourselves would take a trip (Atlanta is the current closest H&M. sigh.), we’re not sure we’d pay these kinds of prices at the discount store’s register anyway.

So what do you think? Is H&M overpricing for its customers?

Categories: Saving with Style
Contest of the Month