Surviving the plane landing on the Hudson is Maryann Bruce's latest brush with calamity. You could say she leads a charmed life -- or not 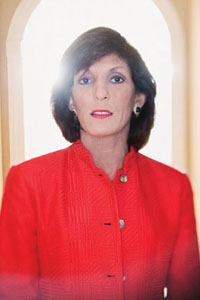 When people first hear the story of Maryann Bruce's wild ride through life, the reactions tend to fall into one of two camps.

There's Manny's side. He was the police officer assigned to Bruce after she survived the crash of US Airways Flight 1549 with only a gash over her eye from hitting the meal tray in front of her. At her side in a New Jersey hospital room, Manny listened to a story startling enough to wow even a big-city cop. Then he asked her if she'd accompany him to Vegas.

Then there's the school of thought expressed by an unknown blogger, who posted this not-so-warm-and-fuzzy reflection after reading her account in the papers: "From here on, Ms. Bruce, could you please make your itinerary public well in advance, so we could all stay as far away as possible from your planned vacations in Honolulu or hotels in Denver or whatever." ("What are these bloggers' IQs?" Bruce asks in her best Noo Yawk fuhgedaboutit accent.)

But maybe there's another way to look at this. Maybe, after digesting Bruce's improbable story, we should embrace the spirit of this investment management exec living in Cornelius who never tires of talking about how she survived or sidestepped four natural disasters, two terrorist attacks, and the Miracle on the Hudson. Her trials — modern man's version of biblical plagues — have been enough to move Bruce to dig deep for an answer to the question that sticks like thorns to an otherwise rosy life:

Why have I made it home all these times?

Luck is surely involved, Bruce admits, like the morning they skied that slope in Colorado before the avalanche. God's hand is also in there somewhere, believes Bruce, a Roman Catholic raised in Jericho on Long Island, New York. But even though the perfect explanation, if there is one, may forever escape her, Bruce still knows this at the end of another eventful day: somehow, some way, for no understandable reason, she has been able to see tomorrow. Over and over and over.

"In my heart of hearts," Bruce says, "I feel like I must have more to accomplish on this planet. I just look at it that it wasn't my time."

Bruce, who turns forty-nine on — we are not making this up — April Fool's Day, welcomes a visitor to her family's home on Lake Norman to talk about tsunamis, terrorist attacks, and such. She and her husband, Ron, have two children: Alex, seventeen, and Vicky, fourteen, both of whom attend Cannon School. The kids have apparently heard this so many times that they walk past the interview without so much as batting an eye. Yes, confirms Vicky on her march through the living room as the earthquake comes up for discussion, her mom is cool as a cucumber. Bruce was so cool, in fact, that when the plane was headed for the Hudson, she was certain she'd survive what she now refers to as "the bird thing." You want cool? She thought they were headed back to LaGuardia for a routine emergency landing until she saw water.

There have been so many reporters peppering Bruce about her brushes with death that she had to prepare a list of the near misses so as not to leave one out. The New York Times, The New York Daily News, CBS, PBS, Ellen DeGeneres's talk show — they've all sought her out. She flew to L.A. for The Ellen Show and returned on the red-eye with free luggage, passes for a Caribbean cruise, and a T-shirt declaring "Laugh Dance Float." Her parents, retired in West Palm Beach, Florida, watched it with their bridge club on a wide-screen TV. A PR guy in New York called wanting to help her write a book. He told her this story has legs. No ham but not shy either, she is comfortable recounting her life's adventures, even to the New York tabloid that opted for the nine-lives-of-a-cat lead straight out of Cliché City.

The Miracle on the Hudson, in which Capt. Chesley B. "Sully" Sullenberger III landed a US Airways Airbus A320 on the Hudson River on January 15 and no one died or was seriously injured, is already a part of Air Travel Lore, so we'll save that Maryann Bruce Disaster Vignette for last.

It's 1984 or 1985. She and her husband are enjoying their first vacation as a married couple poolside at the Turtle Bay Hilton in Oahu, Hawaii. A siren goes off. They don't know from sirens, so they keep sunning — until someone tells them they have to flee to higher ground, a tsunami's coming. They wind up spending a day with fellow evacuees at what she thinks was a Mormon church on higher ground. The tsunami doesn't pan out. Mostly what she remembers is losing a day in the sun.

Her plane flies through Hurricane Gloria in September 1985 as she's rushing from Nashville to New York to be with her sick dad. Her memories of the flight? "It was bumpy."

The Bruces finish a gorgeous day skiing in Breckenridge, Colorado, one afternoon in the late 1980s, return to their condo, and click on the TV. The news is showing footage from an avalanche that struck that afternoon. She turns to Ron and says, "Hey, that was the slope we skied on this morning." She remembers thinking, "Oh my God."

Bruce is in her office on the thirty-fourth floor of the World Trade Center on February 26, 1993, when she hears a BOOM. At first, she and her officemates think it's a small plane that accidentally crashed into one of the towers. Then they figure it must be a blown transformer. By the time she rushes down thirty-four flights of stairs, wipes away the soot, and makes it home by train to Long Island, Bruce knows the truth — a car bomb set off in the garage by terrorists kills six and injures 1,000. Bruce is on a plane to Boston when she flies over the second attack on the World Trade Center. She says she knew in an instant what caused the calamity.

On a business trip to Los Angeles, Bruce is in a cab when an earthquake strikes the neighborhood of Northridge early on the morning of January 17, 1994. The quake kills fifty-seven and injures thousands. Bruce escapes harm. As the ground is shaking, she remembers asking the cabbie, "What the hell was that?"

"I had a long spread there," Bruce says.

Then she decides to come out of retirement. Two weeks — two weeks! — after getting back into investment management, she's flying home from her first trip to the home office when Flight 1549 and the birds collide, the engines blow, and Sully has to land the thing on the Hudson.

Then the optimism that springs from experience kicks in.

Rather than praying or crying, she remembers wondering to herself, "When am I going to be able to get home?" As she's rushing off the plane and into a lifeboat, she grabs her purse that holds her cell phone, because she knows from experience that she'll need to call her family to tell them she's OK.

Except for a few more reporters and TV types hovering about, the Miracle on the Hudson hasn't changed the story of Bruce's life. Maybe, as she has come to believe, it just wasn't her time. But Bruce isn't going to spend much time looking back. Who has time for angst over the past when there are planes to catch and people to see?

As she's said since this ride began, "During a crisis, I'm pretty cool."

Ken Garfield is director of communications at Myers Park United Methodist Church in Charlotte. His past articles for the magazine include a look at the Billy Graham Library, a portrait of little person Logan Duvick, and a profile of banker turned preacher John Cleghorn.

This article appears in the March 2009 issue of Charlotte magazine.
Categories: People