Brooks’ Sandwich House, a modest red hut on North Brevard Street, has been a fixture in North Charlotte since 1973, long before the neighborhood came to be known as NoDa. The brothers who owned and operated it, David and Scott Brooks, took it over from their father, C.T. Brooks, in 1991. Even as NoDa exploded with townhome complexes, hipster bars and restaurants, and visitors drawn by light rail and rideshare to Charlotte’s main arts and entertainment district, Brooks’ remained unchanged—cash only, burgers, fries, and chili prepared by the brothers and their team behind the counter, construction workers filing from the squat eatery into the gravel-and-dirt parking lot with white paper bags in hand.

At about 5 a.m. Monday morning, Charlotte-Mecklenburg Police say, someone shot and killed Scott Brooks, 61, as he prepared to open his business for the day. Expressions of sorrow and shock flooded social media. “It’s a very sad day in the NoDa community, our hearts are with our neighbors and friends at Brooks’ Sandwich House,” the owners of NoDa Company Store posted to Facebook, adding three heart emojis. “We are here for you.”

It was the city’s 103rd homicide of the year, another marker in what’s been an agonizing 2019. The city’s homicide total hadn’t surpassed 100 since 1993, when Charlotte recorded 129 murders. The early-’90s crack cocaine wave drove homicide numbers then.

But the recent spike in homicides has largely confounded police and law enforcement experts, who cite a crest in the tendency of young people to resolve differences with easily available guns; Police Chief Kerr Putney has also criticized judges and magistrates for an overuse of electronic monitoring devices in lieu of pre-trial detention. This year, CMPD has monitored more than 1,900 people ordered to wear the devices, 65 percent of them charged with violent or firearms offenses, the department says. CMPD announced last week that it would no longer allow murder suspects to wear them. Still, police struggle to fully explain the roller-coaster homicide totals of the last few years, from 87 in 2017 to 57 in 2018 to this year’s total.

As hackneyed as it is to refer to a homicide “hitting close to home,” the expression applies literally to me. Since 2007, I’ve owned a house about 200 yards up the street from Brooks’, and lived there for almost all of that time. They’re my favorite burgers in Charlotte, as they are for many, and what I enjoyed at least as much as the food was the Brooks brothers’ stubborn lack of pretense, even as it grew obvious that they sat on prime real estate but stayed where they were, slinging burgers for the lunchtime crowd. They care about the city and people who live here beyond the bounds of NoDa, too. In June, they donated 2.1 acres off W.T. Harris Boulevard, land their father had bought in the 1950s, to Habitat for Humanity, which plans to build as many as 24 townhome units in a city starving for affordable homes.

This morning, one of the investigating officers knocked on my door and asked if I’d heard or seen anything. I’d heard something—an indistinct noise that woke me up but which I didn’t register as gunfire. A few minutes later, I saw the flashing blue lights through the windows, but even that didn’t alarm me much. They’re not that unusual on this block of North Brevard. Just a couple of months ago, a car crashed into the house at the corner of North Davidson. Maybe it was something like that again, I thought, and went back to sleep.

I woke up a couple of hours later to a text from a friend: “I heard what happened, hope y’all are safe,” it said. We were, although in Charlotte, in 2019, you can be forgiven for wondering how safe any of us can expect to be.

At lunchtime, cars and trucks pulled into the parking lot, their occupants unaware of what had happened. A man in a white pickup circled the lot, noticed the lack of a line, and directed a quizzical gaze at Bennie Letterman, a Brooks’ regular—“since nineteen-hundred-and-eighty-four”—who had temporarily assumed the duty of delivering the bad news to patrons who hadn’t heard. Already, someone had left a bouquet of flowers atop one of the rough wooden tables outside.

Letterman approached the pickup. “What happened?” the man behind the wheel said. “They’re not in business anymore?” Letterman told him about the shooting.

that’s a shame. They were just trying to make a living.” He drove off.

Letterman, who wore the red pullover of Burnside Pest Control, the company he works for, said he gets lunch from Brooks’ once a week. “I just had to come down and look,” he said. “Sometimes you get hungry, and you just want a good hamburger. I’d drive clear across town to eat here. Forget the fast food. You come here. It’s homemade.”

It started to drizzle, and Letterman said he had to go. “I’ll miss him. Anyway …,” he said, and started to say something else but caught himself. “I’ll miss him.” Before he got in his car, though, he turned back around and announced: “I will be back.” 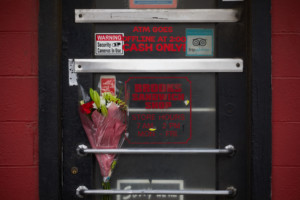 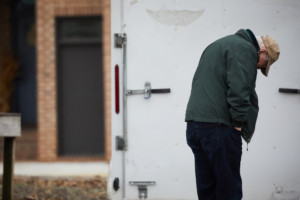 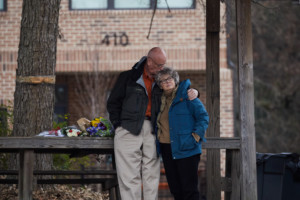 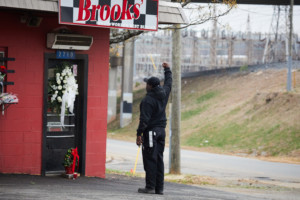 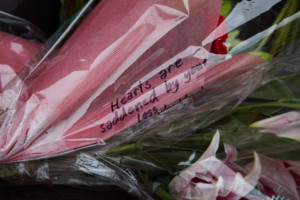 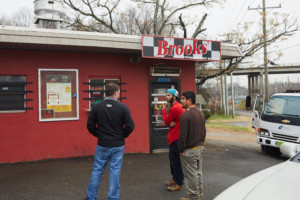 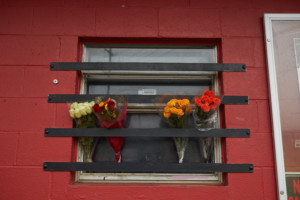 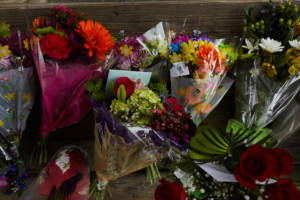 A vigil will be held at Brooks’ Sandwich House at 6 p.m. on Tuesday.