When I finally raised the nerve to delve into my family’s past, I was astounded at what I found—and what new questions I had 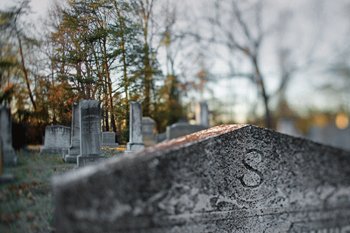 A search for answers about her family’s past led the writer to this Mooresville graveyard.

It started with the love letters, stacks of them from the early years of my parents' marriage. They began with "My Darling" or "My Dearest" and ended with x's and o's down the sides, across the bottom, and under signatures. There were little coded messages and endearing suggestions. Longings, sighs.

I'd had them for years. After my parents died, I ended up with boxes from their attic, boxes that I moved from one house to the next, from one city to another. I rarely looked inside—they were a jumbled mess, and I was overwhelmed by the thought of going through them. So they remained stacked in closets or in attics, mainly ignored.

Now, with our house going on the market and the Realtor advising us to get rid of the clutter, I rented a storage unit—but I was not taking anything over there that I could get rid of. I gathered my nerve and opened the boxes.

The more boxes I opened, the more unnerved I was. Not because I found anything bad, but because I began to realize that I was the only person on Earth who could piece together the fragments of my parents' history. There were photos of people my siblings would not recognize, letters from Hawaii that went with letters from New York, nicknames in one place that went with real names in another. I felt scared. Troubled. Responsible. Overwhelmed. What do you do with the scraps and pieces that remain of a loved one's life? Are these stories meant to be saved? Why did I end up with all of this? Where did all of the stories go that came before theirs?

A few things were well organized. The love letters had fat rubber bands that had gone limp with age, dry and gray like old leather. My father's black-and-white photographs, taken when he was a Marine during World War II, were separated into envelopes, cataloged and carefully labeled: "Pearl Harbor," "Okinawa," "Saipan," "Guadalcanal"—places he never spoke of. I studied photographs of little Japanese boats floating beneath the high rails of his ship and others of a Japanese general signing a treaty. One envelope broke my heart. In neat, penciled letters it was simply labeled "Home."

Why didn't he ever tell us about these pictures? About where he had been, what he had experienced? The envelopes in my lap, I patiently sat through Ken Burns' documentary The War, hoping for clues. In the heartbreaking last episode about the Pacific, for the first time in my life I heard about the Marines' terrible battles and high casualties across the islands. Suddenly there were photos that made sense, like the one of a group of Marines sitting by a dirt road. On the back was written, "Resting before advance into Shuri, Okinawa, Ry. Is." At Shuri Heights, Marines would fall like apples shaken from a tree; the battle for Okinawa was the bloodiest in the Pacific theater.

I found my mother's engraved birth announcement from Argentina; in another box, photographs of the estate her parents lived on while my grandfather, an engineer, worked on South America's first dam. There were vineyards, flower gardens, and men digging a swimming pool. There was my great-grandfather's discharge from World War I, passports from the 1930s, newspaper clippings, receipts, and even a bank letter of foreclosure—my father's family lost their home during the Great Depression.

This must be how people get sucked into genealogical research, I thought. The same way one gets sucked into a novel that you can't put down. You just have to find out what happened.

I bought a light table, spreading out orphaned negatives—I needed prints. I ventured to Camera World, off Pecan Avenue in Plaza Midwood. Big photos came back—I was shocked by their clarity, by the glimpse into a world that belonged to another generation. I started organizing by year, then by family. Pieces—a few—began to fit together. My questions got bigger, older, crazier. When I realized that my father's family had been in the newspaper business in the mid-1800s, I was stunned. There were writers and editors in my family around the time of the Civil War?

I was pulled into a mission that I didn't start, and one I couldn't end. The questions had reached out from the past and bound me to it; I was fixed now, like a belt about a waist.

Among the papers was a hand-drawn map of a graveyard near the Catawba River. Maybe, if I could find it, I could fill in some gaps. I thought I remembered my father taking us there when I was a child; it was somewhere near Sherrill's Ford, where his family had crossed the Catawba in the 1700s. I studied the markings, looking for anything familiar, anything that would jog a memory. Landmarks included "log cabin" and "church" and "sail boats." An arrow pointed to "Moorsville" and another to "Troutman." I was stumped. I decided to drive up there to see what I could find.
On a dry October afternoon, under a shrouded sun that hung in a gray sky like a ghost, I followed Interstate 77 North to Mooresville. Getting off at exit 38, I turned down one road after another, trying every imaginable combination in search of the graveyard. After an hour of looking in back fields behind Wal-Mart and fighting traffic along congested West Plaza Drive, which runs into town, I lost heart. Maybe I was all wrong. Maybe there was no graveyard. Maybe someone had built over it. Could developers do that, I wondered? Was a condo project on my ancestors? I decided to drive into Mooresville to the Town Hall. Maybe it had a record of area graveyards.

To my surprise, it did not. After hanging around in the basement, talking to a woman at the copy machine, I turned to leave. "But wait," she said, "let me ask one of the women who grew up here. Maybe she knows something." I sat down and waited. It was quiet, and the place was deserted.

Eventually she returned with a woman who remembered an old graveyard above Dead Man's Curve—kids went there when she was in high school.

"Drive out Brawley School Road. It was out there," she said.

Walking out the basement door into the hazy midday, I thought about the last time I had been down that road—it had been several years ago when I visited a large, elegant home at The Point for a story in this magazine. The neighborhood, a luxury golf course community on the shores of Lake Norman, was at the end of Brawley School Road. A long country road, there should be plenty of places along the way for old graveyards.
For ten miles I scrutinized every scrawny field and suspicious curve, slowing down, turning around, coming back, continuing on. No graveyard. By the time I got to the roundabout at The Point, I knew it was over. The graveyard was gone, my past was gone. Turning into the roundabout, I circled to head home. But as I got to the road leading out, I thought, as crazy as this seems, I am going to drive this Brawley School Road past the houses, out to the water. I'm not leaving until I get to the end. I circled back through and followed it out the other side.

A half mile down, I nearly had a wreck when I saw, to my right, a small field of stubble coming into view. That can't be what I think it is, I thought, too scared to believe it. I was so stunned that I was almost past the field before I could stop. In a delayed reaction, I hit the brakes and backed up. Right there, right there beside the cart path for the golf course, with big houses all around it and the lake just shouting distance down a hill, right there was an old graveyard.

My heart was pounding as I leaned over the fence to read the names on the tombstones. Then I stopped myself, got back in the car, parked on a side street, and walked up to the gate. Pushing it open, I approached the back row of gravestones and began to make my way across. I would do this methodically, row by row, so that I would not miss anything.

In the third row, a large tombstone sat on a rectangular granite frame, like a train car on a box-shaped rail. The granite served as a frame for five graves; at the foot were stone blocks, each deeply engraved with a name. They were all that was left of someone's passage into another world. As I read the large tombstone, I realized this was the grave of my great-grandfather, born in 1862, and of his wife, and of three of their adult sons.
As I searched other gravestones, I found rows upon rows of people I had never heard about but who bore the family name. I struggled to tie relationships together by reading dates and following links. The graves were like giant pieces of a puzzle scattered about my feet; some fit together, and some did not. I was frustrated; I was exhilarated. I had found some answers, but with them more questions.

Overhead, a strange ring of light surrounded the sun, wide as a rim on a wagon wheel. I could not recall ever seeing anything like it. The ring glowed in a haze that went from horizon to horizon, as though the sky were a gray pool. Like a ball slipping underwater, the sun sent out a ripple as it sank. I squinted as I looked up into this eerie heaven. The world above mirrored my world below: there was light, but it had slipped behind a shroud. My mission was only beginning.

This article appears in the February 2008 issue of Charlotte magazine.
Contest of the Month