Surprisingly, the 'burbs are not a wasteland for singles 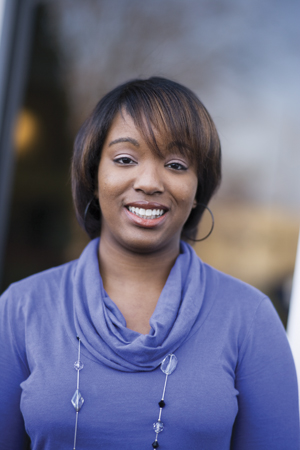 "I love living in Ballantyne — I like the south Charlotte area," says twenty-five-year-old Davida Jackson (pictured). Not a surprising statement, until you learn that Jackson is single. Yet she doesn't mind living in the land of minivans. The Indianapolis native moved to Charlotte in October 2008 from Iowa, where she worked as a news producer. She said the Queen City popped onto her radar because she heard it was a good place for single black women, particularly to meet eligible black men.

She picked Ballantyne because she thought it would be safe. But it came with a cost — distance from those eligible bachelors. "There seems to be a lot of single guys in Charlotte, just not on my side of town," says Jackson, whose roommate is a single woman as well. "I mostly meet singles in uptown or South End."

But Jackson still finds things to do. She's gone to Salsa Night on Tuesdays at Cosmos Café, which opened a Ballantyne location in May. And she says she's been hearing good things about the popular Mix at Six at Ballantyne Village as well as the Friday-night event that Digital Divas hosts at On the Roxx.

Held each Wednesday from 5 to 9:30 p.m. during the spring and fall, Mix at Six is Ballantyne's version of uptown's Alive after Five. "Probably 75 to 80 percent [of the people who attend] are from the south Charlotte area," says Renee Trudeau, director of marketing and promotions for Ballantyne Village Management. While Mix at Six draws a good crowd, it's not as large as uptown's after-work social. But that's part of its appeal to some. The age tends to be older as well, about thirty-five to fifty-five, Trudeau says.

On the north side you'll find singles balancing life in the 'burbs with their desires to mingle as well. Carl Foulks is a thirty-eight-year-old gastroenterologist who enjoys life on Lake Norman. He bought a house there in 2006. As a bachelor with a doctor's salary, he could have chosen to live anywhere in the Charlotte area, but he decided on a spot that was conducive to his lifestyle — and his regimen as a triathlete.

"I can swim behind my house, I can ride my bike right outside my front door, I can go for a run, or I can take my boat out," Foulks says. "I've always loved the water."

Foulks doesn't go out much near his house, but he says he doesn't feel like he's missing anything by living in an area where most people are older than he is and many are married. "If I'm not on call during the weekend then I'll entertain at my house," says Foulks, who has plenty of space at his 7,000-square-foot home. "You have an opportunity to meet people that way because someone always brings a friend. I don't have to go into the city every weekend to enjoy myself."

Some suburbanites do want to experience the city, and many of them will call Coretta Livingston, a party and event planner. She coordinates several events each month, including events specifically for singles. "I try to cater my events for people who are looking for something to do, but don't want to be in that typical club environment," Livingston says.

Her lock-and-key parties, which she holds at bars and lounges such as Apostrophe and Allure, draw single men and women who are looking to meet. Each woman is given a padlock and each man is given a key; then the participants are set loose to find their match. Livingston also started a weekly party bus tour that departs from Therapy in uptown on Friday nights. Partiers pay $25 and hit four bars and nightclubs throughout the night while partying in transit.

"I get people from all around Charlotte," she says. "And a lot of the places we go, some of them have never been to or have never even heard of."