For two years potential homebuyers passed on the dated Frank Lloyd Wright-esque home. But it took just one to have a vision.

In the golden age of American aviation, the sleek curves of airplanes inspired the popular space-age-style furniture that was showing up in living rooms across the country. James Nisbet and his wife, Kay, were just one of many who had caught flight fever, and they indulged their passion by purchasing a 100-acre stretch of land in what is now Weddington. In 1963 they built their own private airstrip and a spacious estate with sweeping views of the sky and a quirky design inspired by Frank Lloyd Wright. Their house would later become the centerpiece for Aero Plantation, a secluded, densely wooded community that shrouds its inhabitants in nature. 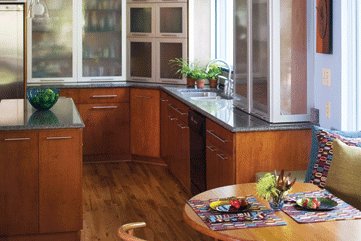 The Nisbets’ 10,000-square-foot home went on the market in 2004, shortly after James passed away. The home included a nine-hole golf course, home theater, spa, private pool, imported palm trees, and a small airplane hangar. Despite these amenities, the home didn’t hold much appeal in the modern real estate market. It was aesthetically and structurally dated.

For two years potential buyers came and went, attracted to the estate’s spacious land and breathtaking views but turned off by the dizzying array of floral-print and mirror-covered walls and psychedelic spangles that lurked in every room.

Fresh off the sale of her personal business, Carole was thirsty for a new challenge, and the renovation of the Nesbit estate seemed like a worthy adversary. “I wasn’t really looking to move,” says Carole. “I was just looking for an opportunity to do something new.” Carole and her husband, William, bought the house and moved in with their two teenage children. “It was really a blessing that I was so naive about this kind of renovation,” says Carole of the eight-month remodel. “If I had known what I was getting myself into, that we would be pulling out plumbing and rewiring all the electricity, and repairing water damage and replacing windows, I probably never would have done it.”

Seeking guidance, the homeowners hired ASID designer Teal Michel. “I don’t think I have ever been so overwhelmed by the sheer scope of a project,” says Michel. “It was exciting, but daunting.” From the popcorn-textured ceilings to the pickled pink floors, there were endless tasks to be tackled, but first Michel assessed her client’s desires. “I knew I wanted something that would have a good flow for entertaining,” says Carole, “and I knew I wanted to bring in the colors of the nature outside, the blue lakes and sky and the green trees.” Using those directives as her guide, Michel started with the overhaul of the undersized and outdated kitchen.

The first order of business was to knock down the wall that stood between the large living room and the narrow, cramped galley kitchen. In its place, large, airy archways were erected as was a serving counter with cabinet space. A second wall was removed from the interior of the kitchen, adding eight feet of width that allowed for a counter with room for stools and a separate wet bar.

Though the original center island was left intact, hearty granite was brought in to update the countertops, and Michel designed custom-fit cabinets that stretch from the kitchen counters all the way to the ceiling, adding much-needed storage without sacrificing surface area. The modern cabinet fronts are made from an opaque glass material and accented with industrial-inspired metal pulls. To add some verticality, Michel heightened the original ceilings six inches and added a border of substantial crown molding. Behind those moldings, cove lighting was installed, giving off a gentle glow that is perfect for setting the mood for evening gatherings.

Those same rich wooden floors were the starting point for the renovations of the living room space as well. “It has these beautiful views outside the windows, but it needed warmth inside,” says Carole. That was accomplished by coating the cavernous space in a sunny but subtle shade of green and extending the effect of that cheerful hue to the cathedral-like ceilings. An imposing white stone fireplace dominated the original layout, distracting the eye and breaking up the natural flow of the room. Michel’s design strategy was to deflect attention away from that fireplace and create three separate but harmonious vignettes. The main seating area includes a custom-designed wraparound sofa and two swiveling occasional chairs, all upholstered in bright, contemporary hues of blue and green. Between them sits a glass coffee table with a wooden base. The centerpiece of this relaxing space is the custom-built media-and-book cabinet that hides a flat-screen TV. The unit was specially designed so that it would fit snugly into an oddly sized alcove.

Across the room is where the Nisbets once showcased their grand piano. Now, the space is a favorite gathering spot for Carole and her family. A cozy chaise lounge invites solitary lingering (“It is the perfect spot for a glass of wine after a long day,” says Carole), while the pair of upholstered chairs that flank it suggest an intimate location for conversation among close friends.

The dining area of the large room is set off by a lively animal-print area rug in neutral tones that blends effortlessly with the maple floors. Tucked away here is perhaps the most noteworthy piece of Michel’s entire design vision, though it is easily missed at first glance. One of Carole’s wishes was to have her family heritage honored in the décor scheme. To achieve this, Michel commissioned a glass etching of Carole’s family crest by local artist Whalen Cato Jr. The chiseled piece of glass then became the base for the family’s spacious dining table. “It really is an heirloom piece,” says Michel. Carole agrees: “I already have family members asking me who gets it next.”

The overall effect of the renovated kitchen and living spaces is fluid and organic, drawing inspiration from the world outside without fighting against the industrial qualities and retro sensibilities that are inherent to the structure itself. Carole’s dream of turning this monument to a bygone era into a modern home might have seemed, to some, like a foolish flight of fancy. To Carole, it seemed more like a great adventure, something akin to what James Nisbet might have felt every time he pointed his plane toward the North Carolina sky.

This article appears in the Home & Garden October 2007 issue of Home + Garden.
Categories: Home & GardenFeature, Spaces
Contest of the Month