In spite of its petite size, interior designer Missy Luczak turned a charming Plaza Midwood bungalow into a hidden jewel 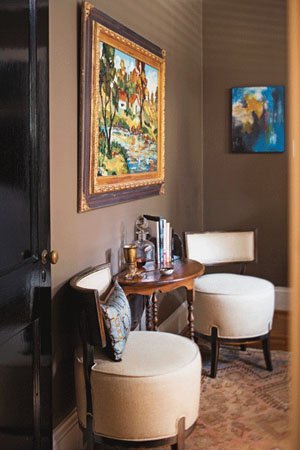 The "little jewelry box" is how one friend refers to interior designer Missy Luczak’s Plaza Midwood bungalow. It’s an analogy that proves perfect, given the mix of glamour, precious family heirlooms, and sheer surprise tucked into a petite 1,400 square feet.

When Luczak, who heads the interior design group at the local architecture firm Meyer, Greeson, Paullin, Benson, first saw the 1940s Plaza Midwood home six years ago, she fell for its charm. "I drove by and loved the front porch and great curb appeal overall," she says. She also admired how the immediate neighborhood had evolved, shedding its unsafe reputation for that of a tight-knit, diverse community within close range to uptown.

Once inside the two-bedroom, one-bath charmer, the space felt pleasingly larger than its stated square footage. There weren’t a lot of hallways, which often eat up small houses, explains Luczak, and the generously sized rooms were directly connected to each other, maximizing the interior’s living areas. Luczak saw potential.

The bungalow had already been updated moderately, but Luczak hired general contractor Ben Collins of the Salins Group to take the renovations a step further. To corral more light and visually swell the space, she widened the narrow archways between the rooms and smoothed over the ceiling in its entirety to erase an unsavory popcorn effect. Recessed lighting was installed in the living room and kitchen, and, for added architectural interest, a heavy dose of crown moldings throughout.

After two months of construction, Luczak was primed to decorate. She gravitated toward an eclectic style, ranging from American antiques to modern artwork. "A lot of clients ask me if they can mix different styles," she says. "For me, every house should tell a story about the person who lives there. Yes, there are rules, but you should always be willing to break the rules if that means your house will be more of a reflection of your personality. That’s what gives an interior space character."

Ever mindful of scale and proportion, she surrounded herself with objects that held significance and ones that she simply loved. Infusing the space with inherited family objects was a must. "These pieces offer so many great memories," she says. Yet, she admits, "I didn’t want to feel like I was walking into my mother’s or grandmother’s house." The answer: leave "the bones" of the furniture intact and focus on freshening up the fabric where appropriate. In the living room are two noteworthy illustrations. The sofa and a chair from Luczak’s childhood home in Roanoke, Virginia, were swathed in sleek, cream-colored leather and finished with nail trim. "The updates still show off the lines and character of the furniture, but it’s more me," she says.

The ultracomfy chaise in the sunroom (where Luczak lives when enjoying downtime at home) was spared a trip to the upholsterer. Designed by a family friend, the funky, vintage motif on the lounge was the main fabric in Luczak’s parents’ bedroom and sitting room. "I pulled it out of storage after twelve years and swore I’d never have it re-covered," she says. "It’s too sentimental."

Her collection of riding ribbons from equestrian shows, displayed in the vestibule between the bedrooms, also holds special meaning. "I’ve been riding since I was eight years old, and it’s a retreat for me," says Luczak, who strategically placed the awards in a more private area of her home, firmly believing "not everyone loves your personal things as much as you do."

Luczak’s decorating sense isn’t limited to her sentimental side. This outgoing style maker likes to have fun and avoids taking life too seriously; the philosophy is echoed in her choice of the unexpected. For example, there’s a zebra-print rug from a trade show in Atlanta and two mirrored dragon sculptures from Luxe Home Couture inhabiting her formal living room.

Reflecting Luczak’s passion for design and travel, stacks of beautiful coffee-table books on the aforementioned subjects sit carefully placed throughout the house; sometimes the towers stand as ornaments on their own and in other instances they serve as pedestals for small curios. But the collection may be outgrowing her home. "The other day I bought a great book on Cuba, a place I’ve always wanted to visit, and thought, ‘Now, where can I possibly balance this book?’ " says Luczak, laughing.

Living in tight quarters, the designer is forced to think twice before making a purchase. "I’m constantly shopping for clients, and it’s hard to say ‘no’ when I find something that’s perfect for my own house," says Luczak, who has devised "systems" to efficiently use every inch of her house. To weave in new furnishings as her tastes evolve or the seasons change, she relies on her attic to act as a revolving door of home furnishings. She’s invested in mini kitchen tools to squeeze what she needs into the one drawer in her kitchen. And she designed the dining room to essentially double as a foyer. An oversize light fixture—a rice-paper globe—hangs above a round, skirted dining table to make the space an immediate focal point upon entering the front door. When she’s not eating at the table, she pulls the chairs against the wall to make the table appear as more of a "welcome center."

While Luczak loves her home and its ease of maintenance, she doesn’t envision herself pulling out serving platters stowed beneath her dining room table forever. The day will come when she’ll build out, build up, or move on. If she makes the latter choice, she already has friends vying for the keys to this jewelry box.

A former editor for Marie Claire, Nancy Rones writes for Redbook, Parents, and Self magazines.