ON A MILD EVENING in January, thick, gray smoke rolls over the top of St. Luke’s Lutheran Church and twists past the line of headlights that point south on Park Road during rush hour. The smell of burning hickory seeps through closed windows. Curious commuters turn into the church parking lot, where nearly two dozen large metal grills are heaped with pork butts. Boys and their parents hustle from one task to another.

This temporary setup, blanketed in smoke and brimming with youthful energy, is among the most popular places to find barbecue in the city—one of many fundraisers run by the city’s Boy Scout troops.

“Charge this man double,” says Gary Swanson, the scoutmaster, as I walk into the gymnasium to buy a few pounds of Lexington-style barbecue. I spent my boyhood in this particular unit, Troop 355, which, like most scouting units, uses this event to raise money for epic adventures. Thanks to barbecue sales, we canoed the Boundary Waters of Minnesota, sailed for 10 days in the Bahamas, and backpacked in New Mexico. My buddies and I would carry wood, pick and pack containers of chopped pork, and get grease stains on our jeans, while our parents stoked the fires and stirred pots of vinegary sauce. Like many troops, 355 sells bulk barbecue by the pound, as well as plates and sandwiches with slaw and baked beans. 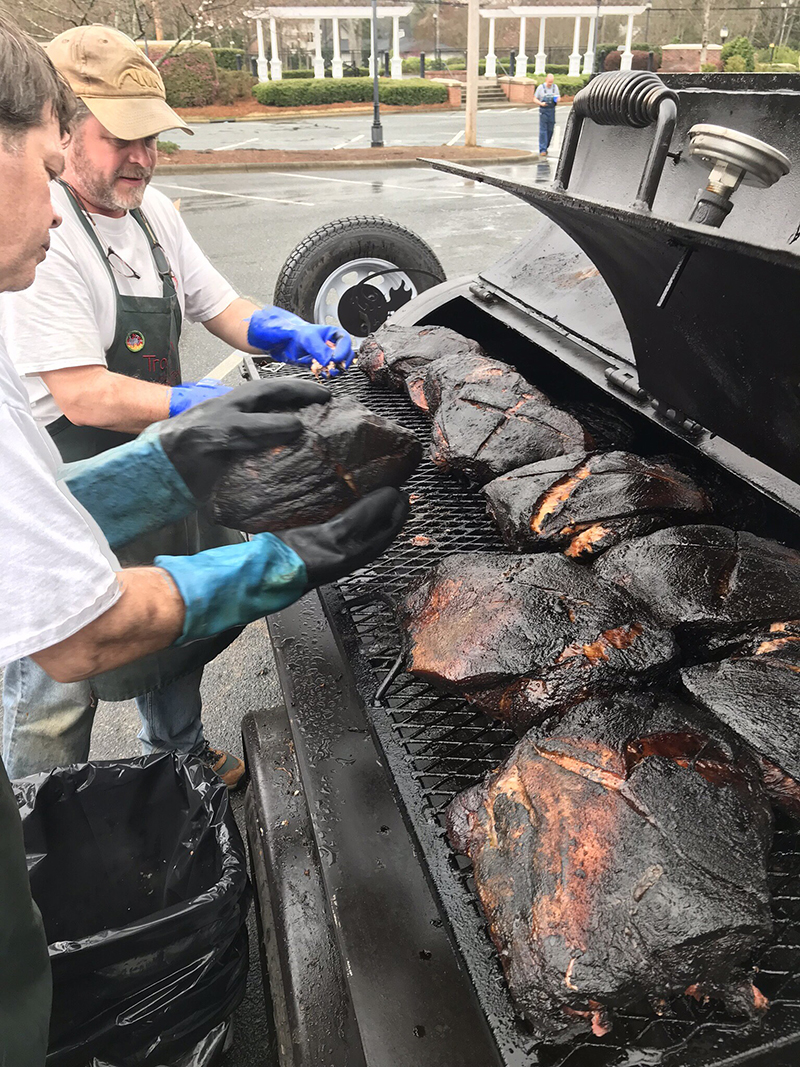 One of the city’s longest-running Scout barbecue events belongs to Troop 33, chartered to Sardis Presbyterian Church in southeast Charlotte. The troop started cooking barbecue for fun in the 1970s and turned it into a fundraiser on Super Bowl weekend in 1994.

“Half the crew has been on the job since the first year,” says Mike Olert, a volunteer whose sons are now grown. At its peak, Troop 33 cooked six tons of meat in 24 hours; this past year, members cooked 7,200 pounds of Lexington-style, cinder block-pit-cooked pork, bottled 175 gallons of sauces, and prepared 920 quarts of Brunswick stew.

Many of these Scout troops have loyal customers—and in some cases, decades-long followings—who mark their calendars and order in advance. Barbecue typically runs either side of $10 a pound, and pints of sauce usually sell for four or five bucks apiece. Yes, the barbecue is good (and, in some cases, better than what you’ll find at Charlotte restaurants), but diners often support the troops because of what their purchase buys for the young Scouts.

“We had auctions, car washes, sold popcorn, and other projects, but none of these collectively really provided enough funds,” says Michael Turner of Troop 19 in Huntersville, which serves its pork eastern-style. “What is more North Carolina than barbecue?”