Singer Nicole Atkins proves music waits for no one 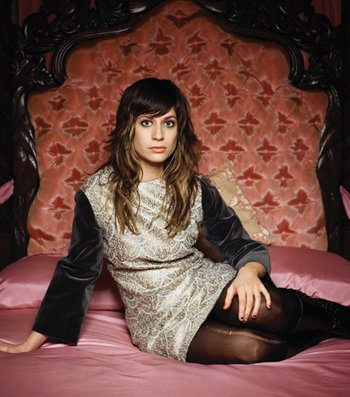 If you received bad service at a bar downtown between 1996 and 2001, your waitress could've been a fledgling folk-pop singer. Nicole Atkins's mind was on songwriting.

The Neptune City, New Jersey native moved to Charlotte in 1996 to attend the University of North Carolina at Charlotte.

She majored in illustration ("I wanted to do comic books"), but music was always her passion. She joined a local band called Los Parasols, and also befriended a group of fellow UNCC students—musicians known as the Avett Brothers.

"At the time, the music scene in Charlotte was bursting," says Atkins, twenty-nine. "It might still be … I know the Avett Brothers are doing really well."

After graduating in 2001, Atkins moved to the Big Apple. But after growing "sick of New York," she returned to Charlotte in 2004. Her friends told her about a recording studio that was being built, and she arranged to paint the studio in exchange for recording time. Many of those songs helped Atkins land her deal with Columbia Records in January 2006.

"They say it takes your whole life to write your first record … and I think that's pretty accurate," she says.

Atkins, whose band is known as Nicole Atkins & the Sea, is currently touring and hopes to bring her act to Charlotte within the next couple of months.

"One of the things I miss most about Charlotte is eating at The Penguin," she says.

They must not have let her work there.

Web Extra: Q&A With Nicole Atkins
She talks about the process recording her album, her thoughts on the music industry, and her first big national TV appearance.

This article appears in the February 2008 issue of Charlotte magazine.
Categories: Buzz > Spotlight
Contest of the Month