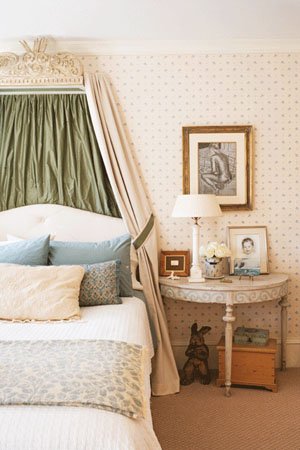 The first time Emily Bourgeois stepped inside her Georgian Regency townhouse, she felt transported to an urban home in London—a city the former South Carolina native grew fond of after studying architecture there.

Tucked away on a tree-lined street in Eastover, the brick townhome’s curved front and subtle circular turret in the rear—a graceful way to connect the angular rooms—is very British, says Bourgeois, owner of Bourgeoisie Inc., a small Charlotte firm that designs residential millwork. She reflects, "It reminded me of the Pelham Hotel, a small London inn that occupies a townhome—and one of my favorite spots in the world. The property was like none other I’d seen in Charlotte; I’d found a little respite."

Built in 1924, when nearby Providence Road was only two lanes wide, the prewar status of this 2,600-square-foot English charmer was another feature Bourgeois loved. "In many cities, such as New York and Charleston, prewar construction comes at a premium," says Bourgeois. "The buildings have a lovely softness to them because the architects were driven by beauty rather than big egos. For example, the size of the windows and the dimensions of the rooms are appropriate in the space, not garish."

In many respects, this "challenge to be humble" is something that drives Bourgeois’s sensibility for interior design. The meandering three-bedroom, two-and-a-half-bath residence is filled with unpretentious, "authentic" objects—ones that reveal how passionate the artisans were about their work. A beautifully weathered old rake that Bourgeois purchased for $6 at a junk shop hangs along the staircase wall. The tool isn’t embellished or polished to a sparkle; it’s presented in its natural form. Yet it’s still interesting and it breathes humanity into the space, says Bourgeois. In the den, a stained English oak desk from the mid-eighteenth century has a charming patina from years of use; its simplicity lured Bourgeois during a buying trip in Petworth, England.

Many of her paintings express a sense of humility as well. Over the mirror in the dining room is a Russian Impressionist painting of a fisherman’s hands holding a net, and in the living room hangs an antique painting of a monk serving bread. "These paintings serve as reminders of our obligation to serve those less fortunate," says Bourgeois.

Even when her vision called for changes to the kitchen, the room where many homeowners would unleash a showcase of sheer grandeur, Bourgeois exercised restrained elegance. Viewing the kitchen as a workroom, she painted the existing lower cabinets and new upper cabinets—designed by her company and built at her son’s millwork plant, Sawtail LLC—a hue Bourgeois coins a "great dirty green." Replacing most of the upper cabinetry, open shelving provides an avenue to decorate with functional wares, such as pieces of antique hotel silver, stainless-steel demitasse cups, and white soup tureens that Bourgeois hauled back from Dijon, France, twenty-five years ago. "I love to cook, but not in a storage room," says Bourgeois. "For a great meal, all you need is fresh ingredients, sharp knives, a refrigerator, stove, running water, and a love of the process. Loving the room increases my affection for the process." At immediate glance, the choice of a durable copper backsplash may bare uncharacteristic flash. But Bourgeois has a long-term strategy in mind: as the metal ages, it will darken and take on more depth.

Moving beyond the breakfast area, foot traffic flows into Bourgeois’s favorite place in the house to relax: the formal living room. The room is comfortable, yet hints at luxury. It’s here that Bourgeois enjoys playing her small baby grand piano, or staring out at her front patio in the late afternoon from her traditional camelback sofa that’s slip-covered in silk. The space is rich with fabric, including the embroidered cotton drapes by Chelsea Editions from England. "Fabric quiets a room," says Bourgeois. Above the sofa hangs a dramatic English convex mirror from Circa Interiors and Antiques, a shop that Bourgeois frequents. On the end table sits one of many Neal Johnson Ltd. lamps in the house. Johnson has the ability to repurpose odd objects, such as this French fisherman’s water bottle, and create lamps that are real works of art, says Bourgeois.
While Bourgeois relishes winding down after working long hours, she says, "You can never have enough time with good friends." Often, she invites guests for simple dinners in her relaxed formal dining room. She chose a narrow white English oak table from Camden Antiques, so that people can mingle in close proximity.

When the evening concludes, Bourgeois escapes to her second-level master bedroom, which feels regal, but within limits. Again, she holds back from over-the-top indulgence. By combining a fabric headboard, Larsen Emperor Cloth in alabaster, with swathes of soft green silk and neutral cotton draping, Bourgeois achieves her goal for a restful bedroom. The crown above the bed is an Italian antique from Neal Johnson Ltd., originally meant for ornamentation over a door. Given Bourgeois’s thoughtful design, it’s not surprising that the pieces serve as more than just decorations. Bourgeois points out that, certain pieces can symbolize finding your purpose in this life. And with her cozy townhome, perhaps, by decorating with meaning, she’s learned to do just that.