In the hands of interior designer Lisa Sherry, a little less than perfect is nothing short of brilliant -- as her eclectic work/play pied-à-terre in the city shows perfectly 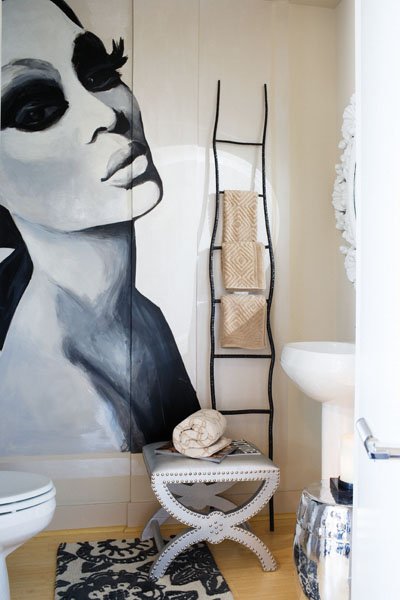 Lisa Sherry practices what she calls "counterintuitive design," mixing finishes and combining antiques with modern classics yet still achieving flawlessly sophisticated spaces. Her approach was exactly right for the studio she opened earlier this year in the MetLofts building in midtown. Splitting her time between High Point and Charlotte, Sherry needed the space to have a split personality — a work space during the week and a getaway on the weekend. "With Charlotte becoming such a hip, progressive city, we wanted a secondary office there," she says. "But it also had to serve as a weekend place for me and my husband," commercial photographer Ron Royals. True to form, she gave the 1,000-square-foot modern loft a European eclectic makeover. "Giving rooms a collected feel is all about not matching," she says. "You can’t be afraid to break the rules."

Equally suited to client meetings or casual breakfasts, the marble-topped Saarinen-style table is surrounded by Sherry’s choice of mix-and-match seating: a pair each of Philippe Starck Lucite Ghost chairs and gold-leafed French wing chairs with their original satin upholstery. "The fact that they’re a little less than perfect adds to the character," she says.

Teak box planters, turned upside down, make perfect cocktail tables. The contrast with the bamboo floors adds another layer of texture to a room rife with it. Sherry compensates for what she admits is "color phobia" by experimenting with a variety of materials, the resulting warmth striking a note she calls "casual luxury."

With twenty-foot ceilings, filling wall space was a priority. "One large piece of modern art can be very dramatic, but I liked the juxtaposition of lots of smaller pieces that contrast with the lines of the modern architecture and makes it feel warm and very lived in," Sherry says.

Ready for Your Close-up

One of Sherry’s staff designers, artist Jordan McDermott, painted the oversize grayscale portrait on one wall of the powder room for a dose of instant drama. The silver patent leather bench picks up the silver leaf used in the painting, while a black-and-white brocade Anthropologie rug continues the monochromatic color scheme. A curvy iron ladder by Oly stands in for a traditional towel rack.

Sherry custom designed two eight-foot-long daybeds upholstered in cotton velvet fabric. When clients come over, they can slide the dining room table up to them for comfy seating; they also become sleeping space for overnight guests. "I wanted them to be deep and comfortable. The cushions are down with large bolsters. It’s great to be able to design what you want for a space.
"Lots of light is always a prerequisite for me, and with the two-story windows, it’s like living in a glass box," says Sherry. "We wanted to keep it as open and as light and as bright as possible, and the view is so open toward the freeway you don’t have to worry about privacy."

Sherry haunts flea markets and antique stores (Metrolina, Sleepy Poet Antique Mall, and Atherton Mills in the historic South End are favorites) in search of finds like the tufted-silk French headboard that is the focal point of the loft’s only bedroom. "It has a small tear in it that adds to the character," she says. The floor lamps that flank the bed are also vintage; Sherry painted one with black lacquer to contrast with its gold-leafed distressed wood counterpart and the ecru west elm bedding coupled with white linen pillows and bone buttons.

For moments of extra solitude, Sherry improvised a velvet drape attached to a ceiling-mounted track that pulls across
the railing, closing off the second-floor bedroom from view.

Sherry walked to the nearby west elm to pick up this clean-lined desk, which she keeps in the bedroom to serve as a second work space. She accessorized it with a zebra-print Oly stool and starburst mirror.

Jill Waldbieser is an editor and writer whose work has appeared in Women’s Health, Popular Science, Philadelphia HOME, and New England Travel & Life, among other titles.