There are dozens upon dozens of styles of beer out there, all waiting for you to sample. But there's no reason to be intimidated. For one thing, all beers are either an ale or lager. Simple enough, right? For another, we've got a handy guide to the most common, complete with recommendations. A toast to expanding our brew palates! —A. M.

The patriarch of the beer kingdom, ales are brewed with yeast that ferments at the top of the fermentation vessel (today, a tank), and at a higher temperature than lager, usually between 60 and 75 degrees Fahrenheit. They usually have fruitier, more malty flavors, but the style range is tremendous.

Belgian Ale
For beer lovers, Belgium is the Promised Land, and this ale (even when brewed in America) has a distinct malty, fruity flavor and jump-outof-the-glass aroma.
You may have tried: La Chouffe
Local winner: Seven Sisters Abbey Style Ale from Highland Brewing Company in Asheville
Definitely try: Orval Trappist Ale from Brasserie d'Orval in Belgium

Brown Ale
Generally characterized by a lower amount of hops and more of a fruity, nutty aroma, brown ales are a great match for pork dishes as well as stronger cheeses, like Asiago or cheddar.
You may have tried: Newcastle Brown Ale
Local winner: Duck-Rabbit Brown Ale from the Duck-Rabbit Craft Brewery in Farmville
Definitely try: Indian Brown Ale from Dogfish Head Craft Brewery in Oregon

Amber Ale
This rosy-hued pint, usually an American brew, tends to be malty and fruity, but the hop intensity is across the board.
You may have tried: Fat Tire Amber Ale
Local winner: Highland Gaelic Ale from Highland Brewing Company in Asheville
Definitely try: Gouden Carolus Ambrio from Brouerij Het Anker in Belgium

Wheat Ale
Made with (wait for it …) wheat malt, these brews generally have a cloudy appearance, and can range from pale to dark, hoppy to not hoppy. expect a crisp flavor from the heavy carbonation.
You may have tried: Blue Moon Belgian White
Local winner: Hurricane Hefeweizen from Foothills Brewing Company in Winston-Salem
Definitely try: Allagash White from Allagash Brewing Company in Maine

India Pale Ale
Not for the faint of taste buds, generous helpings of hops give IPAs a fragrant, herbal aroma, but a fierce, bitter bite.
You may have tried: Sierra Nevada Celebration Ale
Local winner: Sisters of the Moon from Mother earth Brewing in Kinston
Definitely try: Epic Armageddon IPA from Epic Brewing Company in New Zealand

Lambic
In this brewing process, the fermentation vessels are left open, leaving the beer to ferment using wild, airborne yeasts and bacteria, after which the beer is usually aged. This produces a tart, sour taste.
You may have tried: These are few and far between in the U.S., but you may have seen Lindemans Framboise (raspberry)
Local winner: Zilch. except for the one waiting to be brewed in your basement
Definitely try: Cantillon rosé De Gambrinus from Brasserie Cantillon in Belgium

Porter
Often thought of as stout posers, porters have a dark, smoky flavor from their extreme maltiness—typically, they're packed with smoked or chocolate malt. Hops are generally well balanced, and they often have a sweet flavor.
You may have tried: Geary's London Porter
Local winner: Duck-rabbit Porter from Duck-Rabbit Brewing in Farmville
Definitely try: Entire Butt English Porter from Salopian Brewing Company in England

Stout
This type is typically very dark, nearly opaque, and uses roasted barley to give it a smoky, almost burnt taste. Flavors like chocolate and coffee are very common, and the addition of lactose or oatmeal can make for an even fullerbodied brew.
You may have tried: Guinness Original
Local winner: Black Mocha Stout from Highland Brewing Company in Asheville
Definitely try: Rogue Chocolate Stout from Rogue Brewery in Oregon

Barley Wine
Despite the misleading name, this is a wide-ranging english-style ale with sometimes fruity, sometimes hoppy aromas. The bitterness can span up and down the spectrum, but one thing that never changes is the high alcohol content — almost always more than 8 percent.
You may have tried: Sierra Nevada Big Foot
Local winner: Duck-rabbit Barley Wine
Definitely try: Hog Heaven Barley Wine from Avery Brewing Company in Colorado 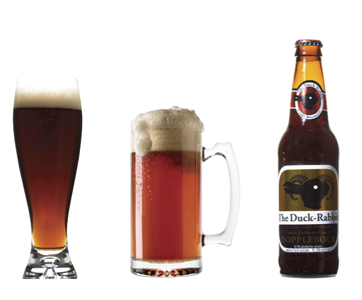 Lagers are made at colder temperatures than ales with yeast that ferments at the bottom of the container. They're typically less aromatic than ales, but it allows for other ingredients, like hops and malt, to make an impression. Most of the better-known domestics are very light versions of lagers, while Yeungling and Sam Adams each make a more traditional basic lager.

Pilsner
A style of lager that originated from Czechoslovakia, back when it was still Czechoslovakia, these beers generally have an even hop-to-malt balance, with a refreshing, floral taste.
You may have tried: St. Paul Girl
Local winner: Foothills Torch Pilsner from Foothills Brewing Company in Winston-Salem
Definitely try: victory Prima Pils from Victory Brewing Company in Pennsylvania

Bock
This high-gravity German beer has little to no hop influence, instead concentrating on the malt flavor. It generally takes longer to store (cold, of course) because of its strength.
You may have tried: Sam Adams Winter Lager
Local winner: Yule Bock from the Olde Mecklenburg Brewery in Charlotte
Definitely try: Smuttynose Maibeck from Smuttynose Brewing Company in New Hampshire

Doppelbock
The stout of lagers. Typically very dark in color, with an intense amount of malt, and an even more intense amount of alcohol, these are very serious winter beers.
You may have tried: These don't exactly line the beer coolers of grocery stores nationwide, but Spaten Optimator is a popular one, and even Sam Adams has done a special release.
Local winner: Duck-Rabbit Dopplebock
Definitely try: Aventinus Wheat Doppelbock from Schneider-Weisse in Germany