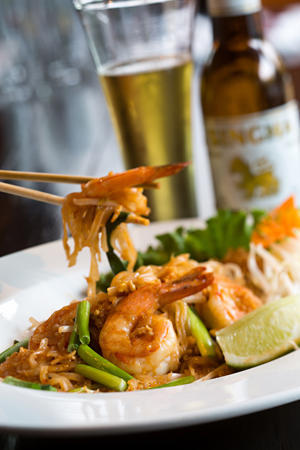 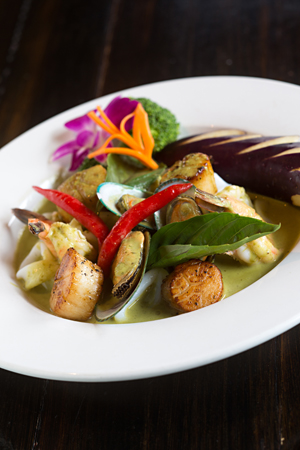 > Deejai Thai
The intimate and softly lit dining room makes for a great date night at this Thai and sushi restaurant, and classics such as the pad thai and larb are authentic. But lesser known dishes such as namsod are worth trying, and menu descriptions help diners make an informed order.
613 Providence Rd., 704-333-7884

> Basil Thai
Walking into the uptown location of Basil Thai, you may think you’ve mistaken a spa lounge for a restaurant, but the scent of lime leaves and spice tells a different story. Searching for a substantial dish? Go for the crispy red curry duck. The deep-frying keeps the bird incredibly moist while the red sauce adds just enough spice.
210 N. Church St., 704-332-7212
7800 Rea Rd., 704-900-6522

> Thai 1st Bistro
The paper umbrellas hanging from the ceiling are as colorful as the yellow, red, and green curries coming out of the kitchen at Thai 1st. If you’re looking for something different, try the Thai Lover: tender shrimp, chicken, cashews, peppers, scallions, and pineapple in a flavorful and spicy massaman curry.
9824 Rea Rd., Ste. B, 704-541-9099

> Monsoon Thai
In a rundown strip mall on South Boulevard, Monsoon Thai supports the notion that sometimes, the best eateries are found in the most unassuming places. Inconspicuous as the restaurant is, the flavors are wildly authentic. The menu includes dishes such as soft shell crab and several offerings of duck, along with traditional fare. Note: If you order it Thai hot, prepare for some serious spice.
2801 South Blvd., 704-523-6778

> Thai Taste
Pad thai is a simple and unintimidating Thai dish, with neither a pricey cut of meat nor strenuous cooking method. But perhaps due to some of the lesser-known ingredients, such as tamarind juice and fish sauce, home cooks end up stumped when trying to re-create what they’ve had in restaurants.

Pad thai is eaten frequently for lunch and dinner in Thailand, and diners in Charlotte enjoy it the same way. At Thai Taste on East Boulevard, members of the staff say they “can’t even count” how many plates of the delicious noodle combination, the most popular dish on the menu, fly out of the kitchen. The restaurant opened in 1988—making it one of the original Thai restaurants in the city—and has since expanded to locations in Matthews and the University area.