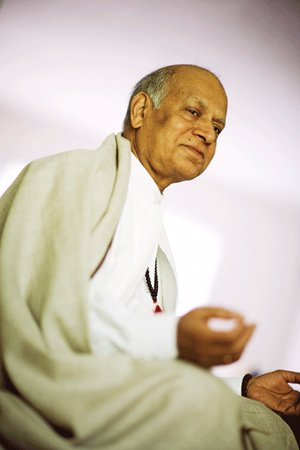 Ranjit Deora is not a typical yoga instructor.

There are no yoga mats. There are no downward-facing dogs. Rather, Deora's students, clad in business suits and skirts, often sit not in front of a mirror posing but at conference tables.

With his Corporate Wellness program, Deora, seventy, helps executives at Bank of America find Zen without loosening their ties. Deora, who began meditating at fourteen, insists that his program blends seamlessly with the typically straight-laced corporate boardroom environment. "You can do this in a suit and tie," he says of the nontraditional mediation atmosphere.

Each one-hour session begins with tension-busting stretches (think rolling out wrists, necks, fingers, and back), followed by breathing and meditation exercises. After studying with Deora, executives say they're better equipped to handle high-powered jobs and workplace stress. "I use the breathing techniques to focus at work," says Rasheedah Hasan, Senior VP at Bank of America. "Distractions float away."

Deora first hatched the idea for a corporate program in 2006, when a private client was struggling with work-related anxiety. Research revealed that major corporations such as IBM, Chase Manhattan, and Pepsico, used yoga in the workplace to relieve employees' stress. Inspired, Deora approached Bank of America and offered to teach a complimentary demonstration, which was so well received by BofA execs that the bank has since hired him to host several six-week sessions.

Perhaps the unlikely pairing of guru and conglomerate is successful because Deora himself was once a travel executive. Three decades ago, work took him from Udaipur, India, to Manhattan, where he balanced the stress of business with meditation and deep breathing. When his son enrolled at UNCC, Deora and his wife, Meera, moved to Charlotte and founded their company, Yoga Health Solutions. Based in his Matthews home, the company hosts community workshops and private meditation classes.

Deora hopes to share his program with more Charlotte corporations. "I see myself as a resource," he says. "I want to distribute a joyful state of mind."

This article appears in the June 2008 issue of Charlotte magazine.
Categories: Buzz > Spotlight
Contest of the Month