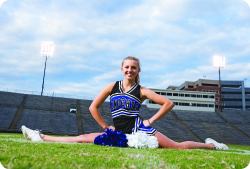 A lone football hurtles through the looming dusk, a fanfare of blue and white pompoms flutters, and the crowd, buzzing from Charlotte Christian School’s first-quarter touchdown at this Friday-night game against Victory Christian, obeys the command: “Fight, Knights, fight!”
Once the pompoms have settled and the high kicks are over, the squad turns back around to watch the first quarter. The cheerleaders stand patiently, poised with their poms behind their backs. Standing in the second row, shifting her weight from one foot to the other, is Bailey Thompson, a bright-eyed, blonde sophomore.

Bailey likes math and science class at school, and she’s even won a couple of school art contests. But this is what it’s all about for Bailey—the crowd, the yelling, the hum of energy in the stands. “I just like performing in front of people,” she says.

Bailey’s been cheering since she was in elementary school at Weddington, since her aunt, who used to be a Panthers Top Cat and was one of the original Charlotte Hornets Honey Bees, piqued her interest.

“A lot of people tell me that cheerleading isn’t a sport,” the All-Conference cheerleader says. “I think it’s just as athletic as other sports. We have a very high injury rate.”

The CCS cheerleading squad, a group of nine such athletes, returned from a summer cheerleading camp at Appalachian State University with a first-place trophy just a month before the Victory Christian game. Bailey won three awards: Best Jumper, Best All Around (she can be both at the base of stunts as well as a “flier”), and a Pin-It Award, given to twelve out of nearly 100 girls for leadership and spirit.

Cheerleading is not just a one-season celebration of football. Bailey takes tumbling classes twice a week, spends all year doing conditioning in the weight room, and runs the 100- and 200-meter dashes for the spring track team, all to stay in shape for cheerleading. And the squad pratices three days a week with CCS coach Karen Dean, who, says Bailey, “keeps us on task.”

Bailey craves the thrill of crowds, like at the homecoming game. “The adrenaline you get from homecoming games is crazy,” she exclaims. “It gives me the extra push to do well, in front of a big crowd.” —A. M

The Manor Theatre Has Closed. Is This Our First Last Goodbye?

COVID-19 in Charlotte: A Timeline