The Cracker Kingdom’s New Ruler: A Look at Lance, Then and Now

The company stayed homegrown and humble over its first century. Can it still, now that the Campbell’s Soup folks own it?

Sandra Walker is the type of lifelong Charlottean who, when you ask if she’s from Charlotte, tells you, No, but thank you for asking. She’s from Indian Land, South Carolina, back “when it was all country.”

Today, at age 67, Walker lives in a much different Charlotte, one that encompasses Indian Land in its ravenous regional sprawl. Indian Land is home to Red Ventures, the Google-like technology company, and its expansive campus, with a basketball court, food trucks, and nearly 4,000 employees.

In Walker’s lifetime, Charlotte’s population has more than sextupled, having grown from a textile manufacturing hub of about 134,000 to a nouveau-Southern metropolis of nearly 873,000 residents, skyscrapers, and two professional sports teams with a third on the way. One thing that hasn’t changed for Walker—at least not in 47 years—is her employer. She’s worked at Lance, Inc., the nationally renowned cracker company, since 1973, when she was 20. She started as a “packer,” placing the company’s sandwich crackers into boxes, when Richard Nixon was president and John Belk was Charlotte’s mayor.

“I didn’t know a lot about Lance,” Walker says in a bustling coffeehouse in Steele Creek, not far from her home. “But then I started hearing things, like it was such a good company to work for and good people to work with.”

The company’s ties to the city are even older. Philip Lance established the first in 1913 when, after a mix-up with a customer, the food broker was stuck with 500 pounds of peanuts. To recoup his costs, Lance sold bags of peanuts for 5 cents each on the corner of Trade and Tryon, steps away from what is now Charlotte’s Epicentre. 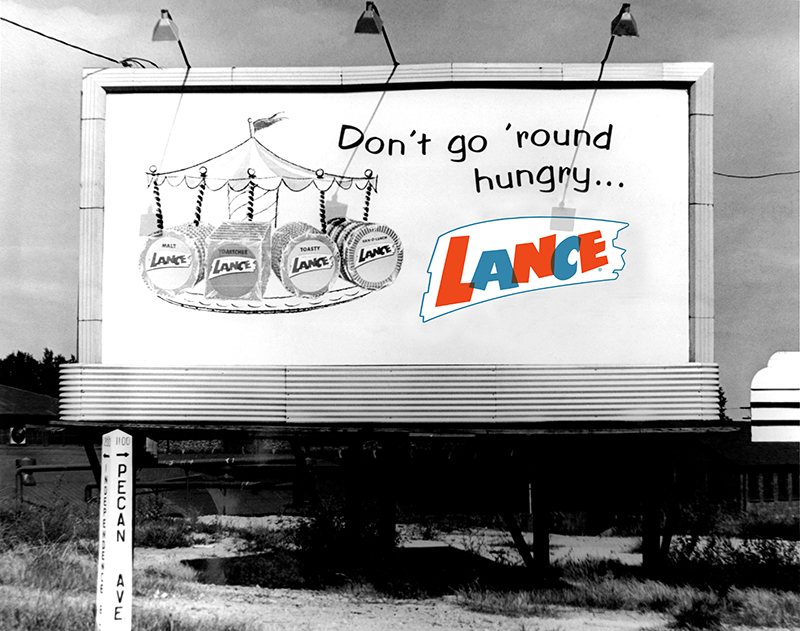 A 1955 billboard advertised Lance Crackers at the corner of Pecan Avenue and Independence Boulevard. Courtesy of Philip L. Van Every Foundation.

The snacks were a hit. They continued to evolve thanks to the ingenuity of his daughter, Mary Arnold Lance Van Every, who had the idea to grind the peanuts into peanut butter and spread it between two saltines. It sounds obvious today, but those became the world’s first commercially sold peanut butter cracker sandwiches.

“Lance’s is one of the great success stories of Charlotte and the Carolinas,” Tom Hanchett, historian in residence at the Charlotte Mecklenburg Library’s Robinson-Spangler Carolina Room, told WTVI in a January documentary about the company.

By 1973, the year Walker started at Lance, the company had grown from just Lance and his son-in-law, Salem Van Every—who joined him in 1915, doubling the company workforce—to an $80 million company with 4,500 employees in 34 states. 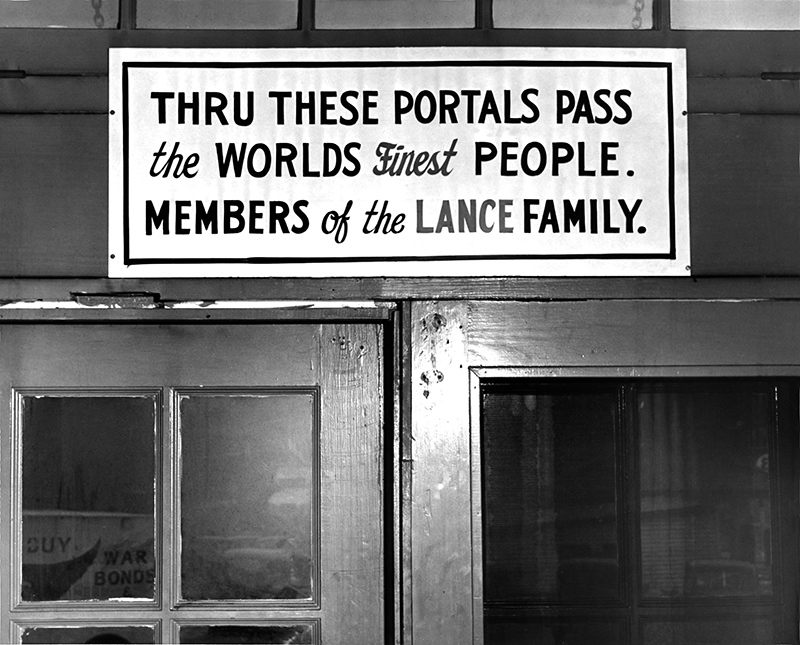 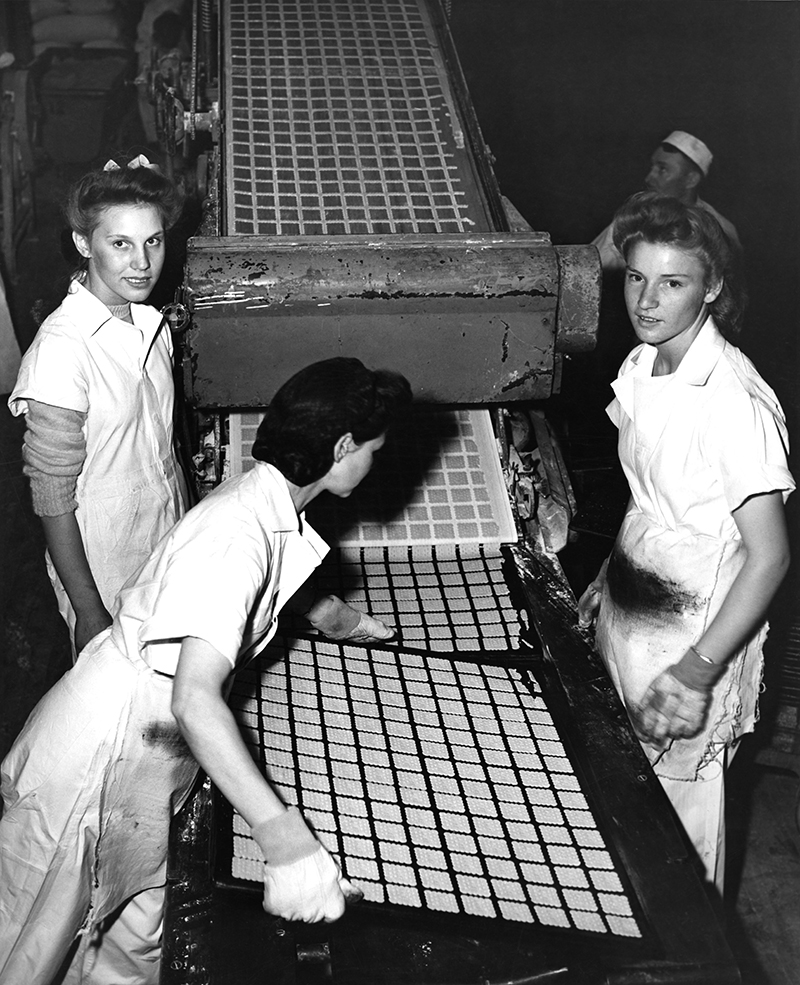 Company culture played a big role in the business, and employees were treated like family. Courtesy of Philip L. Van Every Foundation.

But it remained where it started, in Charlotte. Walker still works at the factory at 8600 South Boulevard, an address she’s memorized after nearly five decades. When she started working on the line, she was one of 26 people who worked multiple shifts to feed packaging into machines and pack crackers into boxes.

Two years after she started at Lance, a utility worker named Karl Walker caught a glimpse of her—and kept staring. Soon the couple went on their first date to play pool at a bowling alley on Independence Boulevard. (She doesn’t remember the name; it’s not there anymore, anyway. She does remember that he won.) Forty-three years later, they have two children, two grandchildren, and still attend the United House of Prayer For All People. 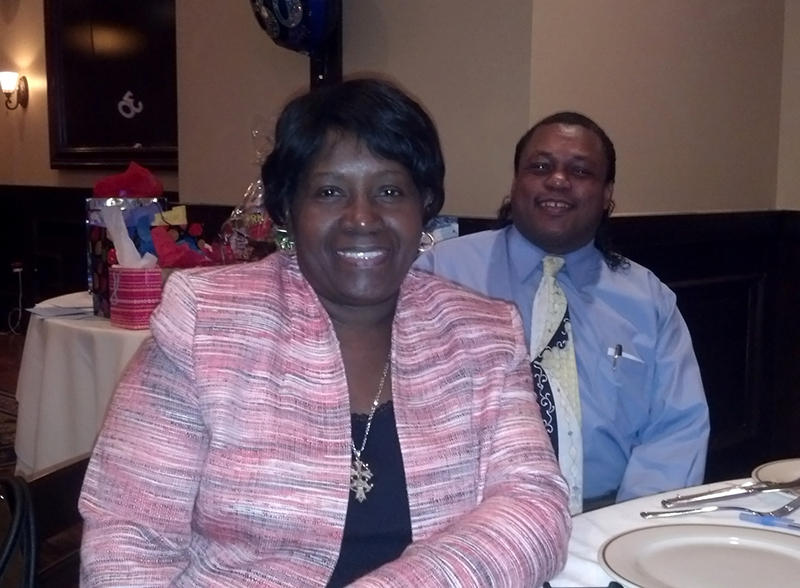 When Sandra Walker began her career at Lance in 1973, she was one of 26 people who worked multiple shifts. She met her husband, Karl, two years after she started at Lance. Courtesy photo.

How does a company that specializes in peanut butter cracker sandwiches thrive for 107 years? How does a company built on tradition and light on innovation survive in 2020 amid grocery store aisles of snack competition and flashier choices like Birthday Cake Oreos and Little Debbie Zebra Cakes?

For much of its first 25 years, Lance was primarily a candy company. That all changed with World War II and sugar rationing, but the Lance peanut brittle recipe, which came from a soldier at Camp Greene during World War I, is still a favorite among the Lance and Van Every descendants.

Lance reached its first $1 million in sales in 1935, in the thick of the Great Depression. Much like today with the coronavirus pandemic, the economy tanked, people lost their livelihoods, money vanished. But Lance emerged stronger than ever.

“It’s largely because you could get a great pack of crackers for a nickel a pack,” Quincy Foil White, Salem Van Every’s great-granddaughter and current chairwoman of the Van Every Foundation, told WTVI in January.

The price helped, but Hanchett says there was more to the recipe than that. “The whole notion of manufactured food, corporate food, was really cutting-edge at that point,” he adds. The number of textile mill workers who lived and worked in Charlotte was, perhaps, an even bigger reason for the company’s success. “Ten hours on the factory floor and you want a little bit of a snack,” Hanchett says. “There’s this need by working folks to have something that fits in your hand, that’s wrapped, and Lance fit into that niche that no one knew existed.” 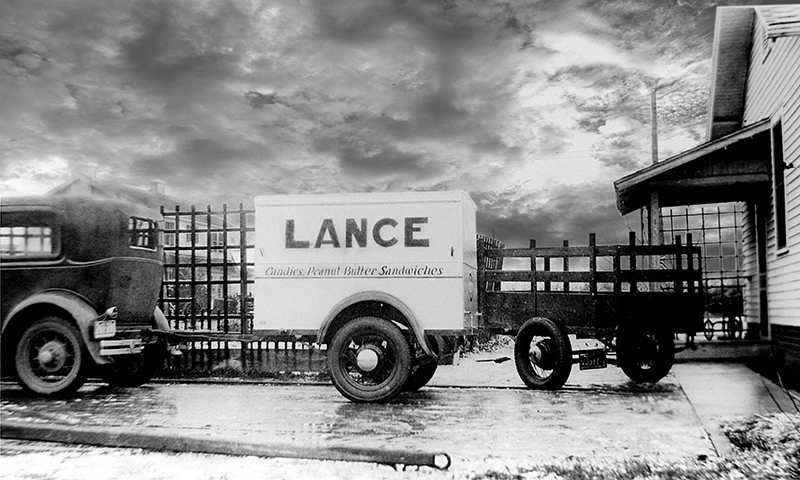 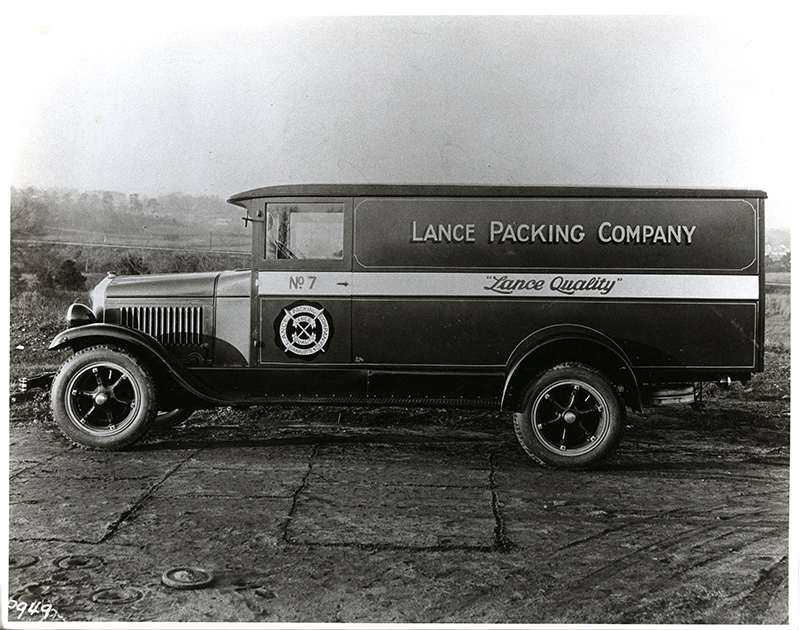 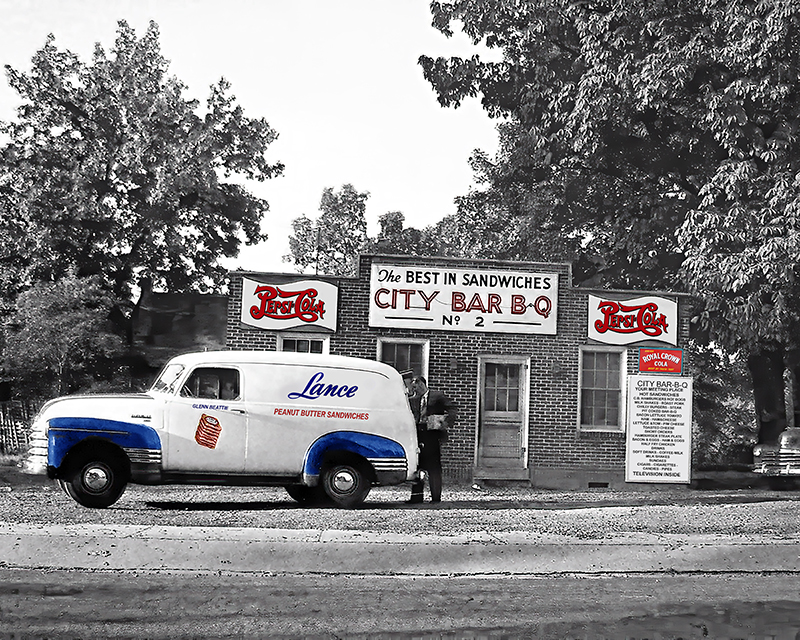 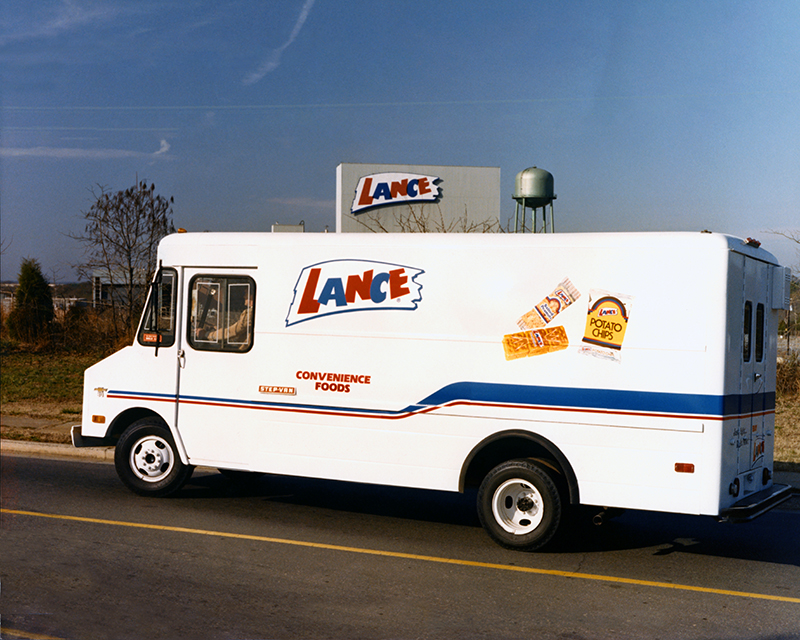 While Philip Lance started selling roasted peanuts on foot, the method of transportation has evolved throughout the years.

Eight years later—amid another crisis, during World War II—a death shocked the company. On Easter Sunday 1943, Salem Van Every, Philip Lance’s son-in-law, died. He left his 29-year-old son, Philip Van Every, in charge of the company, which had grown to $9 million in sales (about $134 million in today’s dollars).

“He was 29 years old and found himself at the head of a company,” White says. “What in the world’s he going to do? You know, that’s a big responsibility.”

Van Every, who would later serve as Charlotte’s mayor from 1953 to 1957, turned the company into one of Charlotte’s biggest success stories. As the cracker company expanded—it hit $14 million in sales in 1950, $26 million in 1960, and $80 million in 1973, the year Van Every retired—he was careful to maintain its Southern, family-sown roots.

The company delivered two prayers every day—one at 9 a.m., before the first shift, and one at 5 p.m., before the second—over its loudspeakers. It celebrated Thanksgiving each year with a feast for its employees at the factory. Christmas parties were at the old Carolina Theatre in uptown, steps away from where Lance sold the first nickel bags of peanuts in 1913.

When Van Every retired, he was the last in the family to run the company. It was an early foreshadowing of larger changes.

In December 2010, Pennsylvania-based Snyder’s of Hanover, a purveyor of potato chips, pretzel sticks, and other salty tidbits, announced a merger with Lance that created a new, combined company, Snyder’s-Lance. The new company’s CEO, David Singer, hailed the “strategically compelling merger” as a marriage of the two brands’ “strengths in salty, cracker, and cookie snacks.” Suddenly, the company—though still based in Charlotte—was one wing of the country’s second-largest snack empire.

Eight years later, consolidation struck again. Philip Lance had started his company with only $60. In 2018, Campbell Soup Co. bought Snyder’s-Lance for $50 per share in an all-cash transaction, which represents an enterprise value of approximately $6.1 billion. The biggest immediate change: It was no longer a Charlotte company. Campbell’s is based in Camden, New Jersey. 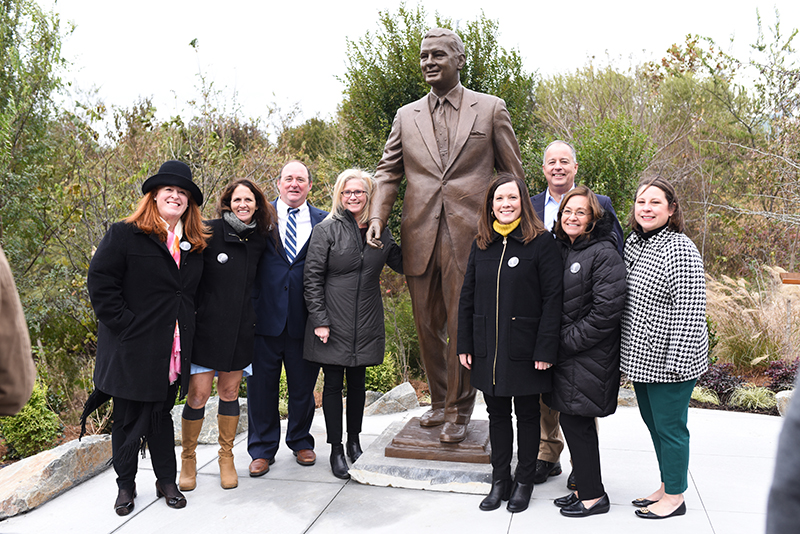 A bronze sculpture of Philip Van Every was unveiled on the Trail of History along King’s Drive in 2019. Grandchildren of Van Every include (left to right) Pebbles Glenn Nix, Anne Glenn Rettiger, T. Glenn, Quincy Foil White, Carolyn Sisk Williams, Marty Foil, Mary Lance McGinn, and Peaches May. Photo courtesy of Philip L. Van Every Foundation.

Externally, the Campbell’s purchase doesn’t appear to have changed much, although Lance is now just a partner in an empire after nearly a century as its own. Internally, what’s changed is smaller, subtler. Campbell’s offered its new employees $50-per-share company stock buyouts, which Sandra Walker accepted; she’d held the stock for decades. After a quarter-century as a packer, Walker has worked for the past 20 years in the company store, where people can buy their favorite Lance products. For years, she says, ToastChee reigned supreme. Now, Cape Cod potato chips, an old Snyder’s product, are the Lance store’s top seller. And she works on an iPad now rather than a cash register, a change she says she’s still adjusting to.

Today, Walker says, only six people work on the packing line. Robots do her old job. Karl, who left Lance after about five years and is now retired, knows better than to try to coax his wife into retirement, too. “I like working there,” Walker says. “I like being busy.”

Even as the pandemic eliminates jobs worldwide and overwhelms unemployment offices, Walker is still at Lance, selling chips and cracker sandwiches in the store at 8600 South Boulevard—although now, with the virus around, she wears gloves every day. She has no immediate plans to retire from the only company she’s ever known. She makes $23 an hour, up from the $86 a week she made when she started.

Jared Misner is a writer for this magazine. His work has also appeared in Our State, The Chronicle of Higher Education, The Knot and Logo.

Nekot cookies are (allegedly) so named because they were originally circular and called “Token” cookies. One day, the wrapping machine packaged them inside out. Nekot is “token” spelled backwards, and the name stuck. 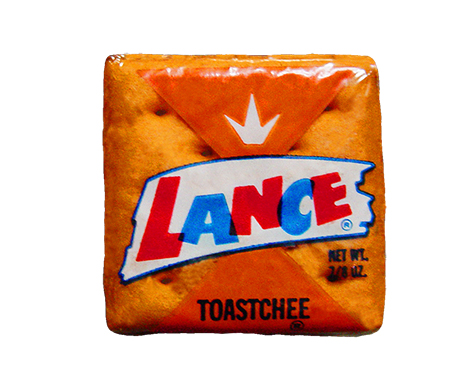 Whatever you do, don’t call these “Nabs.” That’s short for Nabisco, a competing snack and cookie company.

Philip Van Every used to bring peanut oil home from the factory for the women in his family to sunbathe with, according to Quincy Foil White.

The popular Captain’s Wafers are named after Van Every’s boat captain at his beach house in Georgetown, South Carolina.

A BRIEF HISTORY OF LANCE 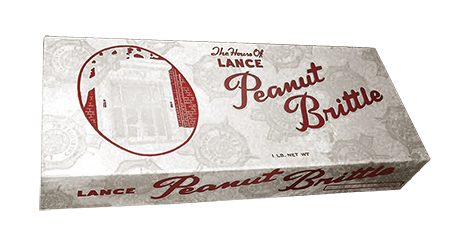 1914: A soldier from Camp Greene shares a peanut brittle recipe which becomes a popular Lance candy

1943: Philip Lance Van Every becomes president and CEO, a position he would hold until 1973

1961-1990s: Lance moves from its third location to its current facility at 8600 South Boulevard. The old factory in historic South End (above) becomes a mixed-use
building in the late 1990s

2010: Lance merges with Snyder’s of Hanover to become Snyder’s-Lance