Mecklenburg commissioners gave chairman silent treatment before voting her out 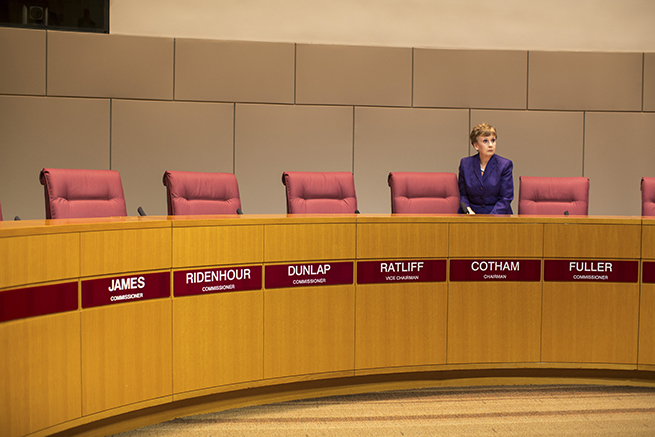 Pat Cotham stands next to her seat in this June 2013 photo.

Before the meeting even started, Pat Cotham moved her car.

For the past year, she’s parked in the same spot at the government center, the spot reserved for the chairman of the Mecklenburg County Board of Commissioners. It’s in the basement of the building, right next to the county manager and the city mayor.

Early Tuesday afternoon, hours before her colleagues removed her in a surprising vote, she already knew the spot wasn’t going to be hers anymore.

She knew because of their silence.

For months, she talked to her friend and commissioner Vilma Leake three times a day. Leake stayed by Cotham’s side during even the toughest times, when Cotham led the firing of then-County Manager Harry Jones. Leake and Jones are members of the same church, take advice from the same minister, and still Leake defended Cotham’s decision—to the point of calling another commissioner sexist one night.

Still, she drove to the government center on Tuesday and prepared for the commissioners meeting that night. She parked in the chairman’s spot, right next to the county manager and the new mayor, Patrick Cannon, who’d just been sworn in the night before.

It was only a year ago that she parked in the same spot for the first time, right next to Jones and then-Mayor Anthony Foxx. Things have changed.

When she led the charge to fire Jones in May, she upset people—especially Democrats and the black community. She didn’t let Jones speak that night. She didn’t let him gather his things. That upset those people more. They never let it go. Commissioner George Dunlap vowed in a public meeting to not to be silent “until such time there is another election.”

He stayed true to that.

“I’m not surprised that there are some people who will, to their dying days, be upset about it,” Cotham said Wednesday morning in a phone conversation, about 12 hours after the vote. “But they’re out for their friend. I brought a business sense to the board.”

Cotham has been criticized for her lack of compassion the night of the Jones firing. She insists she was following the rules, same as always. I followed her around for about six weeks in May and June for a feature story for this magazine, and she consistently showed personality quirks that revealed a person rigidly bound by rules, even if it comes at the expense of politeness.

She stopped our phone conversation after about 20 minutes Wednesday rather abruptly, saying, “I didn’t know it was going take this long. I have other people I’m supposed to call back.”

“I think that’s the Catholic School in me,” she said later. “I went to Catholic School for 12 years. I’m a rule-follower. I put my grocery carts back in the slot, things like that. The rules are there for a reason.”

It was her attention to rules and routine that tipped her off Tuesday. On the agenda for that afternoon was a meeting with Trevor Fuller, another commissioner and another Democrat. Fuller, too, had been a supporter of Cotham’s. He campaigned with her last year, when she was the top vote-getter in the general election and he was third. He voted for the Jones firing. And although he was critical of the way she handled it, he was more forgiving than his Democratic colleagues. While other commissioners swore to inflict vengeance on Cotham, Fuller remained moderate, regularly offering public pleas for the commissioners to get along.

Fuller didn’t show up for his meeting Tuesday.

As the meeting drew closer, Cotham started making phone calls. She heard from friends in the Democratic Party, who told her that she was finished.  She called commissioner Dumont Clarke.  He didn’t answer, but he did call her back, she said.

“Trevor’s got the votes,” Clarke told her.

The commissioners start with a dinner meeting at 5 p.m. Most of them were late. So Cotham used the free time to move her car out of the chairman’s spot.

The dinner meeting started at 5:15. They all talked. They held a closed session and talked some more. After the closed session, they stood up. Fuller tried to speak to Cotham.

Then she was left in the room with Leake. Cotham didn't tell me what she and Leake talked about, other than that it was “enlightening.”

Cotham sat in her chair at the center of the dais. She opened the meeting. The vote started. All of the Democrats on the board, except Cotham, voted for Fuller. All of the Republicans voted against Fuller. The vote was 5-4 in favor of Fuller. Each vote for him was a vote against Cotham.

She stood up from her chair and insisted that Fuller take the chairman’s seat. She’d already checked with the clerk about that, too, and she’d learned that she must give up her seat immediately, according to the rules.

She was nominated for the spot of vice chairman. She turned it down. Why?

“I know what it’s like to be the chair and not have the support of the vice-chair,” she said Wednesday, referring to former vice-chair Kim Ratliff. “I didn’t want that for the county.”

Cotham stayed for the remainder of the meeting as a commissioner. She’ll stay in that role for another year, until the November election.

Cotham said on Wednesday that she’ll serve on the board. And she’ll run for re-election next year. She’ll just be in a different spot.