We used to dream of flying cars and cities on the moon. Now we just dream of a city that lives together, works together, and solves problems together. This is what life might look like for the average Charlottean 45 years from now1 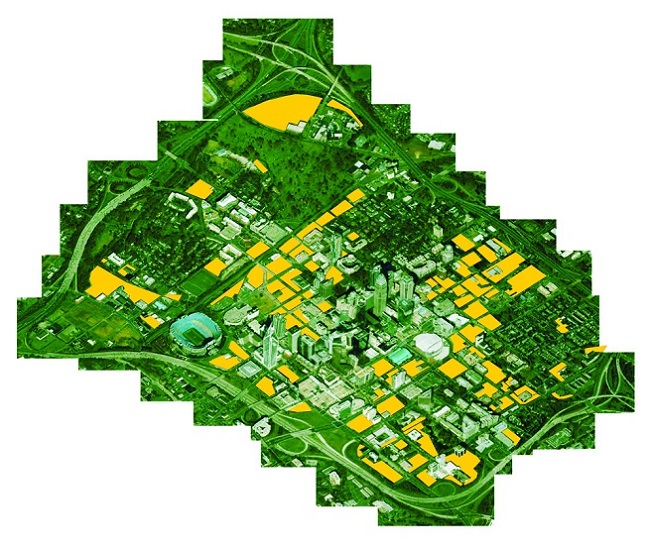 Hover over the image to experience two incarnations of Charlotte — 2013 and 2058. Click on it to see a larger version.

This piece features notations. Hover over the red numbers to see references and additional information.

You came along at a good time. You were one of about 500 children born at Carolinas Medical Center in September 2013, keeping with the average monthly rate for that year. You were just one of many—the story of your life.

Happy middle age, by the way. You look great for 45. Must be all the walking.

On nice evenings now, sometimes you’ll take the train into uptown with your daughter and look around and tell her how much the place has changed—or hasn’t.  About three or four new skyscrapers have risen from Tryon Street in your lifetime 2. But nothing tops the old bank tower at Trade and Tryon. That’s still the tallest building in town, and Charlotteans are proud of it. Inside the main lobby is a portrait of a man named McColl. You learned about him in school, along with names like Gantt and Crutchfield and Foxx. You memorized their names, passed a test, and forgot them. You can look them up anytime you want on any number of digital screens in your digital home. Or, even better, your parents can tell stories about when those men were still around.

Your parents have stories. They’re grandparents now, and they love to tell tales of taking the blue line from South End uphill both ways. They’re on the older end of the millennial generation. We built this city for them. In fact, almost everything we made in the first half of the 21st century, we built either for millennials or baby boomers. There was a generation in between—Generation X—but they’re a smaller group, and they keep to themselves 3.

The city changed quite a bit in the years after you were born. All cities did.

The boomers craved community as they grew older. Sons and daughters of World War II, they aged far more gracefully than any generation in history. When they were born in the late 1940s and early 1950s, the average American lived 68 years 4. By the time they reached senior citizen status, that number was closer to 80. And now, with your generation’s advances in medicine, you should live to be 90 5.

When those boomers grew old, they wanted to live close together. They wanted to be within walking distance of grocery stores and theaters and community centers. They wanted to drink an afternoon beer. We’d never seen such an active elderly generation. They didn’t want to be old. We retrofitted our neighborhoods to suit them.

Meanwhile, the millennials, those now-aging people we called hipsters and you call Mom and Dad, they craved downtown living too. It wasn’t because of their age, though. They loved it naturally. They were the first generation since the automobile revolution in the mid-20th century to choose to live in downtown areas 6.

You might not believe this, but before you were born, people shunned city living. Big, sprawling developments dominated the region’s growth in the 1990s and 2000s. We had houses that were four and five bedrooms. McMansions, we called them.

Then something happened. As technology advanced and we expanded our digital lives and talked to people halfway around the world in mere seconds, we stopped expanding our physical living spaces outward. Around 2010, about three years before you were born, people started to come back to downtown. That year marked the first time in years we saw Mecklenburg County growing at a faster rate than surrounding counties 7.

So what’d we do? We South-Ended Charlotte. We sent public transportation lines east and west and north, and we built around those lines, the same way we built around the blue line in the years before you were born. We built mixed-use buildings, apartments on top of shops and boutiques and restaurants. We built them in Second Ward at a feverish pace 8.

The area was once a black neighborhood called Brooklyn, then was demolished and cleared for a jail, then sat mostly undeveloped throughout the early 2000s. Now it’s filled with these mixed-use buildings.

More than 50,000 people live inside the Interstate 277 loop in September 2058 9. That’s a wild number, considering only 15,000 lived there in 2000. They have everything they need. You might not remember a time when every family had two cars that guzzled a gallon of gas in only 20 or 30 miles. Those were the days! Now, in the one-car-per-family world of the 2050s, with most cars doubly efficient, you laugh at that kind of consumption.

If the generations  that came before you were the generations of excess, you’ve succeeded in scaling back humanity. You’ve moved down in size of living space, size of family, and number of cars. It was a necessary step: You had to learn to live around your neighbors.In 2010, Mecklenburg County’s population was 919,000. By 2050, it was 1.67 million 10. Continuing at that rate, it’s at 1.8 million now, in 2058. Think about that for a moment. When you were born, this was already a big city. Then it doubled.

The surrounding area is no different. In the 14-county Charlotte region, population went from 2.4 million in 2010 to 4.24 million in 2050. That’s comparable to what the Boston region was in 2010. You live in a big, important place now.

The reasons for Charlotte’s explosion in your lifetime are obvious: In the 2000s, North Carolina was an ideal growth state. People moved here to escape the weather of the north, and they bought land at fairly inexpensive prices.

The growth scared some people. The year you were born, a conservative state legislature made national news, passing laws that tried to keep things the way they were, or the way they’d been13,14,15.

So people were moving to North Carolina in droves, and people were moving to cities in droves 12. For Charlotte, North Carolina’s largest city, the combination of trends made for an explosive mix.At the same time, the national and worldwide trend was to move to cities. In 2013, a little bit more than 50 percent of the world’s population lived in urban areas. By 2050, that number jumped to 75 percent 11.

Eventually, people kept coming to the state, though, and we all had to get onboard.

City leaders scrambled to keep up. They almost didn’t pass the streetcar that connects the east side of town to the west side of town. Yes, really. There was a time when that wasn’t there. It opened around the time you were 6 or 7 16. You might remember your mom and dad taking you on your first ride. You also don’t know a time without the blue line light-rail extension, north to the university area 17. Those are old transit systems now, so it’s hard for you to imagine a time when they weren’t here.

You were away at college in the 2030s, when the city and county finally finished the red line, connecting uptown Charlotte to Mooresville via commuter rail 18. You graduated, went on to get your master’s, and then came back—you’ve moved a half-dozen times in your life—and then you really started to see Charlotte change. Because you started to change it.

You became part of the conservation generation. Providing safe drinking-water supplies is becoming one of the world’s top challenges as the global population approaches 10 billion 19. There are more people, and those people are living longer. In the United States alone, the increase in average life expectancy in your lifetime—from 80 to 90—is estimated to cost $8 trillion in resources and medical care and everything else it takes to pay for old people who live longer 20. You take after your parents, and you live to protect.

You live in a home that’s about 1,500 square feet, and you made a nice, modern living space for your parents in the backyard, where the old garage used to be. It’s called multigenerational living 21.

You walk everywhere you go, and your parents and friends do the same, whether in high-end neighborhoods like uptown or Plaza Midwood or Dilworth or Wesley Heights 22 or a little farther out. When we started to see that this was what the market demanded, we demolished the old, land-gobbling shopping centers that were once the centers of those areas 23, and we turned those parking lots into the grid road system you know and love—the same way your great-great-grandparents loved them in the 1920s.

You work from home or you take a quick train to work, so it’s nice to get out and walk on the streets in the evenings 24, under Charlotte’s tree canopy, now at 50 percent 25.

Your home, although smaller, is full of nice things. Quality over quantity. You have antique furniture and hardwood floors, made from sturdy wood—something you can touch, something that helps you pull you away from the growing intrusion of technology in your life 26. You change your wallpaper all the time, and it’s not a great hassle. Digital wallpaper sprang up as the interior design trend of the future in the late 2020s and early 2030s, about the time you graduated high school. You can learn the history of the digital home without too much trouble. Just stand anywhere and ask, and a computer will answer for you.

Your stove is run by a touch screen. When you brush your teeth, you can check your email in the mirror. Your entire life is surrounded by screens that descended from the iPhone or iPad or whatever those ancient devices were 27.

As you've grown older, you and your friends have started taking an active role in the city. Some even serve on City Council.

The greatest community symbol of that change came in the 2030s, when a town named Eastfield formed along the red line—on land that was just farmland when you were growing up. Eastfield is now the Ballantyne of North Charlotte. But it’s better-connected than Ballantyne. Eastfield is a walkable town, a model for new suburbs around the globe28.

On the matter of suburbs, boy, were they a challenge. We weren’t prudent in our road-building in the late 20th century. Why we abandoned the grid system in favor of major arteries, we’ll never know. We apologize, still, for Independence Boulevard, perhaps our greatest transportation mistake. You call it Interstate 74 now, but we’ll always remember it as the road that reminded us that we can’t just pave our way out of transportation problems 29.

We struggled to rebuild our suburbs with more roads, to try to pull pressure off of the main arteries like N.C. Highway 16 going to Waxhaw. But residents at the time scoffed. “Steer traffic to someone else’s road,” they told us in town hall meetings. “Not mine.” 30

That was our mantra then: Take your problems elsewhere.

But then you showed us something. When you came along, we began to realize this: With 500 more like you born every month in just one of our medical centers and a million or so more people coming to town, we needed to change, needed to learn to live together, to be more community-minded, to think more of the future, so that we’d leave our city a better place for you, so you wouldn’t look back on us with disdain.

This article appears in the September 2013 issue of Charlotte magazine.
Categories: Feature, Longform, Real Estate, The Buzz
Contest of the Month