The Google Machine and Me

I gave up the Internet for three wonderful weeks. And now I think I want an iPhone 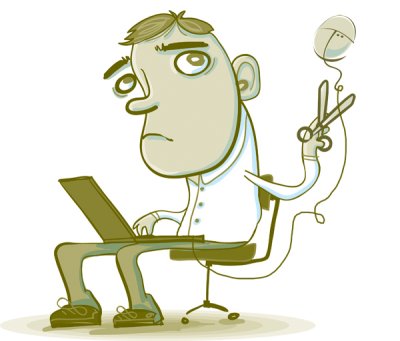 Three weeks ago I shut off part of my brain. It was a self-inflicted lobotomy, accompanied only by the fizzling sound of my computer shutting down.

I gave up the Internet for three weeks. I chewed through my electronic leash to society and disconnected from the virtual world — a society of billions of brains and egos circling the Earth looking for action. I'm surprised at how easy it's been, like being on a retreat. Instead of the Pavlovian bleating of incoming e-mails filled with distractions and unnecessary work, I have enjoyed quiet contemplation. I have reconstructed the past, reflecting with joy and happiness on growth and fulfillment and groaning upon recognitions of failures and regrets. I have pondered the future.

I have given up the Internet before, for weeks at a time, but it's usually when I'm off on a wilderness trip, in dead zones where even cellphones won't work. This time I did it with the computer (or as a friend calls it: "the Google machine") upstairs, all hooked up and pulsing with the virtual world. Before I signed off, I unsubscribed to all the organizations that ten years ago I so eagerly signed up with. I set my e-mail auto reply and explained on Facebook: Van is going offline for three weeks. My last electronic action was to send ninety high-resolution  photos to Germany. Then I logged off.

I don't hate technology. I embrace it. That I was able to send large photo files overseas so quickly is amazing. This magic Google machine can take you to places that fifteen years ago would have seemed a schizophrenic's paranoid delusion. Those cellphone images and Twitter messages after the Iranian election showed the world what was really happening. A computer enables families to stay in touch on a daily basis. It's good for seniors, keeps them alert and less isolated.

What I have missed these three weeks is information. Type in an address and get directions immediately. Is that snake with the triangular head in the backyard poisonous? Google it and find out that it is indeed a copperhead.

The Internet has been a major part of my daily ritual. A day just before my hiatus was typical, starting with morning coffee and a real newspaper with inked columns. I take a jog, then cool down while checking my e-mail. I browse around. I check my Netflix account — there are 490 movies in my queue. I have a few friend requests on Facebook. I accept them all. I Google a Photoshop question and find a solution. I look at the price of cherry wood, because a friend (an in-person friend) and I have a sawmill and we're interested in prices. I spend about forty-five minutes looking at all the beautiful wood samples. Then I look up sweet gum, those trees with the annoying spiked balls. Locals consider it a trash wood, so it's usually ground up for mulch. I have sawn some, and it is beautiful, almost like walnut. This site says sweet gum is revered in Europe, where it's used for cabinetry. I Google George Nakashima, who built beautiful natural furniture out of slabs. His work is much prized today. I make a note to find out who made Andy Rooney's walnut table he so often talks about on 60 Minutes. It looks like a Nakashima. I check my e-mail again and see that my sister has sent a long message. I save it for later. I Google auto glass, specifically a small piece to the passenger wing of my old VW convertible. Mine popped out and shattered. I sift through ten lousy sites until I find a good one. I check out the picture galleries of old Bugs and then click on a link to YouTube of an amateur video showing a renovation project of a Bug. Once on YouTube I notice a bunch of vintage German VW commercials. An hour and a half later, I leave YouTube after watching a mini documentary about Hitler and Volkswagens. I Google Andy Rooney's desk; he made it from a walnut tree that fell down on his property. Where else but the Google machine could I have verified this so quickly?

Like everyone, I conduct a lot of my business over e-mail. But it has its downsides. It's gotten me into trouble, even ruined a few relationships. When I first signed up for e-mail I used it like real mail — between two people. I sent an e-mail to one of my siblings expressing some anger and frustration about an incident. The sibling took offense and forwarded my e-mail to the rest of the family, and suddenly I was persona non grata. That caused a decade-long estrangement. A phone call would have been perfect. It could have been resolved in minutes with a lot of shouting and chest beating.

I signed up for Facebook a couple of years ago because I kept getting friend requests from some high school students I was teaching. At first I set up a page without a profile photo. I never checked it and had only three friends for a year and a half. Then I began to receive more friend requests and was asked to post a photo of myself. Last fall I was flooded with inquiries from high school classmates: Is this the Van Miller from Mira Loma High School in Sacramento? Yes it is. My high school days were wild and unfocused and not really important to me. To suddenly see all of these people I grew up with appear on the screen was like summoning spirits from a past life. It was a mixture of fascination and relief. To see people whom I shared a past with, who shared the same childhood environment, education, tap water, and local news was a relief. To see people age thirty years from the memory embedded in my mind since then was fascinating. The class make-out artist, who had fifty girlfriends, now has fifty chins and looks like a mobster. The foxy babes ('70s phrase) with their feathered Farrah Fawcett hairdos and tanned cheerleader bodies brought back memories of adolescent angst, misplaced desire, and Foghat. Today those babes look like their mothers did and I look like my father.

Some people didn't make it; motorcycles and drugs claimed a lot of lives. There is one guy I have always wondered about. The last time I saw him, I had a warm bong between my knees. I was sitting in the backseat as he drove his mother's 1970s gas pig sedan. He had the accelerator jammed to the floor. The 455 Super Rocket V8 engine roared like a WWII bomber. We were speeding down a suburban boulevard at 90 mph. Up ahead a car misjudged our speed and pulled out in front of us. I dropped to the floor, and braced for impact and a pleasant afterlife. At the last millisecond before a fatal T-bone collision, my friend — who was an incredible natural athlete, despite being anesthetized by marijuana and Schlitz — swerved the gas pig around the car, into the oncoming traffic lane, then back into the correct lane, and we sped on. At the next stoplight another friend, who was in the front passenger seat, screamed to be let out of the car. I got out too, and we walked a few miles home, our bodies surging with adrenalin and the gift of life.
I was sure the driver of the gas pig would be dead, but then I saw him on Facebook. I befriended him. It turns out he's an engineer. He has two grown kids and is developing a smoking-cessation product. Today I have 115 Facebook friends.

My life without the Internet has been simple, a lot like adjusting to a power outage. I have read a lot of books and fixed up the house. In a way I have reorganized my life. I can focus on one task at a time. It's difficult arranging business meetings and photo shoots, but people call my cellphone with updates. I've reconnected with people I have not talked with –actually talked with — in a long time. And I've had to keep myself from impulsively going to the Google machine to look for information.

Today I went back online. I had 178 e-mails, eleven Facebook notifications, and three friend requests. I heard from Michelle Obama, the Sierra Club, Joe Biden, AAA Carolina, several wineries, the president himself, and Brian Sumpter, a long-lost friend from high school. Only five of the e-mails were important. If I hadn't spent time unsubscribing before signing off I would have had 500 e-mails. I liked being away from the computer. Sitting at a desk all day long looking at a screen is no way to live. I'd rather be out getting things done and talking with people — browsing the streets. But I missed the Internet. In today's world you have to be connected. Having a cellphone helps a lot, but I think I need an iPhone. It would allow more time in the field while being connected to information and updates. I'm also going to start banking online.

I think I'm getting over my notion that digital is ephemeral. It matters. The Internet is as important to mankind as clean water and sewage lines. But it's important to know which pipe contains potable liquid and which contains crap.

Van Miller, a writer and photographer, is a longtime contributor to this magazine.

This article appears in the October 2009 issue of Charlotte magazine.
Categories: First Person, Opinion, The Buzz