After an unexpected move, Dawn O’Malley took her time collecting the perfect home

A FEW YEARS after participating in what is now the Mad About Modern home tour, Dawn O’Malley and Stephen Strzelecki received an unexpected offer on their contemporary Cotswold home. 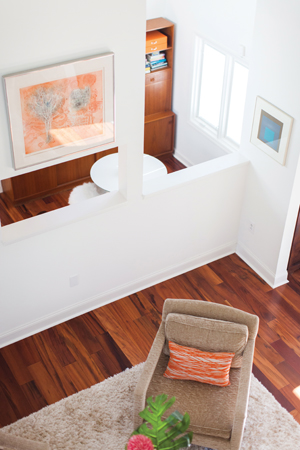 The house was not on the market, but the offer was too generous to decline, and the couple agreed to move. The results of their whirlwind search for a new home were disappointing–and their initial impression of the home in the Medearis neighborhood in south Charlotte was no exception.

“The front of the house is not its best feature,” O’Malley says.

With their closing date imminent, the couple agreed to look past the dingy cream stucco, ornate doors, and traditional brick walkway in hopes that the interior would reflect their preference for modern design.

The moment O’Malley walked in the door, she knew it was their future home.

“I had a really emotional response to the interior architecture,” she says. “I had an immediate vision of what it could be.”

Despite the odd layout of the split-level home, which has rooms spread across four levels with open hallways and cutouts in the walls to offer peek-a-boo views between levels, O’Malley had no plans to renovate the 3,400-square-foot home.

“I liked the challenge of working with what was already here,” she explains.

But there was more to turning the house into a home than unpacking a few boxes. 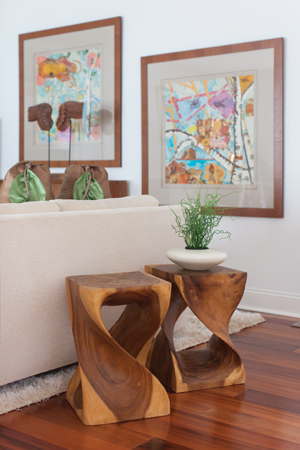 Dawn O’Malley has an extensive art collection, a result of growing up surrounded by art at her mother’s modern art gallery in Massachusetts.

O’Malley and Strzelecki sold most of the furnishings in their Cotswold home to the new owners, giving them an opportunity to find furniture and accessories that fit with their new house. Instead of rushing to fill the space, O’Malley, a psychologist who enjoys interior design, skipped the big-box stores and embarked on an epic search for one-of-a-kind finds.

She scoured consignment and secondhand stores, pop-up markets, Metrolina Expo, eBay and Craigslist, scoring great deals on items ranging from a Noguchi table and schoolhouse chairs to pop art posters. The result is a well-designed home where each piece has a unique story.
In the living room, a neutral sofa, Mitchell Gold armless chairs upholstered in microsuede, and a chrome-and-leather Wassily chair—all consignment store finds—are arranged around a marble fireplace. A pair of mixed media originals commissioned from a family friend are the only pop of color in the room, and a beanbag pear adds a touch of whimsy.

“Every room should have a sense of humor,” O’Malley says.

O’Malley points to the mid-century modern console as her favorite piece in the room, perhaps the entire house. She found the Jens Risolm teak sideboard on eBay; the seller, eager for an adventure, drove from Washington D.C. to North Carolina to deliver the piece. 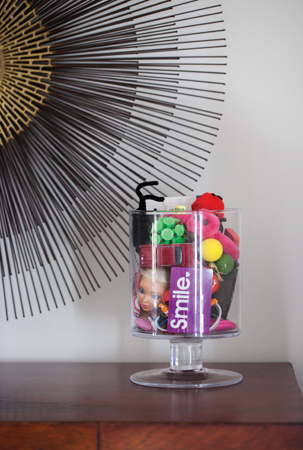 The family’s habit of picking abandoned and lost toys out of pity for the toys became a decorative piece near the front door.

The seating area adjacent to the living room was one of the hardest rooms to furnish. O’Malley found two of the four matching Milo Baughman chairs at a consignment shop and, thanks to a tireless online search, turned up a third chair on eBay. When a fourth chair proved elusive, she ordered a custom reproduction. After she had the chairs reupholstered in the same neutral fabric, the quartet matches perfectly.

Although O’Malley prefers hunting for treasures on a budget (she scored a pair of mid-century bookshelves for her home office on Craigslist for $100 and spent $19 on a signed Charlie Harper print at a consignment shop), she will happily commission a custom piece to get the look she wants.

In the dining room is a sculptured light fixture made from thousands of paper butterflies. O’Malley commissioned the chandelier, which hangs above a glass table with a Lucite base, after seeing Kathryn Godwin’s work at the Vintage Charlotte pop-up Market. It was a more affordable option than the $5,000 avian-inspired fixture she coveted.

When the sculptural chandelier is illuminated, the light casts a glow on the metallic wallpaper and Japanese kabuki artwork. 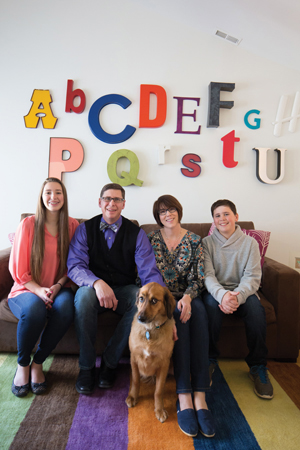 Piper, Stephen, Dawn, and Skyler sit in the media room, which is decorated with an alphabet of antique advertising letters.

It’s the geometric shelves flanking the dining room doorway that offer a true testament to O’Malley’s design determination. She spotted the shelves at the Salvation Army store on Central Avenue, where the cubbies were piled high with stuffed animals. When she inquired about the price, the manager explained that the shelves were store fixtures and not for sale. Undeterred, O’Malley returned to the store every week for several months, asking to buy the shelves.

“I kept offering increasing amounts of money,” she confesses. “One day, I found the right manager in the right mood and he agreed to sell me the shelves.”

Throughout the house, the walls are painted white to show off an extensive art collection.

“My mom owned a modern art gallery in Concord, Massachusetts, and I was surrounded by art growing up,” O’Malley says. “Most of the art [in our collection] comes from local artists, but I don’t think I’ve ever bought a piece in a gallery.”

Instead, O’Malley meets artists at pop-up markets or events hosted by NoDaRioty, an organization promoting the arts in NoDa. She also purchases pieces at Sleepy Poet Antique Mall and Slate Interiors. Searching for the right pieces is almost as thrilling as finding them, she admits. It took months (and the help of several friends) to find the letters of the alphabet that hang on the wall in the media room; each one comes from a different piece of vintage advertising and creates a whimsical collection that reflects the bold color palette in the room, which includes magenta and turquoise.

“I like to decorate for the art of it,” O’Malley explains. “I want to bring in things that are interesting to look at.”

After 18 months, the home is almost complete—the couple still wants to update the traditional kitchen with modern touches, replace the deck and add new landscaping—and O’Malley feels an immense sense of pride in how it came together.

“I love remembering where it was and my vision for how I wanted it to look, and then standing back and seeing it finished,” she says. “Now that it’s done, I have to fight the urge to buy another house and start all over again.” 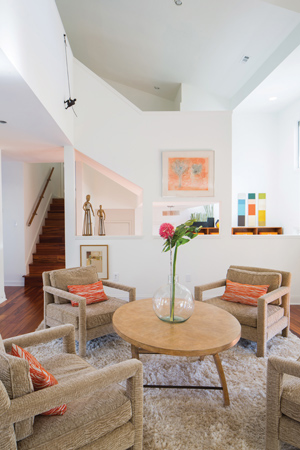 Dawn found two of the four Milo Baughman chairs at a consignment shop. After tracking down a third, she ordered a custom reproduction to complete the set, and had them all reupholstered. A climbing man hangs above them. 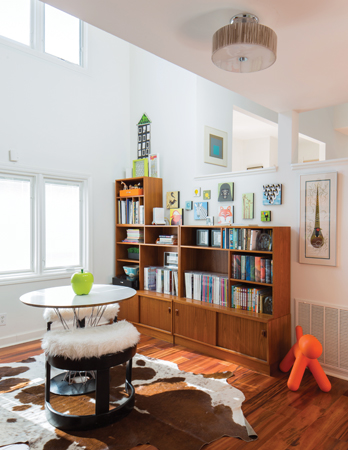 Works by local artist Scott Partridge hang on the wall. 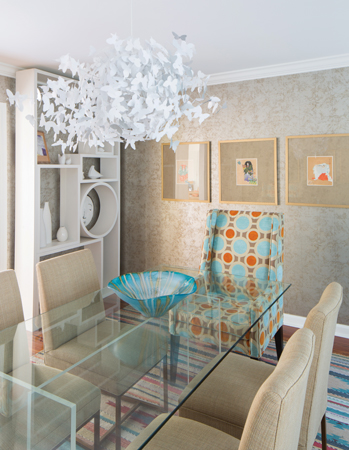 After seeing a similar light sculpture, Dawn commissioned this one of butterflies for her dining room.

This article appears in the March 2015 issue of Home + Garden.
Categories: Feature