Hair and make-up by Jayde Wills 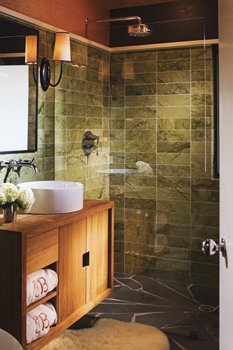 In a city slanted toward the traditional, interior designer Barrie Benson admits the allure of her midcentury modern ranch may not always resonate immediately with others. "People here aren’t used to walking into a fifties house," she says. "Before the renovations, a few close friends asked if I planned to knock the house down and rebuild," she says, laughing.

To the contrary, when Barrie and her architect husband, Matt, toured the 1956 residence while house hunting nine years ago, they reveled in its strong architectural allegiance to the modern movement of the fifties. "Many homes built in this style have either lost their integrity due to renovations or have been eaten up by developers here," says Matt, a partner at Meyer, Greeson, Paullin, Benson, a local architecture and interior design firm. "The two previous owners of this house were both architects, which is likely why the original intent of the house was still so prevalent."

Beyond its pure design, the 2,400-square-foot property in the tree-lined Foxcroft neighborhood revealed many distinctive "wow" features, such as a stacked-slate wall with a double-sided fireplace inset in the kitchen and living room; an Asian-inspired iron fretwork panel in the dining room; gutsy, geometric hardware on the entryway; and stretches of sliding glass doors that invite nature inside. "It was such an interesting, well-designed house, and it exuded a warm, cozy feeling," says Barrie, who has her own design firm, Barrie Benson Interior Design, based in Charlotte.

Because Matt and Barrie were so enamored of the existing structure, they insisted on only minor modifications to the original house and a 1,000-square-foot extension that would mesh seamlessly. To blur the distinction between old and new, many details and materials were echoed in both spaces, including the low-sloping roof, board-and-batten walls, and slate flooring. Working with Charlotte-based Advanced Renovations Inc., the seven-month job was completed the day before Kay was born.

"By the end, I was very pregnant and probably not that much fun to deal with," jokes Barrie.

The completed project allows the family of four and their Labrador, Abe, to stretch out in the newly constructed "right wing." It boasts a guest bedroom and bathroom for visiting grandparents as well as a kid-proof family room. An airy, light-filled corridor leads into the family room; one side showcases Brazilian cherry bookshelves, and the other features an expansive wall of windows, echoing the "outdoors in" theme.

The home’s rapport with nature might best be illustrated by the private 575-square-foot outdoor patio off the kitchen. "We were in California and saw all these fifties houses with fabulous contained courtyards," says Barrie. To create a similar oasis for reading and entertaining, the couple enlisted the help of landscape architect Laurie Hynes Durden.

Adjoining the "outdoor room," the kitchen gained two feet of eating space from the renovation and was updated for function. "The old sliding cabinets stuck, and I’d slam my finger in them once a day," says Barrie. A friend and colleague of Matt, Karen Paullin, who owns the Kitchen and Bath Design Center in Charlotte, devised a plan that instilled practicality (the original stove and cooktop were replaced), while maintaining a sense of the original, as demonstrated by the Wood-Mode flat-front cabinetry that replicated the old style.

For Barrie, the time had also come to turn her own craft inward. "When you’re a designer, your house is always the last you do," she says. "I always bought pieces here and there, but I was ready for my house to be finished." In need of some fresh eyes, Barrie consulted with style-setter friends such as Julia Carr Bayler, owner of the Atlanta-based vintage furniture store Belvedere. Barrie’s goal for furnishings: keep it young and interesting, while successfully merging a range of different genres. "We loved modern, but still wanted the freedom to mix in traditional family pieces, including the cherry Chippendale dining set from my parents, and travel knickknacks," says Barrie. "If we went too modern, they wouldn’t have a place and the whole look would be boring."

To make the juxtaposition work, she kept the scale of all the furnishings similar. "Typically, pieces from the fifties have smaller proportions, so I couldn’t go with big, traditional furniture," says Barrie. "I also updated fabrics. For example, I replaced the heavily textured, oatmeal Herculon fabric on the sixties swivel chairs with a fresher linen-velvet blend in orange." This change made their placement near the finer Louis XV Bergere chairs more appropriate. To stand up to the strong outdoor presence, Barrie swathed many of the walls in grass cloth, including the ones in her bedroom.

She admits that her master bedroom is still a work in progress (she’ll redo her closets and the bathroom down the road), but says it captures the "haven quality" she desired. "It’s the room we always neglect, but it feels so pampering when you finally give it attention," says Barrie, who designed the grass-green side tables. Her headboard is another perfect marriage of different styles: a traditional shape covered in a retro silk fabric.

The kids’ rooms were barely touched, but with a colorful bunk bed in Billy’s room and a modern day bed from West Elm in Kay’s girlish quarters, there’s clearly plenty of room to grow.

The design-savvy spouses consider the improved functionality, by way of more family space, as the big success of the project. But the changes have also granted increased aesthetic pride. "Given what we do, guests always expect to see a great house," says Barrie. "Before we did the work, I’d spend extra time fluffing up my flowers when guests were coming, but by 4 p.m. I’d give up and think, ‘They’re going to have to like me for my personality.’ Now I’m a lot more relaxed."