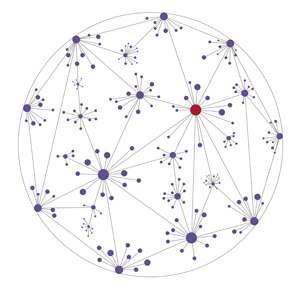 Jason McKinstry didn't set out to create a social-networking phenomenon, but when he looked out on a ballroom full of middle-aged professionals at the venerable Marriott Center City this April, it was apparent that's just what he'd done.

Last June, McKinstry created a profile on the popular social networking site LinkedIn, which is often described as "Facebook for professionals." Soon after, McKinstry launched a LinkedIn group called Charlotte Business Professionals. It took off. By the time Jason pulled the group together for its first real-time meeting at the Marriott, membership was more than 3,000, with fifty new members joining each week.

I've been on LinkedIn since fall 2007. My foray into social networking followed a pattern for people like me: we saw our kids on Facebook and MySpace, heard news stories about people behaving badly on the sites, and generally steered clear until LinkedIn hit our radar. Ah, a site for professionals without a mechanism (or audience) for sharing skanky pictures. Count us in.

I bought a book called I'm on LinkedIn, Now What?, which taught me how to harness the power of the site's interest groups and the various ways in which the site could benefit me as a solo-preneur. As a result, I joined McKinstry's group.

Inside the hotel ballroom, I was surprised by the high quality of the hors d'oeuvres and the buzz of the 125 attendees, most in corporate attire and few of whom had ever met. These people were serious about working the event, perhaps the bankers most of all.

This is the new networking in Charlotte. It's a hybrid of social media and old-fashioned meet-and-greet, and it's increasingly the best way to find a job or land business. Finding a job has always been about whom you know. But Charlotte isn't as straightforward for job seekers as it used to be. For one, there are fewer jobs. And the players have changed — entire industries are reeling, decision makers are worried about their own skin. Landing work today takes ingenuity and a better network than you've ever had before. Jim Appleby of outplacement firm Lee Hecht Harrison says 75 percent of his clients land new jobs through networking.

And it's not just job seekers who are turning to their networks to find positions; so are employers. More than one person I interviewed said that more companies are trying to avoid posting for hires — everyone will be referred or recruited. As Appleby puts it, "If you're not networking, you're not working."

In the ballroom, McKinstry, thirty-nine and a director for a technology consulting firm, took the microphone, brow glistening, and informed the group that it had just made LinkedIn history. It was the largest to start with no alumni affiliation or organizational support and then meet in person.

McKinstry reminded me of Paul Giamatti's portrayal of John Adams in the HBO miniseries by his physical appearance and his earnest drive to make a difference. He announced his ambitions for establishing the group as a model for other LinkedIn groups, starting with its own (non-LinkedIn) Web site/job board.

He struck a real John Adams note when, in a voice cracking with emotion, he announced the group's affiliation with the March Forth with Hope foundation, named in honor of cancer victim Hope Stout, whose mother, Shelby Stout, had taught McKinstry's children in school. To date, CBP has donated $1,200 to the foundation, which seeks to ease the financial strain on families battling cancer or other life-threatening diseases.

Among the people I saw that evening was Elena Pickering, whom I knew socially through our children. In lavender twin set, pearls, and skirt, she looked the Wachovia mortgage banker she used to be. Unemployed, and having just deposited her last severance check, she was there as part of her job search. Working with an outplacement firm, she was learning social networking and, she said, "keeping a positive outlook."

Other attendees included salespeople and solo-preneurs like myself looking to drum up the next deal. The recession, and its toll on Charlotte particularly, was a part of every conversation.

As a former business-development exec, I know the old networking well. We scheduled lunches and coffees, showed up at rubber-chicken luncheons, wore name tags that sometimes marred our lapels, and smiled until our cheeks cramped. Social media gives us the chance to connect on nights and weekends from the privacy of our homes and with the agility of a cell phone. That's not to say it's not hard work. It is, but it's a different kind of hard work in its 24/7 nature. Instead of reaching people one at a time, we can connect with hundreds or even thousands of people with the click of a mouse.

Scott Hepburn, an early adopter of Twitter, had a network of Twitter followers, Facebook friends, and LinkedIn connections he'd never met helping him find a job this spring. In the first few days of his search, he enjoyed a surplus of freelance offers that took him three days to sort through. He said he had enough viable business opportunities in the first week that he considered starting his own new-media consultancy. He ended up accepting a position as emerging media manager at Ritz Marketing here in Charlotte.

You might (rightly) observe that a social-media guy is in high demand and perhaps Twitter and Facebook wouldn't serve an unemployed banker quite as well. But Hepburn points out that "social media is not a silver bullet, just another weapon in the arsenal to learn to use. Send the bankers to me."

Still, as effective as social media can be, it's not for everyone. Repeated, structured, face-to-face networking is still both effective and essential. There are several structured local networking groups that were created so members could exchange sales leads. But now, members are increasingly looking for jobs themselves, or keeping an eye out on behalf of someone who is.

At an eWomen meeting, attendees get the opportunity to present themselves to at least ten others in a process that resembles speed dating. Used by predominantly small-business owners and solo-preneurs, groups like eWomen (and there are several) are designed to generate business referrals. But the formalized networking process can work for a job seeker who is willing to say, "I'm so and so, with a background in such and such, hoping to find someone who can refer me to a job."

Through my own affiliation with eWomen, I met prospects, clients, and learned of other networking groups, including one that asked me to speak at a meeting. Whenever I want to get to know a local, chances are great that someone in my network, often Miller, can make the introduction.

But I use the new-school tools, too. I've been surprised by the power of Twitter to grow my business-ghostwriting practice. Once I found the virtual watering holes of my target clientele, I tweeted an introduction to key thought leaders and received three inquiries for immediate work. However, Twitter seems to be more bogged down with spam each day, so to co-opt a financial-services disclosure, past performance may not predict future success. But I'm glad to have less rubber chicken in my diet, and I'm more networked than ever. You can be, too.

Tamela Rich is a Charlotte freelance writer and consultant.

This article appears in the July 2009 issue of Charlotte magazine.
Categories: Feature, The Buzz
Contest of the Month