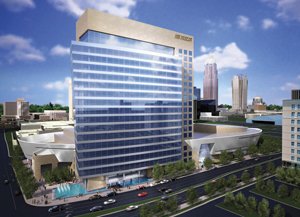 Racing comes uptown—permanently. NASCAR’s roots in the hills of Wilkes County will seem like little more than myth once this slick facility opens. "This will be an asset that folks can bring people to year round that is unlike anything else in the world," says Tim Newman, president of Charlotte Regional Visitors Authority, which will operate the hall. Designed to mimic a racetrack, the hall is expected to draw 550,000 visitors a year. It will be joined to the Convention Center by a huge new ballroom. Only a few blocks of Brevard Street separate the hall from another major civic investment, Time Warner Cable Arena, and Center City Partners envisions that stretch becoming a "stroll district" of restaurants, bars, and shops.

The hall itself will contain permanent and changing exhibits, and the plaza at its entrance at Brevard and MLK will host live television programming from NASCAR and Speed Channel. "That’ll be our Rockefeller Center Studio 1A opportunity," says Newman.
The office tower will open first, and it will house HOF offices and a few divisions of NASCAR itself, though it will not be the sport’s headquarters.

Harvey B. Gantt Center for African American Arts and Culture 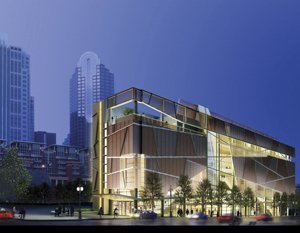 Size: 46,000 square feet
Opens: late summer 2009
Highlight: Jacob’s Ladder, the patchwork design on the sides of the structure, recalls the crisscrossing fire escapes on the Myers Street School, which used to be nearby.

The former Afro-American Cultural Center, which will be rechristened in honor of civil rights pioneer and former mayor Harvey Gantt, will be the southern gateway to the new cultural campus. It came about because of a promise Wachovia’s Bob Bertges made to Duke Energy. The new center will sit upon a sliver of land that is only fifty feet wide by four hundred feet long. It will be across Tryon from the new Wachovia Corporate Center. "When I bought that land from Duke Energy," Bertges says of the tower site, "one of things I promised was, ‘I’m not going to put a back door at your front door.’ " Duke’s Church Street headquarters building faces the backside of the future Wachovia tower, which ordinarily would be the service entrance. But Bertges and his team devised a way for service trucks to enter the tower by going underneath Tryon Street, which created the sliver of land directly atop the tunnel.
Architects The Freelon Group created an ingenious modernist design with patchwork metal, glass, and steel exterior finishes inspired by African textiles and African-American quilts. The 46,000 square feet quadruples the center’s current space and will allow it to display for the first time portions of the Hewitt Collection, a powerhouse grouping of fifty-eight pieces of African-American art. Donated by Bank of America ten years ago, the collection has spent time in storage and touring the country because the current facility is not equipped to display it. 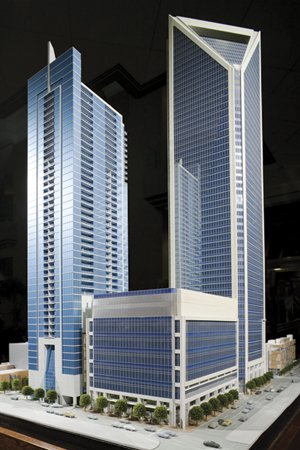 Already fully leased, the new tower, which will be Charlotte’s largest by square footage, could hold more than 6,500 employees, including Wachovia CEO Ken Thompson, if he keeps his job through the current, ahem, troubles. Duke Energy will be another major tenant, as will the Wake Forest University Babcock School of Management. This building really spurred all of the development around it, including the condo tower and the museums and theater. Some companies offer free health club memberships to attract talent; Wachovia builds stuff. "Anything we can do to help attract and retain the people who will work in this building," says corporate real estate honcho Bob Bertges, explaining part of the motivation behind the adjacent cultural campus. With lights that automatically dim, glass that refracts sunlight, and a green roof that captures and reuses rainwater and condensation, the tower will earn LEED certification.

The ground floor will contain 50,000 square feet of retail, and Bertges says Wachovia plans to fill the space with stores and restaurants new to Charlotte.

OK, so the name needs work, but when this baby fills with people, you’ll be able to notice the difference day and night on South Tryon. Wachovia’s Bob Bertges says the two-bedroom units in the tower "are not going to be entry level." Meaning, they’ll be large, with upscale finishes. The tower is still two or three years away, so not many details are available. But do look for interesting retail on the ground floor of this and the office tower. Bertges thinks Wachovia has "an opportunity for unique retail" there. Don’t bet on the same old chains. Think local restaurateurs and sexy national retailers Charlotte doesn’t already have. 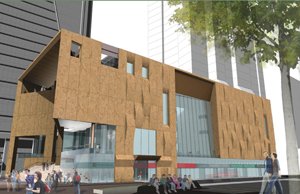 The $54 million new Mint Museum of Art and Mint Museum of Craft + Design building is the anchor of a cultural campus that Arts & Science Council chief Lee Keesler says is conservatively estimated to see 600,000 annual visitors. The original Randolph campus will continue to operate and will house the museum’s pre-Columbian, historic costume, and ceramics collections. The new facility will hold the craft and design, contemporary, and American art collections. Altogether, says Mint Executive Director Phil Kline, gallery space will grow by 70 percent. "That means we’ll be able to bring much more of the collection out and put it on view. It will give us many more opportunities to engage the visitor," Kline says. It also means the city’s main art museum will finally be able to host blockbuster traveling exhibits it hasn’t been able to accommodate in the past. And look for a special gallery devoted mainly to native son and twentieth-century icon Romare Bearden’s work, plus a full-service cafe and a street-front store.

The building itself will contain several event spaces, including a rooftop terrace. A sixty-foot-tall window will let people see in and out of the Grand Room, which will serve as a lobby and gathering space. And there are plenty more windows throughout. "If you’re standing in one part of the building, you’ll be able to see into another part," Kline says. "I think it really will help connect it to the rest of the cultural campus and everything that’s going on in that part of town." 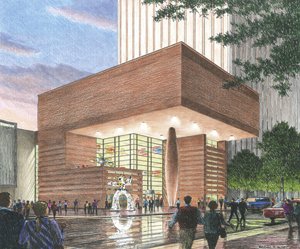 Size: 35,000 square feet
Opens: late 2009
Highlight: Niki de Saint Phalle’s Firebird, an eighteen-foot-tall sculpture, made of 7,000 pieces of mirrored glass, will adorn the front plaza. Museum President John Boyer describes it as "a wonderfully expressive piece by an artist at her full power."

Of all the new cultural facilities, this is the one most likely to draw visitors from around the world. That’s for two reasons. One: architect Mario Botta. The Swiss Botta has an international rep and has only designed one other building in the United States—the San Francisco Museum of Modern Art. The guy is good, and architectural tourism is big business. If you visit the site now (best view is from The Green across the street), you can see its bones in the form of gray concrete and rust-colored steel beams. The top floor will hang dramatically over a plaza, seemingly held up only by a thick post that tapers to a point at the top (the post is not installed yet).

Inside, three floors of gallery space will display a rotating selection of Andreas Bechtler and his family’s stunning 1,200-plus-piece collection of European modern art. "You can look at a lot of great museums across the country, and very few have the richness and the depth of the Bechtler’s holdings when it comes to twentieth-century European modernism," says John Boyer, the museum’s president. "It’s going to put Charlotte in a dramatically new light from the museum world’s perspective."

The collection stands out for another reason. Talents like Bracque, Miró, Degas, and Picasso were friends of the family, and the Bechtlers collected not only paintings, prints, and sculpture, but letters, drawings, photographs, and sketchbooks—items that will lend the museum a personal touch. 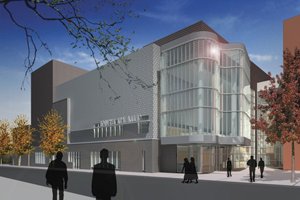 The idea for the cultural campus began to form when Foundation for the Carolinas head Michael Marsicano called Wachovia CEO Ken Thompson to suggest that a new theater be built on a different bank-owned uptown site. "That’s an interesting idea," Thompson said. "Why don’t you give Bob Bertges a call?" He did, and Bertges got to thinking. Then he started making some phone calls of his own. Before long, he and others had recruited the Bechtler and the Mint to a new arts complex. The Knight Theater will be adjacent to the Bechtler and will serve as home base for the North Carolina Dance Theatre, as well as host Charlotte Symphony concerts and various other events. It’s named for $5 million donors the John S. and James L. Knight Foundation. When he was publisher of The Charlotte Observer, the late John Knight worked in an office that was across the street from the new theater.

The office component of a block-long development that includes a condo tower (Catalyst) and a hotel (TWELVE), this mini-tower features a concave glass front and will help reanimate moribund South Church Street. It’s a joint project of Trinity Capital Advisors and Novare Group.

Novare Group, which also built Avenue in Fourth Ward, announced this project once it appeared likely that the baseball stadium andpark would actually happen. The twenty-seven floors will eventually hold 462 condo units, with modern high-tech touches like Wi-Fi and iPod docking stations. The tower boasts the now-standard amenities like a 24/7 concierge, outdoor living room, and private terraces. And here’s something cool: in Romare Bearden Park, the residents will have their very own five-and-a-half acre yard, courtesy of the county and Novare Group, which is ponying up $1 million. 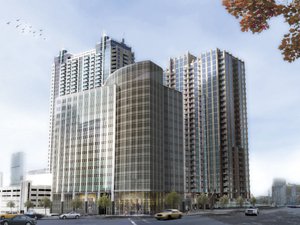 The hotel suites, which are 680 to 700 square feet and contain full kitchens and living areas, are on the bottom, the condo units, with modern interiors and private terraces, are on the top. Altogether, it’s a development unlike any other in Charlotte, but one that’s already been successful in Atlanta—twice. Novare Group is behind this one, too. It completes the master-planned full block between South Church and Mint streets, south of Martin Luther King Junior Boulevard.

Size: 5.5 acres
Opens: 2010
Highlight: The park is named for and inspired by iconic twentieth-century painter and collage artist Romare Bearden, who grew up near the site in the Brooklyn neighborhood, which was razed in the 1960s in a fit of urban renewal.

"There’s the old cliché from the nineteenth century," says urban planner and UNCC professor David Walters, "Frederick Law Olmstead used it and many others as well—he said, ‘Parks are the lungs of the city.’ " Meaning, they give it life. Finally, uptown Charlotte will have a true urban park. This beauty will be connected to Tryon Street by a block-long green promenade and will serve as the front entrance to the baseball stadium. Design details are still being worked out, but expect loads of public art, open green space, innovative landscaping, and a café. "We also refer to [parks] as the green living rooms of the city," Walters says. "They’re where the city entertains itself." 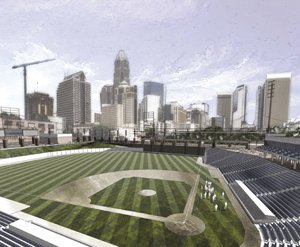 There are still one or two details to be ironed out, but it looks like CCCP President Michael Smith’s whopper of a land swap idea, which also involved Romare Bearden Park, several corporations, Charlotte-Mecklenburg Schools, Donald Trump (kidding), and the guy in the cubicle next to you (still kidding—probably), will actually fly. Once it soars, ground will break on a brand-new minor-league baseball stadium between the new park and Bank of America Stadium. Home plate will be at Mint Street and Martin Luther King Jr. Boulevard. Smith thinks the ballpark will spur plenty of new development on the surface parking lots that surround the site. The area is especially ripe for apartments, he says. "Think Wrigleyville," he says, evoking Chicago.

This article appears in the June 2008 issue of Charlotte magazine.