The Origins of Passion

What do an Ebola survivor, a tuba player, and an aging runner have in common? A reason for doing what they do

Once a week, I drive by the PNC Music Pavilion on my way to eat lunch with a friend. I always see the same old man, hunched over, wearing too-short shorts, a tank top, and a headband, trudging along Pavilion Boulevard. He walks like he has a refrigerator on his back, and he has arms and a chest that make me think he could pull tree stumps out of the ground with his bare hands.

Sometimes he’s walking as I pass him. But most days he’s running, and I mean RUNNING, huffing it, as though he’s trying to give himself a heart attack. I slow down and look back out of my rearview mirror. He grimaces with every step. He never smiles. Running Man looks so pained that I mention him to my lunch friend, who says, “I’ve seen him running around here for years, and I’ve always wanted to know what’s going on with him.”

Soon, I find myself trying to time my arrival so that I’ll see Running Man. He becomes a metronome for me, his devotion a constant against which I measure myself. If he runs like that every day, surely I can survive my next deadline. They (almost) never hurt. I can’t stop thinking about Running Man, and how miserable he looks. Where does a man get that kind of drive to keep going despite all that pain and frustration?

So I stop and ask him.

MY JOB IS TO CHASE OTHER PEOPLE’S PASSIONS. My favorite question is, “Why do you do that?” I can’t count how many times I’ve said to an interview subject, “You know that’s not normal, right?”

Watching Running Man run makes me wonder about the origins of passions, his and others’, how and why we get them and keep them. It also makes me wonder how a place shapes passions in its people, and how a city such as Charlotte can develop an image as either enthusiastic or indifferent.

In the August issue of this magazine, Executive Editor Michael Graff had a line about this city: “You’re too passive, Charlotte, oh Queen City of khaki pants and button-down shirts,” he wrote, probably while wearing khaki pants and a button-down shirt. Graff pays me, and the things he writes have in every other case been brilliant, so it’s probably wrong of me to say he’s full of it.

But he’s full of it.

Charlotte may not be identified with screaming, face-painted fans at football games, or fiery, historic events from the past, like other cities. But this city reveals its passion in other ways, in a collective excitement about where we’re going, from a sleepy Southern town to a thriving banking center to whatever’s next.

I start to look for other people like Running Man in Charlotte, everyday people who are pushing themselves, and by extension our city, to be better by tomorrow. I find them everywhere.

“THERE'S SORT OF A FAMOUS saying in the tuba world,” says Aubrey Foard, the principal tubist in the Charlotte Symphony Orchestra, “that you have a better chance of becoming governor of a state than you do [of becoming a principal tubist] in a full-time symphony orchestra in the United States.”

The funny little thing about this funny little saying is that it’s true—there are more states than full-time symphony orchestras. Even knowing those odds, Foard, the son of two musicians, pursues life as a full-time tubist.

In December 2011, Foard traveled to Washington, D.C., for an audition for the United States Marine Band. He took a red-eye flight from San Diego to get there, and he was late to the audition. He had prepared, but not as much as he should have, and it didn’t go well. He didn’t get the job and vowed not to let that happen again. “I can’t take an audition anymore unless I’m going to be so far ahead of everybody else that the people on the committee have no choice but to give me the job,” he says.

Five months later, in April 2012, he had another audition, this time in Charlotte for the principal tubist’s job. To prepare, he crafted a training regimen, based on ideas from Mark Inouye, trumpeter for the San Francisco Symphony. Starting eight weeks before the audition, Foard played roughly half the music required for the audition every morning and recorded his work. (He played different parts each day to make sure he learned all of it.) Then he listened to the recording and took notes on where he needed to improve. For his afternoon practice, he worked on those parts.

Two weeks before the audition, he started visualizing the day. He imagined arriving, meeting the judges, and playing for them. In his mind’s ear, he nailed every note and then heard the personnel manager announce Aubrey Foard as the winner of the job.

And after Foard made all that come true, the real work started. Now he practices up to three hours per day, in addition to flying to and from California every week, where he teaches tuba and euphonium at UCLA. Foard pushes himself to perfect his craft because of another visualization: audience members waiting for the show to start, waiting to be transported out of their seats and to something better.

“Music is really the way to improve people’s lives. People show up to the orchestra, and they’ve got this, that and the other thing going on in their lives,” Foard says. “When you’re sitting there in that concert hall and the orchestra is really playing its best, playing a piece of music that’s very affecting, you lean back feeling like you are absolved, for lack of a better word, of all the problems in your life, at least for a short period of time.” 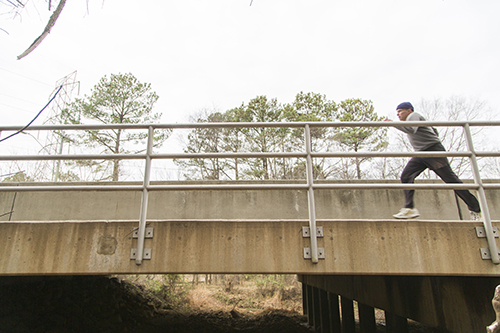 “It’s not in my nature to take it easy,” Jeff Keats says.

I STEAL FROM PEOPLE I INTERVIEW—thoughts, ideas, points of view. I often wish I could steal their passion, too. But passion can’t be stolen, and its origins are sometimes mysterious. Often the answer to my question, “Why do you do that?” is, “Because I do it.”

Still, when I dig deeper, I find reasons. Passion can spring from a desire to succeed or a desire to avoid failure, or from a need to serve others, or a mission to achieve greatness. Sometimes passion comes because of pain—the word itself derives from the Greek word for suffering—or, more to the point, to avoid pain or help others avoid it.

And sometimes passion comes because of a higher calling.

Nancy Writebol grew up in a Christian home, and she has fond memories of conversations around the dinner table with missionaries who visited her family. She and her husband, David, moved to Charlotte in 1993 and began working in international ministry more than 15 years ago.

They became famous last year when Nancy contracted the Ebola virus in Liberia. She nearly died before recovering in Emory University Hospital in Atlanta. Now that she’s back in Charlotte, the Writebols are trying to figure out what to do with the rest of their lives.

They have a few ideas, nothing concrete. But if God calls them back to Liberia, they’ll go. Wouldn’t it be easier to screen His calls? Or talk Him into something else?

“No matter what we do, we just want it to be done for the glory of God,” Nancy Writebol says. “Above all things, that’s the most important thing of our lives. That’s the passion of our lives, for His glory.”

To squelch that passion out of fear—to let somebody else go do the work she and David believe God called them to do—would be not only disobedient, they say, it would also be missing the chance to achieve a greater good from her ordeal. “Suffering” and “glory” appear together in 11 different Bible verses. Maybe, they say, their suffering and God’s plan are intertwined in ways they won’t understand until they’re in heaven. Maybe, Nancy says, she contracted Ebola to draw attention to it, so that a cure could be found, so that others won’t have to endure what she did.

She grabs a book titled Risk is Right and reads from the foreword, which is written by David Platt, the president of the Southern Baptist Convention’s International Mission Board: “In view of God’s great glory above us and in the light of the world’s great need around us, retreat is unquestionably wrong. For the good of our souls and for the glory of our Savior, risk is most assuredly right.”

I start to tell her that I hope whatever risk she and David take next doesn’t make them suffer as much as Ebola did, but then I stop. I wonder: If it’s not hard, will it be worthwhile?

Nobody’s passionate about anything that’s easy.

The Writebols’ struggle with and triumph over Ebola revealed their passion, just as overcoming steep odds and a failed audition revealed Foard’s.

I PARK MY CAR in a PNC Music Pavilion entrance and wait for Running Man to reach me. He’s short and thick, with thinning hair and eyes that stay up late reading. He tells me his name is Jeff Keats and that he might be a distant relative of the poet John Keats, according to an old family story. The poet John Keats once wrote, “Do you not see how necessary a world of pains and troubles is to school an intelligence and make it a soul?”

The runner Jeff Keats tells me he’s 70, that he runs instead of jogs because it’s better exercise and because he sprinted competitively as a young man. He ran track in high school and college and on club teams in New York City.

For his daily runs, he leaves his house at 11:15 a.m., with his house key hanging around his neck and tucked under his shirt. Until two years ago, he ran his entire 3.62-mile route twice a day. But as a concession to his age, he started walking parts of it. I ask him why, at 70, he doesn’t just take it easy. “It’s not in my nature to take it easy,” Keats says. “If I took it easy in Vietnam, I wouldn’t be here.”

He says one day in Vietnam, he and three Army buddies were in a foxhole. It was time to eat, so Keats left to get rations. When he returned, the hole was twice as big as it used to be, and his friends were gone.

He says he was wounded twice and nearly buried alive. Dirt covered him to his nose, and another soldier discovered him only because sunlight twinkled off his watch. He came home a changed man. “The first time I got back and I looked in my drawer and I saw my running spikes, I thought to myself, ‘What an impossibility to get into these things and actually use them after what I’ve been through for four years,’ ” he says. “It didn’t seem possible.”

So he left the spikes in his dresser. But he soon became curious whether he could still run. One day he slipped his feet back into those spikes. He had changed, but they had not. They still fit. And he could still run, so he has kept doing so, ever since.

Matt Crossman lives in Charlotte with his wife and two daughters. Email him at mcrossman98@gmail.com, or reach him Twitter: @MattCrossman_.

This article appears in the February 2015 issue of Charlotte magazine.
Categories: By Matt Crossman, Opinion, The Buzz
Contest of the Month