Rather than fill her urban-style loft with hipster-chic décor, former Barneys New York buyer Ruth Caldwell designed a space that meshes her most personal objets d’art with worldly collectibles 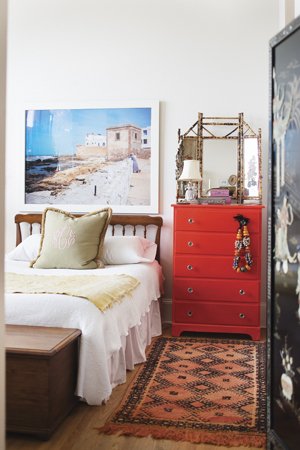 A blown-up print of Caldwell’s shot of the picturesque Moroccan port city Essaouira serves as a focal point in the bedroom. The floor covering continues the Moroccan theme.

Stepping inside Ruth Caldwell’s six-year-young studio loft apartment, you’d expect to find modern, minimalist décor, reminiscent of a NoDa art gallery. But Caldwell, buyer for the upscale women’s boutique Capitol, veers away from the predictable. She doesn’t feel compelled, as others might, to create an urban hipster image in the bright-white loft. Instead, this young rule breaker views her 770-square-foot domain in SouthPark as a canvas for personal expression. "I’m passionate about so many things, and I want the style of my home to represent all those sides of me," says the native Charlottean.

It was a seven-year-stretch of working and living in New York City after college—her first time really being outside of the South—that emboldened Caldwell’s fearless sense of individuality. After a brief financial career on Wall Street (where she dared to wear pink Ferragamo loafers among all the conservative suits), Caldwell, twenty-nine, landed a position in the buying office of one of Manhattan’s most venerable fashion emporiums: Barneys New York. "You’d imagine that ‘fashion people’ would all look like they just walked off the runway, but at Barneys everyone had their own specific personal style," she says.

Surrounded by creative types and living in colorful Greenwich Village, Caldwell’s spirit of discovery was unleashed. She became intrigued by famed interior designer Kelly Wearstler, who was gaining notoriety for her modern take on old-Hollywood glamour. For Caldwell, the opulent style was a huge departure from the simple, relaxed shabby-chic look she coveted during her college days. "I admired the incredible way Kelly Wearstler mixed found materials and used elements of drama and exoticism," says Caldwell, who on a more modest scale than her muse commingles similar themes in her own living space. For example, in Caldwell’s sleeping area, a bold high-gloss red dresser faces an unadorned, earthy wooden hope chest and an area rug from a recent two-week journey to Morocco.

Caldwell’s wanderlust has an undeniable presence in her home. You happen upon many ethnic influences in her apartment, such as a large black screen with a Japanese geisha scene from Fifteen Ten Antiques and a settee circa late 1800s from her mom, which was reupholstered in an Asian warrior motif. Beyond the Moroccan rugs, there are numerous decorative mementos from Caldwell’s trip to the north African country. ("The first of hopefully many trips to far-flung destinations," she says.)

She eagerly tells the stories behind each of the treasures she returned home with. The design on the brass tray, which now rests on her nightstand, was etched freehand by a man at a market in Fez. Hanging next to her front door is a Hand of Fatima ornament; "it’s viewed by many in Morocco as a talisman of protection," explains Caldwell, who insists that the objects she displays carry meaning rather than just collect dust. To guard against an overload of cultural infusion, she says, "I make sure to mix in glamour and elegance, whether it’s my silver candlesticks or Limoges box collection, so it doesn’t start looking like ‘It’s a Small World.’ "

After all her years away from Charlotte, Caldwell’s apartment still hints at her traditional Southern roots; two obvious reflections are her elegant antique silver bathroom vanity set and the oversize monogrammed pillow on her bed. Caldwell’s place also has a faint theme of pink—a favorite color. She painted the inside of her walk-in closet in the rosy hue, and the grande dame of Caldwell’s living room is a seven-foot pink paisley couch. Purchased in a Manhattan antiques store, the sofa has found a place in four of her previous apartments.

It may be natural to wonder how Caldwell manages to work this distinctive piece into so many different domiciles. But the bigger question is how she makes all of her divergent tastes blend so seamlessly. Interestingly, she rarely buys pieces to go with other items in her home—and the same goes with her wardrobe. She buys things she absolutely adores independently, and then figures out how to mix them in. It may help that she enjoys unexpected combinations. Consider her home workspace, which includes an old white wicker table coated in gray paint paired with a contemporary Philippe Starck clear Louis Ghost Chair. Once Caldwell chooses something, she never second-guesses her pick—and therein lies her secret to pulling together her look. "I know very passionately what I like, and that’s the consistency that makes everything match."

Formerly an editor at Marie Claire, Nancy Rones writes for Redbook, Parents, and Self.