PEARL FRYAR LOUNGES in the driver’s side seat of a shiny John Deere Gator. The animated 75-year-old is talking—no, preaching—to guests who have entered his fanciful world of cut trees and shrubs. His hands are large and ashy and rough.

Fryar moved to Bishopville, South Carolina, in 1976 for a job transfer with a can-making plant. He’d grown up in Clinton, North Carolina, a small town just east of Fayetteville, and he attended college at North Carolina Central before finding work in New York. When the company he worked for built a new plant in Bishopville, the owners asked him to move and help open it. “I thought, ‘Well, there’s not much there,’ ” Fryar remembers. He would soon help change that. 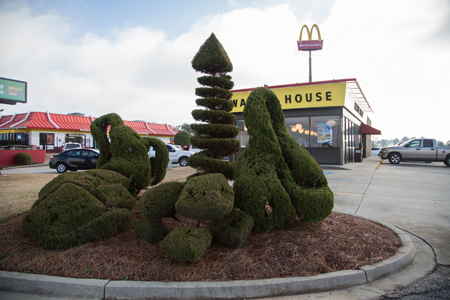 Pearl Fryar and his wife, Metra, eat for free at the Waffle House in Bishopville every morning because Pearl maintains that topiary in front.

A little less than two hours southeast of Charlotte, Bishopville is a town of 3,500 people that was mostly known for being one of the largest cotton producing areas in the Carolinas. Driving into downtown now, you’ll see topiary shrubs lining the median, a few old shop fronts, a refurbished opera house, and the South Carolina Cotton Museum. In 1980, Fryar’s land was a cornfield. After the crop was harvested in the fall, he had his home built. A year later, he went to work on the landscape.

“I really wanted ‘Yard of the Month,’” Fryar says. He started with a load of discarded plants from nearby City Nursery Farm, and his love for trimming and maintaining trees grew from there. He’s never had formal training in landscaping.

Today, a garden pamphlet outlines nine stops around the three acres, detailing highlights such as the “Fishbone Tree,” a fishbone-shaped Leyland cypress planted just after Hurricane Hugo came through in 1989. It took seven years for Fryar to snip and guide the tree into what it is today. Trees in dozens of other shapes—short and stumpy, a “birdhouse tree,” mushroom shapes, squares, some arched, some spindly—pack the yard. Each brings its own whimsy. Fryar estimates there are about 400 plants in his garden. 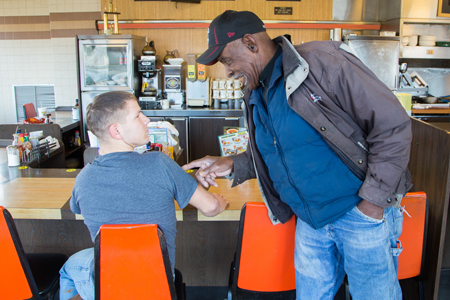 Fryar gives a young man relationship advice on his way out.

The plants are complemented by what Fryar calls “junk art”—pieces of scrap metal and other goods he fished out of recycling bins and junkyards and used to create sculptures. “We spend too much time complaining about what we don’t have and never use what we do have,” Fryar says.

On a fall day, Eric Davidson and his family are here from Ontario, Canada, to see the garden. “We saw the movie on this place a couple of years ago and have wanted to come ever since,” Davidson says. “It was on my bucket list.” He’s talking about a 2006 documentary A Man Named Pearl, which introduced Fryar and his garden to a national audience.

The garden’s beauty gets plenty of attention, but recently, the focus is on its mission. Fryar was an ordinary student, he says, but he’s used his skills to inspire thousands of visitors from around the world. And about a decade ago, he started a scholarship fund to show students that they, too, can use their talents to make a contribution.

“We are losing too many students from the bottom,” he says, “because we educate from the top down.” Some of the donations and sales from garden calendars go toward the scholarship fund, which provides two students from Lee County, South Carolina, tuition for either a community college or a technical school.

“Everyone is not gifted academically, but everyone has a talent. Everyone has a gift,” Fryar says. “Cuttin’ up bushes has been pretty good for me.”

Virginia Brown is a writer based in Charlotte. Email her at va.r.brown@gmail.com, or reach her on Twitter: @virginiarbrown.

What’s along the way?
Stop for the locals’ favorite barbecue at Watford’s, located on South Main Street in Bishopville. It’s a no-frills restaurant that serves pulled pork, chicken, and ribs, plus a signature tangy sauce, hash and rice, and sweet potato soufflé. 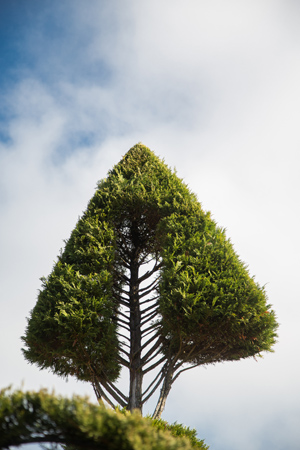 One of Fryar’s most famous pieces is Fryar’s Fishbone tree, crafted from a Leyland cypress. 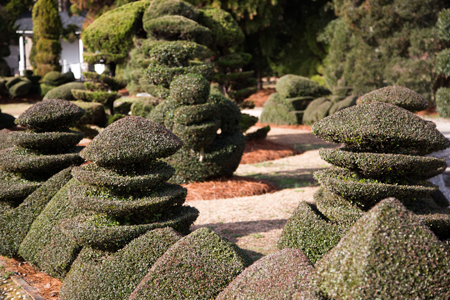 Trees in dozens of other shapes—short and stumpy, a “birdhouse tree,” mushroom shapes, squares, some arched, some spindly—pack the yard. 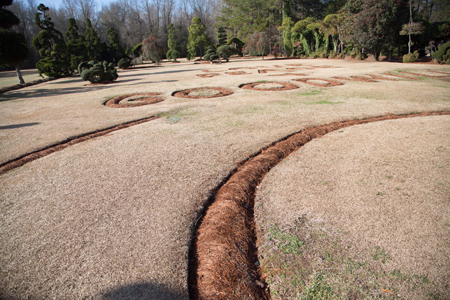 In 1980, Fryar’s land was a cornfield. After the crop was harvested in the fall, he had his home built. A year later, he went to work on the landscape. 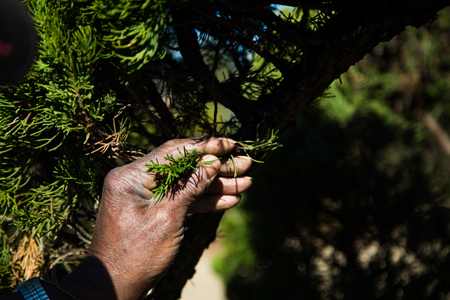 Fryar started with a load of discarded plants from nearby City Nursery Farm, and his love for trimming and maintaining trees grew from there. 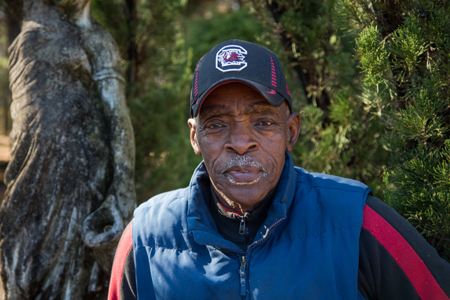 Not long after Pearl Fryar moved to Bishopville in 1976, he bought a house and immediately set out to win the “Yard of the Month” award. He wound up doing something much bigger with his gardening skills.

This article appears in the March 2015 issue of Charlotte magazine.
Categories: Feature, The Buzz, Travel
Contest of the Month