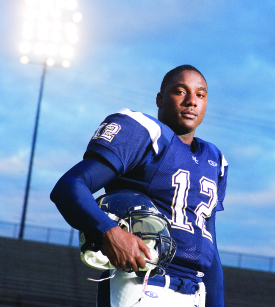 To Marquise Williams, August 2007 seems like a long time ago. He was a ninth-grader and one of 1,200 students to attend the newly opened Mallard Creek High School. He was the starting quarterback, and he was nervous and excited.

His team won only one game that season.

“Everybody’s first year is going to be hard,” says Williams, who has started at quarterback all four seasons. “We just had to grind it out—work more, hit the weights more. A lot of people respect us now and we’ve made a name for ourselves.”

The Mavericks made a run at the state championship last season, finishing 11-2 after losing to Independence in the playoffs. They now steamroll over opponents, sometimes by forty or fifty points. Williams leads the charge. The six-foot-four-inch, 220-pound quarterback can easily be mistaken for a tight end or defensive lineman. It’s hard to imagine that defenders want to see him running toward them. But that’s what he often does.

“I’ve been known mostly as a running quarterback, but I can gun the ball,” Williams says. “I have a strong arm. But I’m trying to do whatever I can to help us win the state championship—running or throwing the ball.”

Although he has committed to play football at the University of North Carolina, Williams says winning a state championship is his focus right now. As a member of the first graduating class to have started at Mallard Creek as freshmen, he wants to add to his group’s legacy. And school spirit is at an all-time high.

“Friday night is the greatest thing ever,” Williams says. “You can feel the students’ section vibe and the lights. When the lights come on, that means it’s time for action. That’s why it’s called Friday Night Lights.” —J. H.

In three of your first five games this season, your team clobbered its opponents 61-0, 74-0, and 58-0. Those are some staggering numbers.
Our offensive line is incredible. I haven’t been touched much. We’re running the ball pretty good and throwing. I think I have more weapons around me this year than I’ve had all four years at Mallard Creek. We have so many weapons—you don’t know what we’re going to do.

What do your coaches have you work on in practice that you think has been instrumental to your success?
They emphasize hard work. They have me working a lot on my footwork—thirty minutes before practice and thirty minutes after. You know, because that’s going to be a big factor on the next level.

Speaking of the next level, you committed to UNC over the summer, but that was before the NCAA’s investigation into the school’s football program. Has that affected your decision?
Right now, I’m still a Tar Heel. I’m just visiting [other] schools in case something goes down and they go on probation. If they go on probation, I’ll have something to fall back on. But as of right now, I’m going to be a Tar Heel until anything changes.

What made you choose North Carolina over Virginia Tech, Michigan, and LSU, all of which traditionally have had more success in football?
What made me choose Carolina is [Coach] Butch Davis. He talked to my dad, gave us a great talk. I felt that vibe, like, he’s a winning coach. He’ll do anything to win, and I love coaches like that—who’ll put their best players out there to win a football game.

Often, high school quarterbacks with your athletic abilities are moved to other positions in college. Do you think that will happen with you?
I expect to play quarterback in college because I can throw the ball. I think I can throw better than I run.

What pro quarterbacks do you admire?
I love Vince Young; I think he’s a great quarterback. Some people don’t think so because [of his style of play], but I look up to Vince Young. And I’m a big fan of Matt Ryan. I love how he’s so poised in the pocket and delivers the football.