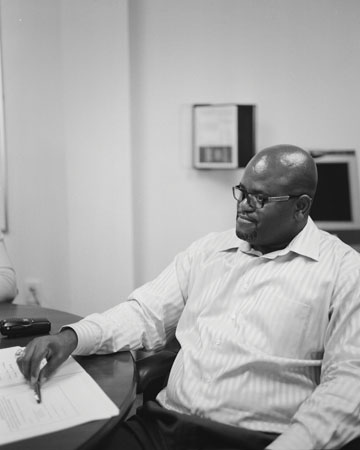 "Beep, beep, beep.” Shelton Jefferies resists the snooze and slips out of the sheets. It’s 5 a.m. He’ll have one hour to himself before a houseful wakes for this mid-May school morning.

A speedy shower revives him, and Jefferies, forty, heads—as softly as his six-foot-one, football-player-like build will allow—downstairs to his home office. He plops down in his desk chair, careful not to wrinkle his black trousers and pristine button-down, and peers through a pair of black-rimmed glasses at a seemingly endless set of fresh emails. Today, like every day, he’ll try to beat the clock. The emails will keep coming, and when he relocates in about an hour to his office at West Charlotte High School, Jefferies will be reminded that his job is never done.

He hears footsteps upstairs and the hum of four voices, which means the family is up. He wraps up what he can and meets them in the kitchen, where they’re huddled around an oak table eating English muffins and cereal. There’s his son, Shelton Jr., a newly minted teen and eighth-grader at Piedmont Middle; his daughter, Trinity, a spunky eight-year-old and second-grader at Elizabeth Traditional; his wife, Natasha, a recruiter in Charlotte-Mecklenburg Schools’ Human Resources department; and his little sister, Dominique, an eighteen-year-old senior at West Charlotte, whom he took under his care after their mother died six years ago. His other sister, Chakayla, a junior at Wake Forest University, is home for the summer and still sleeping.

Jefferies, forty, asks his son how he’s feeling about the End of Grade tests (EOGs), which started last week for third- through eighth-graders. “Concentrate, take your time, and read the questions carefully,” he encourages him. “Just do your best.”

In two weeks, Jefferies will oversee the administration of the high school version of the EOGs—the End of Course tests (EOCs)—at West Charlotte. He’s been working with teachers and reporting to his area superintendent the entire year in the effort to prepare his student body as well as he has his own children and sister.

Dominique listens in on the tips, as Jefferies reminds her of the tests’ importance.

In his second year as principal, he feels the pressure, too. His school’s scores will show how well Jefferies has trained and prepared his faculty to teach EOC material. He has observed and evaluated his teachers, providing weekly feedback on the quality of their lessons and how well they engage students. West Charlotte data predicts that only 1,052 West Charlotte students will pass second-semester EOCs, but 1,787 need to pass to meet CMS’s goal. That would make for a 77.6 percent pass rate, up from 72.4 percent in 2009-2010.

Jefferies understands the demands that performance goals place on his teachers; he taught third grade at Eastover Elementary in the early days of his fourteen-year CMS tenure. But he maintains that student achievement must be the top priority. “If all of the adults in a schoolhouse are worried about themselves, who’s worried about the kids?” he insists.

It’s 6:30 and time to leave for school, but Jefferies dashes into the den to catch a second of SportsCenter. He hails from New Jersey, but the New York Knicks are his team.

He hugs and kisses Natasha and Trinity goodbye, and he, Dominique, and Shelton Jr. pile into his black Ford Explorer. Once they drop off Shelton Jr. at Piedmont, Jefferies and Dominique revert to a standing conversation about graduation and her summer plans. She’ll be attending North Carolina Agricultural and Technical State University in the fall.

They scoot up to school right at 7 and part ways. “Dom” is one of Jefferies’s students again.

“Good morning, Principal Jefferies!” pockets of students shout as they cruise by. He receives them with a wide smile that stretches under the skinny, sable mustache framing his mouth. The front of campus is abuzz because West Charlotte is hosting a few VIPs, including Superintendent Peter Gorman, this morning.

By 7:30, Jefferies is in his office, pulling together data for a 10:45 meeting with Title I Services. Based on its aggregate poverty, West Charlotte is entering Title I status next year, and it’ll have to go through a comprehensive needs assessment to determine how the new funds will be allocated. Jefferies is careful to keep his door shut because it’s a proverbial floodgate for students, parents, and staff, even when cracked. But he can’t shut out the phone calls. Between rings, Jefferies sifts through self-assessments of how West Charlotte uses its time and staffing until he takes his meeting.

At 11:45, he meets the first of the two visitors for a tour of campus. They stroll the school grounds, which are sprinkled with soaring, shady trees and sidewalks that trail under metal overpasses, leading to one large brick building after another. This is the home of the Lions; the spray-painted paw prints that adorn the walkways and the glistening sports trophies that pack the hallway cases make that clear.

They pop into upper-level math and science for impromptu observations and chat with Teach for America corps members. Jefferies returns one visitor to the top of campus and takes the other to International Baccalaureate Spanish, Algebra I, and English I. 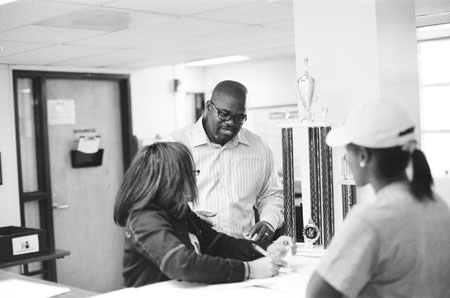 Principal Shelton Jefferies, forty, has been tasked with turning around West Charlotte, which was one of the lowest-performing high schools in CMS last year. He has been working closely with his faculty as well as his administrative bosses on lesson plans designed to help its students do well on the EOCs. West Charlotte data predicted that 1,052 WCHS students would pass. The goal: 1,787.

One p.m. teases Jefferies with a break, but it’s interrupted by a walk-in meeting with two Booster Club parents who have spotted his open office door. They’re eager to plan next fall’s athletic banquet, and Jefferies can offer them thirty minutes.

At 1:30, he rallies his administrative staff, on the fly, to prepare for 2:15 dismissal. They crowd around the front office mulling the day’s events, the schedule for the impending EOCs, and plans for the Freshmen-in-Transition program. In the afternoon announcements, they’ll include the news that EOCs begin two weeks from today, on June 1.

At the sound of the bell, the students storm the halls like fans onto a championship football field, and with a 3 p.m. meeting on his calendar, Jefferies’s exit is equally swift. He makes a pit stop at home to drop off Dominique and finds a turkey wrap in the fridge. It will have to suffice as both lunch and dinner. Jefferies has two more meetings to go.

When he arrives at the high school principals meeting, Jefferies is met by familiar faces, including the principals from West Mecklenburg High and Phillip O. Berry Academy of Technology, peers Jefferies knows he’ll be evaluated against when the EOCs are scored in a couple weeks. On today’s two-hour agenda are ways to address student needs and to improve student test scores through effective instruction.

When released, Jefferies inches through traffic to a 6 p.m. Bank of America Stadium training on how to host a vending station at Carolina Panthers games; it’ll raise funds for West Charlotte’s student government, band, and athletics.

Jefferies eases the Explorer into the garage at 8:45 and steps into a serene house. He’s missed family dinner—though the aroma still lingers—and now everyone’s in wind-down mode. That works for Jefferies; he’s wiped out. Natasha’s getting the kids ready for bed, and Dominique and Chakayla are downstairs in the bedroom they’re sharing for the summer. Jefferies hurries upstairs and assumes his role in the kids’ bedtime routine without missing a beat. In Shelton Jr.’s room, they review eighth-grade math homework online. Jefferies slips down the hall to tuck in Trinity, who’s just finished reading to Natasha.

By 9:30, the children’s clothes are laid out for tomorrow, their lights are off and doors are shut. Jefferies and Natasha head to their bedroom, where they lie awake and chat about the family and their days, until 11, when Natasha drifts off to sleep.

And with that, Jefferies finds himself heading back downstairs to his office, just as he did this morning, and just as he’ll do tomorrow morning. He checks his inbox and settles back into the dissertation he’s completing for the University of North Carolina at Charlotte educational leadership doctoral program, which he expects to wrap up next spring.

His eyes start to fail him around 1 a.m. Tomorrow, he’ll be “Principal Jefferies,” the man who is determined to transform West Charlotte’s 51 percent graduation rate and to give CMS its coveted 77.6 percent EOC pass rate. But for now, tonight, there’s just sleep.