When an affiliated community minister at Charlotte's Unitarian Universalist Church first set out to help disadvantaged prisoners, she never imagined it'd be on screen 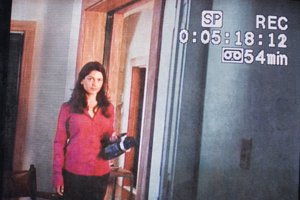 Minister and filmmaker Mummert received accolades from the Media that Matters Film Festival for her work on her documentary, Perversion of Justice.

Twenty-seven-year-old Melissa Mummert pushes her way through shouting protesters, many holding signs that read "Execute Justice, not People" or "Enforce the death penalty." Wearing a T-shirt, jeans, and flip-flops, Mummert shivers slightly from the cold breeze blowing in off San Francisco Bay. As she works through the crowd, she spots a group of Buddhists sitting and praying in the midst of the chaos. The calm in the middle of the storm. "That's where I'm going," she thinks.

She sits down, cross-legged, quietly protesting the execution of a prisoner at San Quentin State Prison. She stays that way for hours, protestors milling about her, as night falls and midnight arrives. She says nothing. She watches the people, dozens of them, and sits until the execution is done.

In the early morning following the execution, she slips into her one-bedroom apartment. Her father, George Mummert, visiting from Missouri, is asleep on the couch. Earlier, Mummert had asked him if he'd attend the protest with her. He declined that day, but he had done his share of sit-ins over the years. His own advocacy work, however, nearly ended after serving six months in a federal prison for trespassing on an Air Force base to plant a white pansy when Mummert was eleven years old. A few years after his release, Mummert walked with him along I-70, reliving the missile silo protest walk he had organized years earlier. The hot Missouri sun beat down on her as she wiped the sweat off her forehead with her purple and red tie-dye T-shirt. She remembers the thirty or so people that followed her and her father, and a proud smile crept across her face.

It's a balmy afternoon in the spring of 2007 and Mummert rushes around her house in south Charlotte, grabbing stacks of paper and printouts to distribute at the screening of her documentary, Perversion of Justice. With a few minutes to spare, her husband, Jay, whom she met in seminary, walks in from his job at the Unitarian Universalist Church to watch their twenty-two-month-old daughter, Annie. In 2003, Mummert and Jay moved from Berkeley, California, to Charlotte when he accepted a position as minister of the church and Mummert accepted a position as an educator at the Mecklenburg County Jail.

When Mummert and two of her students from UNC-Charlotte, where she's now teaching an independent study course, arrive at the Chapel of Christ King in the high-poverty Optimist Park neighborhood for the screening, the doors are locked. After some frantic phone calls, Mummert convinces an administrator's husband to come open the church. The attendees are dressed in tank tops and shorts, a sharp contrast to Mummert's black pants, gold top, and dangling earrings. Her wavy brown hair cascades past her shoulders. Before the film starts, Mummert addresses the crowd of twenty only briefly—she'd rather the film speak for itself.

As the chapel lights dim and the documentary rolls on the church's large, flat-screen television, thirty-five-year-old Mummert focuses on the audience's reaction. She knows the film so well that when the audience laughs, she knows Hamedah Hasan is on the phone from prison chastising her three daughters for staying up too late. When the audience moans in disgust, Hasan's sentence is stretched to twenty-seven years.

Mummert stands back, uneasy, watching her hard, exhausting, sometimes painful work unfold on screen. Although she's proud of the movie, she nitpicks her editing rather than enjoying the film.

It was a long but relatively straight path that brought Mummert to the chapel. She spent years watching her dad fight for the justice of others, eventually watching him go to jail for what he believed in. She worked as an online writer for a news organization and a nanny in Hollywood. Her first rewarding job, she says, was at a homeless shelter working with youth in Los Angeles. But, still, something was missing.
One night she sat in front of her computer, her screen reflecting the blur of car lights from the Ventura Freeway. Then she Googled her future. She typed "counseling." She shook her head, no, that's not it. She entered "social work." No. Still not right. She eventually typed in "ministry." "That's it," she thought.

Unitarian Universalism, which stresses faith in human beings and offers a wide-open theology, essentially allowed Mummert to believe whatever she wanted. But the real draw was simple: it emphasizes social activism.

While a student at Starr King School for the Ministry in Berkeley, Mummert had two options: intern at a hospital or a prison. She chose prison.
Other interns organized groups and educational sessions for inmates, but Mummert, daunted by bureaucracy, would sit quietly and wait for someone to approach her. Her true talent was engaging people in a conversation, listening and waiting for them to open up. The other interns were reluctant to simply interact with the women without hiding behind the shield of an educational program.

"It's really scary to show up as who you are and just sit and be quiet," says Sarah Moldenhauer-Salazar, who was an intern with Mummert. "They may not like you; they may not want you there. She came to see that that was a special thing about her: her ability to be courageous in the face of the unknown."

In one of these conversations, a woman told her that she was serving ten years for merely translating a drug-related phone conversation for her boyfriend. After talking to other female prisoners, Mummert realized that it wasn't uncommon for women to serve such disproportionate sentences. At first, she was reluctant to believe the women. They were inmates, after all. But something inside her told her to follow her instinct, trust the women. She began counseling them, but it didn't seem to help. Mummert felt that advising the women wasn't enough when there was a chance she could make a change outside of the prison. She could work to change the policy, the law. It was then, after weeks of listening and watching their tears, that she decided to make a film.

"These are people, not stats," she says. "There was no guy pointing and telling me to do it. It's a very intuitive, creative force that points you to your life and work. You can say no, and you can say yes. That's when life gets interesting."

Then she met Hasan through Families Against Mandatory Minimums, an organization dedicated to fighting mandatory minimum sentences. Mandatory minimums were set in place by the federal government in the 1980s. They were designed to remove a judge's potential bias in sentencing. Hasan was serving what was originally a twelve-year sentence for a cocaine conspiracy when she became one of the first members of the organization. After they exchanged letters and phone calls for a few months, Mummert and her film crew drove to the prison in Washington state from San Francisco to meet Hasan. The two were allowed to talk privately in a room, and Mummert was immediately drawn to her. Hasan expressed herself and her predicament so eloquently that Mummert knew she would be the focus of her film. She was able to articulate her feelings and thoughts without the rage that consumed her more than a decade ago when she was first sentenced. During the two-and-a-half-hour interview, something clicked in Mummert—this was exactly what she was supposed to be doing with her life. A few months later, when Hasan's sentence was increased to twenty-seven years after a government appeal, Mummert's determination only strengthened.

"We all have those voices that shut us down, and it's miserable. If I hadn't deepened my connection to Hamedah…" she says, her voice trailing off. "I couldn't quit, because she was still there. It was just overwhelming, and I didn't know what I was doing. It wasn't an option to quit."
A few years later, after a full day at the jail, an exhausted Mummert gets into her car, months before the film is ready to be released. As she drives down North Davidson Street, her eyes feel heavy. Though she'd rather be going home to be with Jay, she's heading to the studio to spend a few hours editing her film. Her eyelids droop as she edits; the work week is finally taking its toll. But then Hasan comes on screen, and she remembers her promise. Mummert's eyes widen, and a pang of guilt sinks into her stomach. The value of self-sacrifice is well instilled in her from the protest activities of her father. Her struggles with the film are put into perspective by her close friend in that California prison cell. "If I can give up some of my time with my family, Hamedah might get to be with hers," she thinks.

When the film finishes, Mummert turns off her Apple laptop, turns on the chapel's lights, and flashes a sheepish grin to the group.
"Does anyone have any questions," she asks, looking around at the small crowd. After a few seconds of silence, the audience begins. "How is Hamedah doing now?" "Has anything changed?" "What can I do to help?" At the end of the screening, the man who opened the church pulls her aside. "You need to come back when more people can be here," he says, his voice tinged with disappointment at the misunderstanding of the doors being locked. Mummert stays for a few minutes, answering questions and passing out literature and buttons to anyone who will take them. The film has received noteworthy accolades, including acceptance into the Media That Matters Film Festival, where it won the Changemaker Award.

For many, the film serves as an introduction to the world of mandatory minimum sentences. It's the personal story of Hasan, but it echoes that of thousands of women in federal prisons nationwide.

"Melissa was able to delve into some issues that some families wouldn't be as comfortable sharing off the cuff," says Monica Pratt, who introduced Mummert to Hasan through Families Against Mandatory Minimums. "While it's obviously a very sympathetic portrayal of their lives, it cuts really close to the bone for other families who are dealing with it."

No matter how many times Mummert views the film, it always motivates her to do more. Last year, she left her job at Mecklenburg County Jail to found a program for children of incarcerated parents with the Center for Community Transitions. Drawing on her own experience as well as that of Hasan's children, she plans to work in schools starting this fall to help the children of parents serving mandatory minimum sentences. At this point, there's very little Mummert can do to help bring Hasan home sooner. She can, however, support children who have parents in prison.
As she drives home that day, inspired and energized after introducing another group of people to the issue of mandatory minimum sentencing, Mummert runs her hand through her hair. She's not discouraged by the small turnout. That's how change happens, she thinks, when small groups of people get together and have meaningful conversations.

She looks in her rearview mirror, as if she's looking back, years even, at the path that led her to this point. She's created a film that can inspire people to act. She's not perfect, and she accepts that. If we all waited until we were perfect, nothing would ever get done, she thinks.
And a proud smile creeps over her face.