The Real Reason Why McCrory Lost

It’s been assumed among national and statewide observers since Election Day, and especially since he conceded a month later: House Bill 2 cost Pat McCrory a second term as North Carolina’s governor.

I’m not so sure. The election results are official. You can crunch the numbers yourself. With the caveat that there’s no way to know for sure what was in the hearts and minds of every voter, you can make a hell of a case that McCrory would have won if not for about 12,000 people in north Mecklenburg County who ordinarily vote Republican, and who voted for McCrory in 2012—but who in 2016 cast their ballots for Democrat Roy Cooper over the planned Interstate 77 toll lanes project. 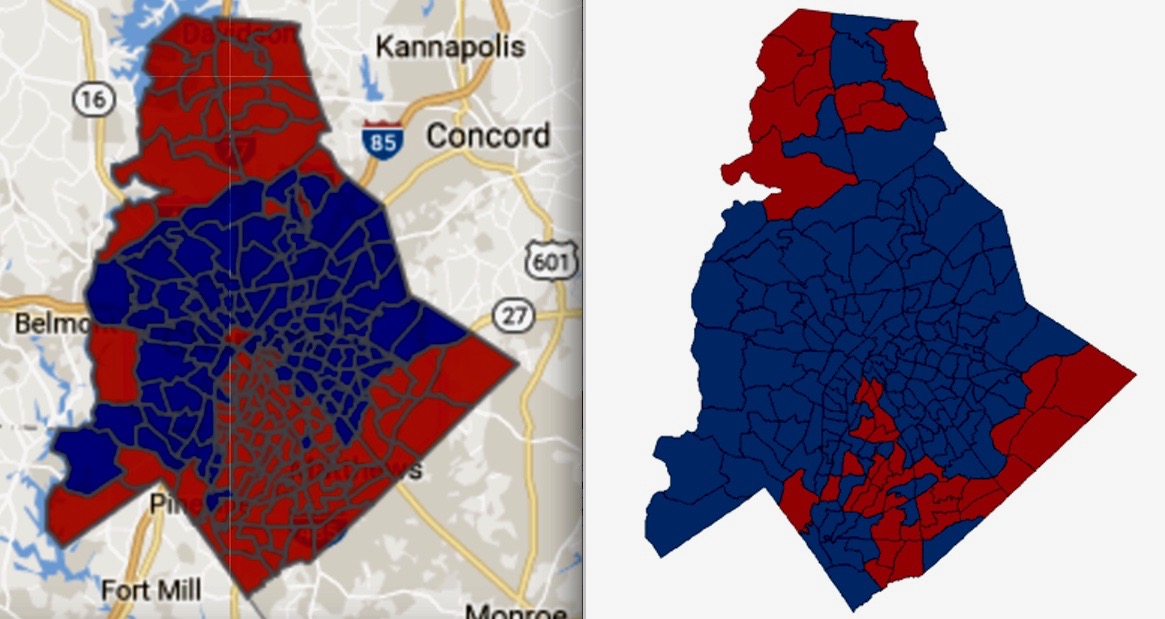 Mecklenburg County precinct results for the governor’s race in 2012 (left) and 2016.

That project, which the state is working on now and plans to finish in 2018, has been a hot poker in the sides of Lake Norman-area residents since it was first proposed nearly a decade ago. It marks the first time North Carolina has outsourced a highway project to a private company—a concept tried in other states, and with decidedly mixed results. McCrory has supported it from the start.

The state contract with a subsidiary of a Spanish infrastructure company, Cintra, calls for the company to operate 26 miles of added lanes from Huntersville to Davidson under a 50-year contract with steep cancellation penalties. A ferocious opposition among citizens and a few public officials along the route says the project will do little or nothing to ease traffic, plus lock the state into a contract harmful to taxpayers, when it could just add more free lanes at roughly the same cost.

Organizers of the opposition, many of them Republicans, vowed to make McCrory pay at the ballot box. It looks like they kept their promise. Four years ago, McCrory won all 13 north Meck precincts, basically all the Lake Norman-area precincts north of I-485. (Here’s the countywide precinct list.) This year, five of them—three in Huntersville, one in Cornelius, one in Davidson—switched to Cooper, by a total of 2,111 votes. McCrory won them by a total of 5,839 votes in 2012. That’s a flip of 7,950 in a statewide race decided by a total of 10,277 votes.

Take Precinct 127, home to just under 4,000 registered voters, who cast ballots at Hopewell Baptist Church in Davidson. McCrory won that precinct by 1,569 votes four years ago over then-Lieutenant Governor Walter Dalton. This year’s margin over Cooper: 73. If you add the differences between 2012 and 2016 of the two additional Huntersville precincts, you get a flip of 4,119 votes. Add that to the total from the five Lake Norman precincts Cooper won, and you end up with a flip of 12,069 votes—more than Cooper’s statewide margin of victory.

I’m not in the habit of quoting myself, but after the primaries back in March, I wrote about the possibility of the I-77 toll lanes project costing McCrory the election. “Wouldn’t that be a hell of a screw-turn,” I wrote, “McCrory losing his governorship by pissing off a group of voters from his own party and home county?” Well, consider the screw turned. I posted that on March 16, exactly one week before the General Assembly passed HB2.

Look, there’s no question HB2 was a massive issue statewide. But rural, small-town, and suburban support for the law likely cancelled out urban opposition to it. The final election results represent yet another twist, this one in the opposite direction: For all the sound and fury of the law and its supposed effect on the race for governor, there’s a real possibility that it didn’t matter much at all.

This article appears in the December 2016 issue of Charlotte magazine.
Categories: The Buzz

Where to Go Apple-Picking Near Charlotte: 2022