A renovation brings new life to a charming townhome in Eastover 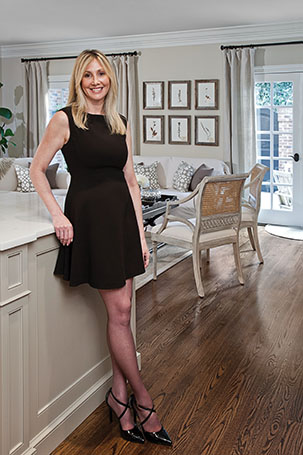 When Shawn and Andrea Quinn moved to Charlotte from Florida in 2007, they knew they wanted to rent for a while before purchasing a home. “We lived in Florida for 10 years prior to moving here, and we had an open floor plan [at our old house],” says Andrea. “So we knew we wanted the same thing.” Nearing the end of their lease, the couple was out walking in the Eastover neighborhood when they noticed a townhome for sale in Perrin Place, just down the street from where they were renting. “We were looking for something that was really charming on the outside but needed a lot of work on the inside so we could put our own stamp on it,” says Andrea. “But [after finally seeing the inside], Shawn was more optimistic than I was. I didn’t see that there was an easy way to fix [the home] without it costing a lot of money.”

The 3,300-square-foot, three-story townhome did, indeed, need lots of work. The downstairs living area was disjointed rather than the open layout the Quinns hoped for, while the aesthetic—décor and finishes that hadn’t been updated since the 1980s—was outdated and dark. Seeing the potential, though, Shawn convinced Andrea to seek out quotes from contractors, who estimated that the complete overhaul of the home would cost them much less than the Quinns originally anticipated. In January 2011, the Florida transplants decided to go for it. They bought the home and soon after began renovations with builder Andrew Roby.

The first issue at hand: reworking the entryway and stairwell, which Andrea refers to as a life-sized Chutes & Ladders. “As soon as you walked in the front door, the stairwell was in front of you,” she says. Roby and his team reworked the switchback stairwell to create a seamless and cleaner entryway and staircase. The second obstacle to tackle was the less-than-ideal floor plan and small, galley-style kitchen. Lucky for the Quinns, none of the walls in the home were load-bearing, allowing the contractors to tear down the existing walls to create an open layout. 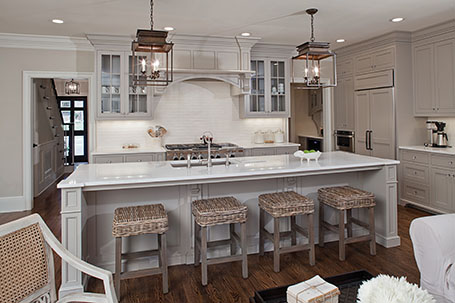 An open floor plan was important to the Quinns; their combination display kitchen and great room was the result.

To help guide the process, the Quinns hired space planner Jeanine DeVaney of Charlotte In-Vironments, who laid out the floor plan so the contractors knew exactly which walls to leave or take down. “We told her what we wanted as far as the kitchen layout, how the bathroom should flow,” says Andrea. “We went back and forth with her two to three times until she got it where we wanted it.” The result: a large kitchen that overlooks the living room, with an oversized marble island, custom cabinetry, and butler’s pantry.

Updating the décor was one area in which the Quinns didn’t enlist help. Though she’s not a designer, Andrea has a discerning eye for style and opted to replace the outdated finishes—bright-orange grass cloth running two stories in the foyer, 1980s wallpaper in every room—with more modern touches such as white Walker Zanger subway tile backsplash, custom cabinetry and paint by Mint Hill Cabinets (“They’re probably my favorite feature in the whole house,” Andrea says), and new trim, molding, and casings throughout the home. To complete the transitional look, Andrea scoured local shops like Alexander Scott and Botanica as well as High Point showrooms and antiques stores in Beaufort, South Carolina, for furniture and accessories.

Though the renovation was relatively seamless, there was one major hiccup along the way. In renovating the downstairs, Roby and his team found that the original wood floors—which the Quinns had already refinished—were sagging in the dining room. “We had to bring in a structural engineer and secure footings under the house to level the floor out to be able to support it,” says Andrea.

In the end, though, the benefits of renovating the home outweighed the obstacles, and Andrea is thrilled Shawn helped her see the potential in what she now calls her dream home.

“Every day I walk in the house, I have a big smile on my face. It turned out exactly how we wanted it to turn out, how we hoped it would turn out,” says Andrea. “There’s really nothing I would go back and change.”

This article appears in the September 2013 issue of Home + Garden.
Categories: Decorating, Spaces
Contest of the Month