The Sound and the Fairway

YOU'D EXPECT IT to be quiet here, under a waning moon and beside the dew-flecked grass at Quail Hollow Club. It’s an hour or so before sunrise, about that long before fans in polos and khakis and sunblock stroll in for the first day of play at the PGA Championship. The glass doors to the hospitality tents have fogged over from the humidity. Hunter green bleacher seats are empty.

A buzz fills the air, though, an actual hum from grumbling generators and chattering lawn mowers. Golf carts zip by, their headlights streaking through the last traces of early morning fog. Volunteers with official backpacks mingle outside the dark Championship Shop.

Three carts pull up along the 18th fairway, the end of the Green Mile. This place’ll be packed come Sunday afternoon, when fans will crane their necks to see the final putt. But right now, it’s just the grounds crew. Fourteen of them roll off the carts, gas-powered blowers strapped to their backs, engines running. In silhouette, they look like the Quail Hollow Ghostbusters.

The young men form a line across the fairway. In unison, they walk toward the green, sweeping their blowers from side to side. It’s loud. Most of the crew sport headlamps that twitch with each purposeful step. As they get closer to the green, the men pass through the electric blue glow of a jumbotron that’s warming up. They walk past the nameless leaderboard, still empty. All the golfers in the field are even. There are no positions to change yet.

Behind them, back toward the warming sky and No. 17, a worker putters through one of the course’s lakes in an aluminum jon boat. Its motor splish-splashes across the smooth water. The backpack-armed crew is finished blowing off the grass; they’ve piled back into their carts and have driven off.

Workers dry off the tables and chairs outside the hospitality suites, sponsored by companies that sell trucks and insurance, watches and mutual funds. Coffee is brewing. John Deere engines rattle in the distance. 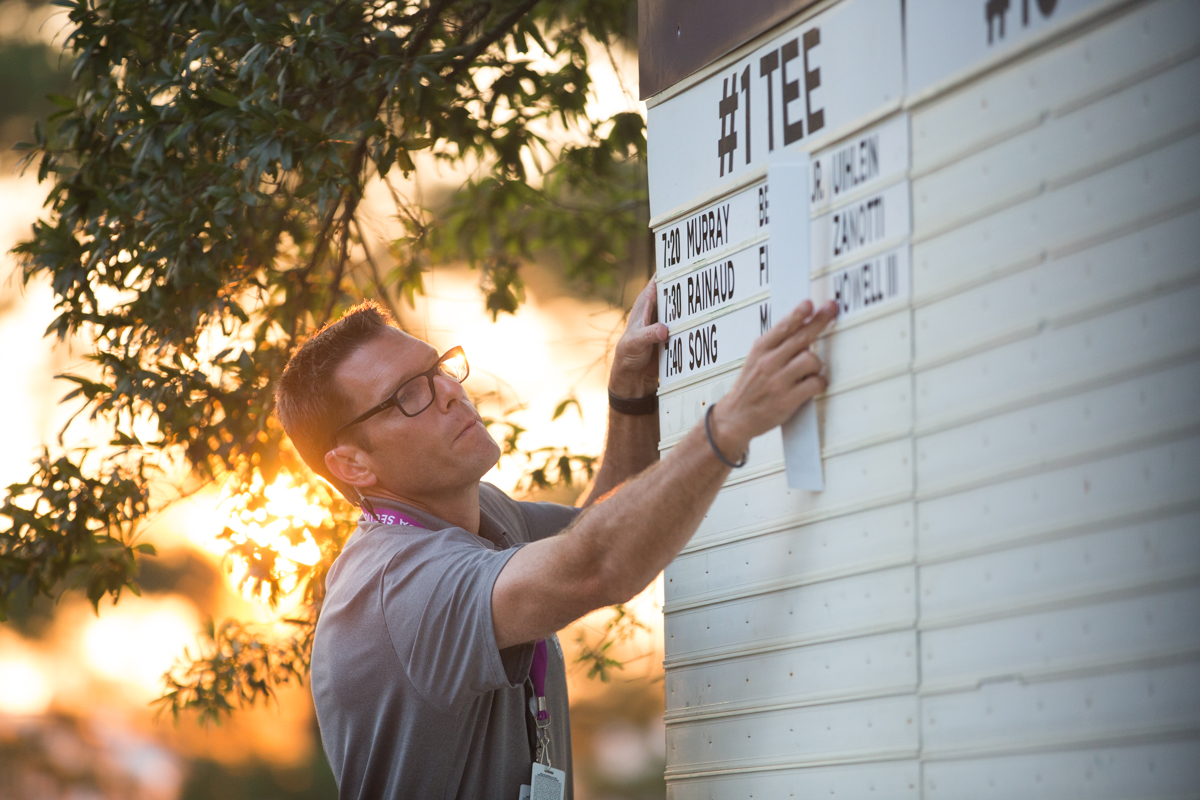 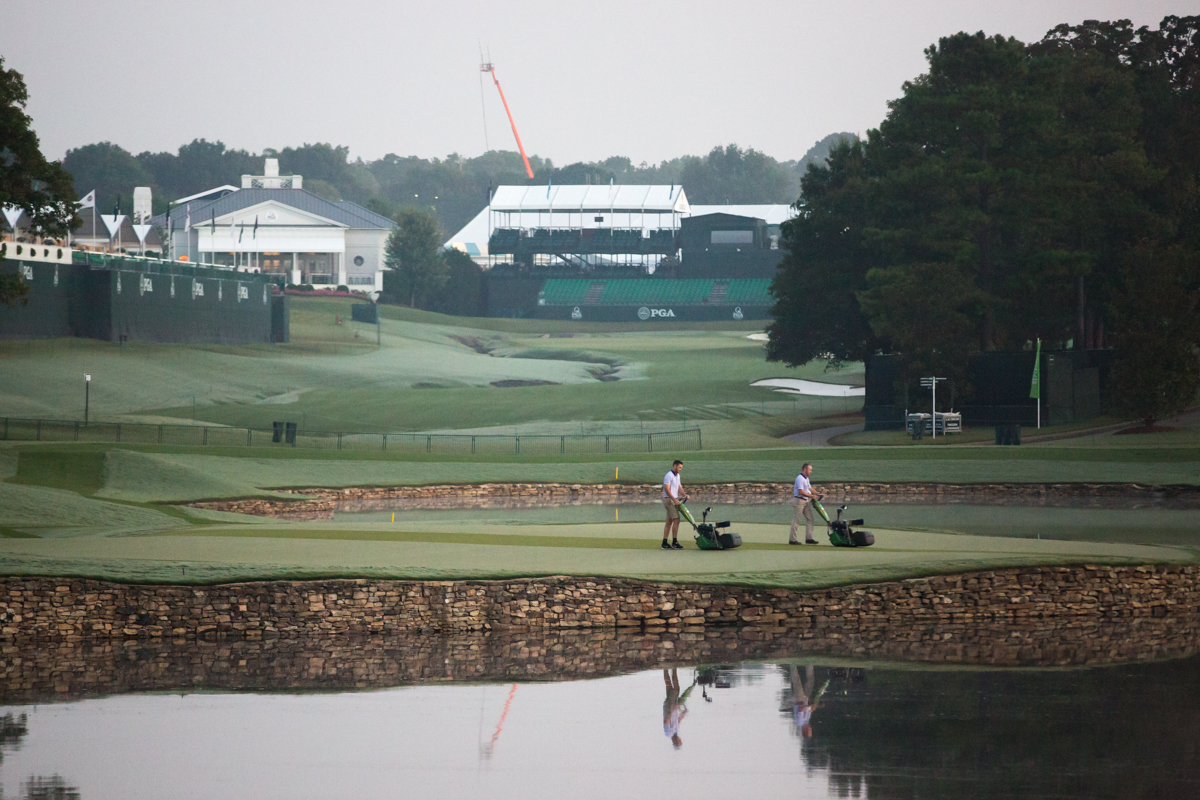 Fans have started to wander through the course. They pass a stand of holly bushes concealing the club’s swimming pool. Music thumps from a set of speakers on the pool deck, a 1997 Will Smith song. “I’m goin’ to Miami,” he raps. “Bienvenidos a Miami,” comes the reply. You’d expect to look through the greenery and see oiled-up bodies in bikinis and trunks, but the lounge chairs are empty. Spectators walk by without noticing. They’re too eager to stake out their positions at the 18th green, to swaddle their butts in the fabric of folding chairs, to get comfortable for a full day. One guy sits by himself in the bleachers. He’s probably the dude who will yell, “Get in the hole!” the loudest on Sunday.

It’s after 7; the sun is up now. Golfers practice their putts. They twist their shoulders and hips at the driving range.

A small crowd has gathered at No. 1, where a 24-year-old from Raleigh named Grayson Murray is about to ping the first ball with the first club. Two men with ball caps and sock tans set glistening water bottles on their folding stools. A grandmother in a straw hat reapplies her lipstick. Fathers and sons inch toward the tee box. After days of practice rounds, months of anticipation, years of planning, the tournament is about to officially start.

The marshal holds his hands to the sky, palms out toward the crowd. Murray nudges his heels apart, fixing his stance. People freeze, hands on hips. The air is still. This is the quietest it’s been all morning. 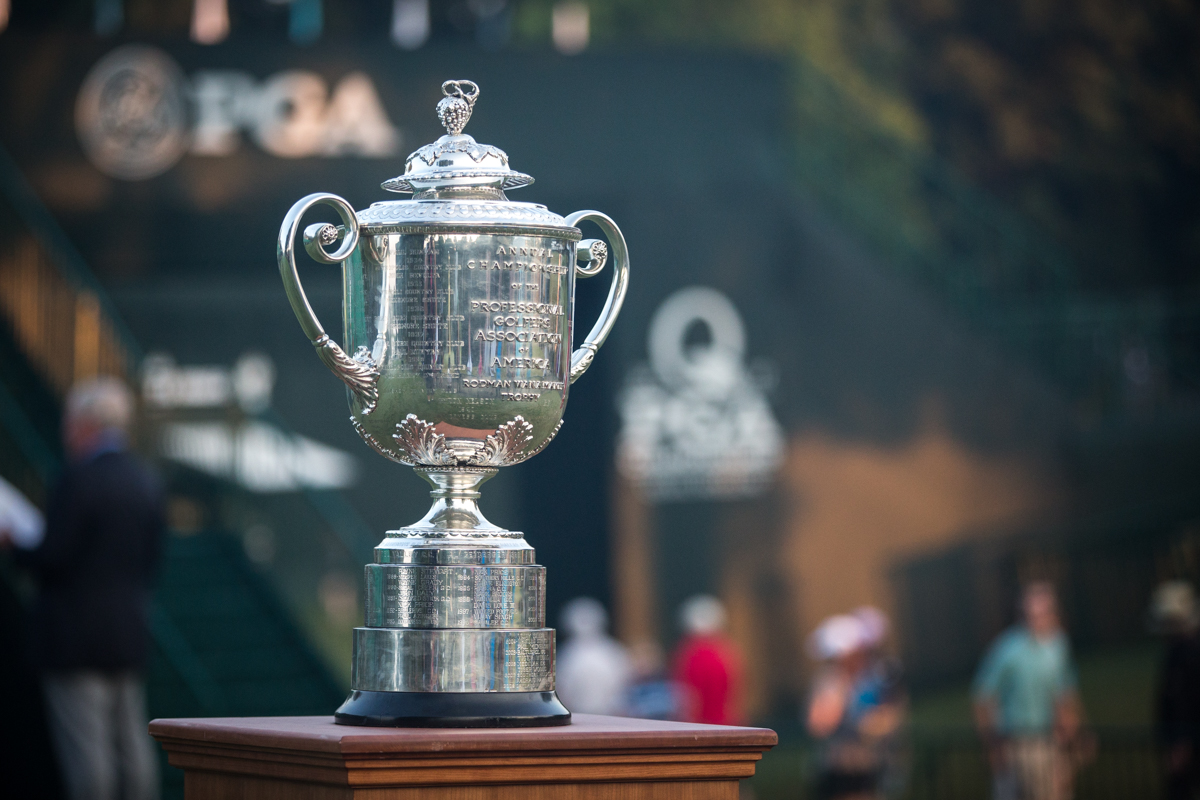 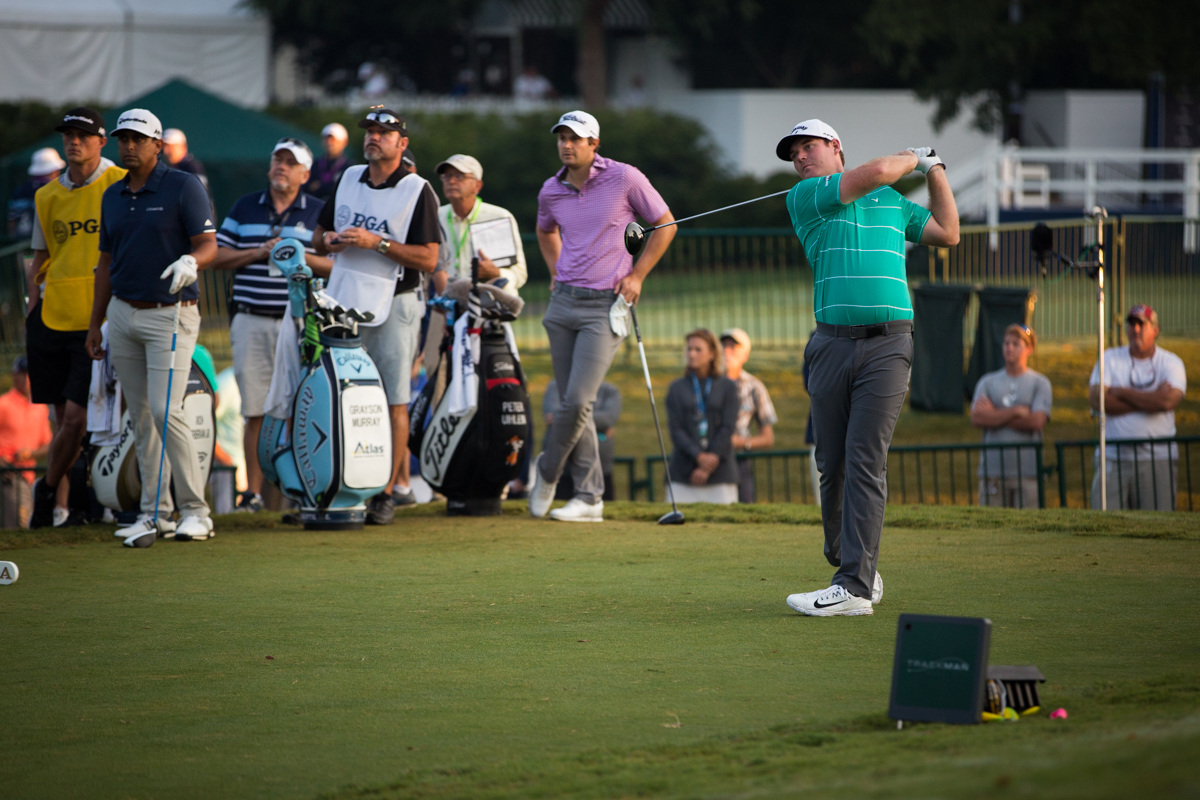 Grayson Murray, from Raleigh, drives the ball from the No. 1 tee to kick off the first day.