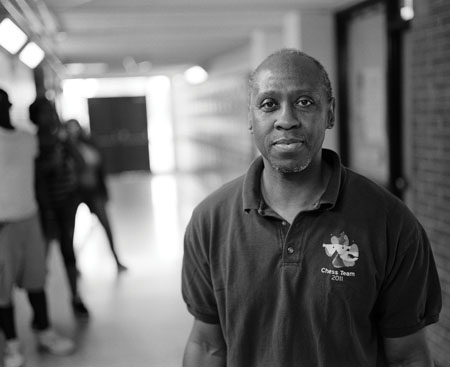 At 5 a.m., the clock radio breaks the stillness with 90.7 FM talk, before Spencer Singleton smacks it silent. He shuffles to the shower, careful not to further wake Mary, his wife of thirty-nine years.

Singleton combs the tiny salt-and-pepper curls that cling to his scalp and grooms a short, snowy beard. He slips on a pair of navy-blue slacks, a freshly pressed, sky-blue oxford, and a speckled blue-and-gray tie.

A long, plastic neck badge that reads “Social Studies Teacher” and bears the Charlotte-Mecklenburg Schools emblem completes the ensemble. Singleton knows this school-morning routine like the valves on his trumpet; he’s been doing it for seventeen years. But with more than 3,000 mornings like this behind him, he has only eighteen left until school lets out for summer. Last weekend, he celebrated his sixty-first birthday, and on July 1, he’ll begin his retirement.

For him, it means leaving behind students whom he adores and knows need his support, but it also means leaving behind the pressures of End of Course tests and the worries about whether his scores will keep him on the payroll. Singleton has taught Civics and Economics at West Charlotte High for eleven years, and in two weeks, he’ll deliver his final batch of EOCs. Internal West Charlotte projections state that, based on last year’s scores, 127 out of 283 West Charlotte students will pass the C&E test. But 208 need to pass for WCHS to reach the goal set by CMS, and Singleton feels the weight.

Now Mary’s awake, and the two join hands to pray, just as they do every morning. Today, they recite the Priestly Blessing from Numbers 6:23-27. Mary is also a teacher—special education at Cornelius Elementary—so they ask for the strength to get through the day and be effective educators.

It’s nearly 6. Singleton hurries downstairs to the kitchen, where he gulps down a glass of pomegranate juice and grabs a banana before hopping into his 2007 Camry—a gift from Mary. A black leather briefcase rests on the seat beside him. It’s generally filled with the full week’s lesson plans—which Principal Jefferies expects on Sundays—which Singleton composes on the weekends, but with the EOCs looming, review has been the only objective for a month.

It’s a dark drive on I-85, from Mount Holly to West Charlotte, and traffic is light. Singleton shuffles the radio between the local news and the sports station. He loves the Miami Heat and has to see how they’re matching up in the playoffs. Within fifteen minutes, he pulls up to an old strip mall on Beatties Ford, home to Niki’s Food Shop, his regular breakfast spot.

“Hey, Teach!” the owner greets him, and a few familiar faces spin around to nod hello. One of them shouts, “Sergeant!” even though Singleton was actually an Air Force major before becoming a teacher. He tells the cashier, “The usual”—two eggs, over hard, with grits, toast, bacon, and a Styrofoam cup of ginger ale—and slides into a two-seater booth. Singleton listens to the guys around him—regulars, too—chat about their lives, and in return, offers a few comments as he picks at his plate. At 6:30, he heads a couple of streets over to school.

Ten minutes later, Singleton is in his classroom, tucked away in the burnt-orange-brick F-building at the back of campus. The walls are covered with posters of U.S. presidents and a giant map of the world, and amid the rows of desks are four desktop computers and a throwback TV cart. Singleton’s lesson plans are filed away in a manila folder that hangs behind the door, ready to be reviewed in case administration pops in for a surprise observation.

He lists first block’s objectives on his blackboard: “Study for other EOCs.” The class is AVID (Advance via Individual Determination), which focuses on college preparation and does not have an EOC. Singleton is most thankful for that. The students won’t begin arriving until 7, so he uses the spare time to sip his ginger ale and grade last week’s Civics and Economics EOC mini assessments—short review quizzes. He tests them three times per week. Third-block C&E has clearly grasped the material, but he’ll have to be even more aggressive than he’s already been with fourth block’s review on topics such as the founding documents, the Articles of Confederation, and the court system.

When the bell rings, Singleton is at the door, smiling. He pats his students’ shoulders as they file in. Some of them have heard the word and chirp, “Happy birthday, Mr. Singleton; you didn’t tell us!” They’ll begin with thirty minutes of silent reading, followed by an hour of independent EOC study for their other classes. The group is a large, rowdy bunch—thirty-one kids—and though at five-foot-eight Singleton seems far from intimidating, he commands their respect.

A 9 a.m. bell means dismissal and the start of Singleton’s planning period. The Social Studies Department meets on Thursdays to discuss methods for helping students master the EOC material, but since it’s Monday, Singleton is on his own.

At 10:45, third block is in full swing, and Singleton surveys his C&E class, scribbling away at the warm-up. Today, they’ll focus on the Bill of Rights. “How many days till the EOC, guys?” he rouses them excitedly. They barely make it through a guided reading before the lunch bell. It’s a relief; the kids have been antsy. They’ll reconvene in twenty minutes.

Though he’s brought a banana for lunch, Singleton scoots to the vending machines for a can of Coke, a PayDay candy bar, and a pack of peanut butter crackers. He dines at his desk over a game of online chess—a guilty pleasure—and email-checking. And before he knows it, the students seep back in.

After a Jeopardy! review game his students love, there’s just enough time for a daily mini assessment. It’s a compilation of the same EOC sample questions the students have revisited the entire year.

The bell sounds at 12:45, the start of fourth block, and Singleton welcomes in a boisterous bunch. Most of his A-students take self-assigned seats on the left side of the room—a few ESL (English as a Second Language) girls quietly fill a corner by the door, and Paige McNeil and Quintravius Talford sidle their desks together in the third row, only to have Singleton separate them with a smile and a shake of his head.

He is confident that his A-students will deliver the level three and four EOC scores they need to pass the class. But he roots for them all. They’re weighed down by struggles that go far beyond the books. For some, it’s a language barrier; for others, a teenage pregnancy; and
others, homelessness.

Singleton will repeat the previous class’s routine with this group, though he’ll revisit a few points that third block has already absorbed. “How many days till the EOC?” he inquires, humorously overexuberant. “Eleven days!” comes the response.

There are a few distractions and the white noise of chatter around the room, but Singleton picks and chooses his battles. Three times, he instructs one student to remove his baseball cap. He asks another sleepy one to lift her head from her desk. They wade through the warm-up, guided reading, and on to Jeopardy! which proves a crowd pleaser once again. When Singleton informs the class that they’ll play using Goal One topics, a student groans, “Why are we doing Goal One again?” “Because you keep getting it wrong,” Singleton replies politely and resolutely, dimming the lights. Questions like, “Who was the founder of Pennsylvania?” and “What document extended the rights of the English beyond the Magna Carta?” fly, and on the rare occasion that one team doesn’t answer correctly, the other begs for a shot at the money. At 1:50, the class clears their desks for the mini assessment. They work silently until just before 2:15, when the afternoon announcements precede the final bell. “Study, study!” he squeaks, winking at Paige and Quintravius as they fly through the door. 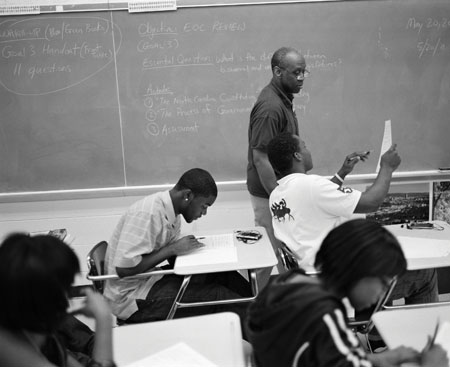 This is Spencer Singleton's last year teaching. He retired at the end of the school year, though he plans to continue working with the chess club that he advises. But he still felt the pressure that EOCs bring. With two weeks to go before the tests, CMS data projected that 127 of West Charlotte's 283 Civics and Economics students would pass the EOC. The district had set a goal of 208 students passing. The last month of the school year was spent almost entirely in review mode.

Singleton packs up his briefcase and straightens the desks while he waits on Enrique; he’s the only member of the tiny chess team Singleton coaches who can meet on Mondays. The team teaches chess at elementary and middle schools each afternoon of the week, using Singleton’s prized chess set.

On the ride to Mountain Island Elementary, Singleton and Enrique stop by Subway for quick sandwiches and sweet tea. Singleton treats the kids to a pretutoring snack every day, out of his own pocket. They chat about Enrique’s college applications and financial aid. Singleton’s been on the alert for scholarships, and he reads over Enrique’s essays for each.

At the elementary school, they show ten wide-eyed first- and second-graders the ropes of chess strategy. The kids remain surprisingly engaged for the entire session and are fairly impressive when it comes to grasping the sport; Singleton thinks they could even be ready for a tournament next year, and since he’ll remain the club adviser even in retirement, he’ll challenge them to it.

Although he’s backtracking, Singleton drops Enrique by his house, which is near the high school. They carpool every evening because bus transportation isn’t available to Enrique. And although Enrique feels like an imposition, Singleton reassures him with a pact they’ve made: “If your parents can get you to school in the morning, I can get you home at night.”

Traffic is brutal on the trek home. Singleton needs to stop by the chiropractor for a neck-and-back adjustment, as he tries to do every Monday and Thursday, but the center closes at 6, and chess kept him a little later than usual.

The second he hits home, Singleton ditches his tie and tosses it over the shoulder of the sofa. It’s 6:30, and Mary is already there, napping softly. He nudges her awake with a smooch on the cheek. “Are you sleeping?” “I was,” she half-laughs. He offers her the second half of his sandwich and falls into his favorite old chair. They turn on a couple recorded episodes of The Colbert Report and The Daily Show with Jon Stewart and veg.

Just as The Borgias, a crime drama set in 1492 Italy, comes on Showtime, their “adopted” son, Austin, hustles down the stairs. Now twenty-five, he’s been living with them since he was a sophomore at West Charlotte, when he joined the chess team and shared with Singleton his strained living situation. To help, Spencer and Mary took Austin in as their own. Their other three children were already grown. “Want to join us?” Spencer asks Austin, patting the couch. But when Austin sees The Borgias, he heads back upstairs.

Weeknight freedom is a rarity for Singleton. On Tuesdays, he practices his trumpet at church; on Wednesdays, he has fellowship band practice; and on Thursdays, he attends Bible study. But luckily, tonight, he’s home for the NBA Playoffs. At 9, he retires to the bonus room, checks his email on the family computer, and clicks on the Dallas Mavericks and Oklahoma City Thunder game. Singleton usually tries to go to bed by 1o, but he makes an exception. Austin joins him, and they stretch out on the sofa until the game clock winds down. With that, they say “goodnight.”

Singleton feels a little guilty for a minute, bypassing the bathroom and not brushing his teeth, but he’s worn out. He crawls under the covers next to Mary and shuts off the side light. Tomorrow, his third-block kids will shout, “ten days!”