The Test of Time

Frank Manzetti’s Tavern remains a staple in spite of the newer, more chic eateries nearby 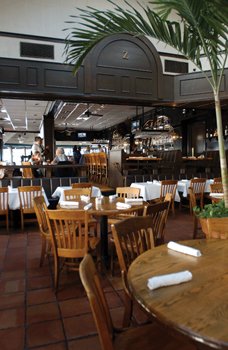 Time was, Manzetti's was SouthPark's top destination restaurant. This was in those dark days before fancy chain steakhouses and seafood shops discovered little ol' Charlotte, before the mall became a gleaming paean to luxury brands, before someone decided that we needed not one but two giant drugstores on either side of the mall.

I'm happy to report that little seems to have changed at the twenty-one-year-old establishment, and we're better off for it. The place has aged well. When you enter, smiling hostesses greet you immediately. The view beyond is of a classic, glorious bar, nice and long and backed by rows of shiny liquor bottles. With the fancification of the SouthPark dining scene, the bar at Manzetti's is one of the few casual places left where you can suck down a few brews, toss back a couple gin-and-tonics, or quaff a martini in come-as-you-are surroundings. And if the post-five o'clock scene on any given day is any indication, plenty of people do this.

With white tablecloths, layer upon layer of dark wood, and comely servers of both sexes, Manzetti's just looks and feels like a restaurant. The elevated bar area, where we were seated on a slow weeknight early in the New Year, affords a view of both dining areas, which are typically filled with a buzzing mix of people, from promsters (when in season) and business travelers, to hungry locals and power brokers, to, yes, the occasional celebrity. (On the last matter, at least, Manzetti's star has waned. In the days when the neighboring Marriott hotel was known as The Park, that's where visiting dignitaries of all stripes—from Oprah to the Stones to Pearl Jam—stayed, and Manzetti's was the de facto hotel restaurant. Of late, our server wistfully informed us, the restaurant can boast only of visits by the Rockettes and actor Michael Clarke Duncan.) Diners can also gaze into the open kitchen, outfitted with acres of stainless steel and lots of digital gizmos. 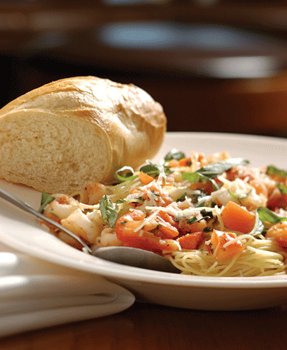 In addition to the steaks, chops, and seafood, enjoy easy yet savory pasta dishes such as this Tomato and Basil Capellini.

Manzetti's is not a place to come if you want to worry over your food. The steaks, chops, seafood, and salads are tasty enough, but you come here to converse and to entertain and to have a good time, and maybe just to rest after a long day at the office or at the mall. The Gourmet Chips—like nachos on steroids—are a signature item, and they're huge. Get them in traditional, Thai chicken, seafood, spinach, or barbecue chicken. Oyster appetizers change (Rockefeller, shooters), but unless you like only a little oyster with massive amounts of blue cheese, avoid the Buffalo oysters.

Salads are always an excellent bet here, as are pastas. With the former expect several meal-size choices and a sinful honey butter croissant; with the latter, expect leftovers. Steaks, which come charred on the outside and topped with a dash of garlic butter, have a hard time competing with the thick cuts of the Ruth's Chris crowd, but then again you aren't paying Ruth's Chris prices. A twenty-two-ounce bone-in rib-eye with a salad and a side for less than $30—that's not bad. And in this classic, friendly setting? That's pretty darn good.

This article appears in the February 2008 issue of Charlotte magazine.
Categories: Food + Drink, Restaurant Reviews, Revisit
Contest of the Month