In which our foreign correspondent takes in the election from Rome, and America becomes America again 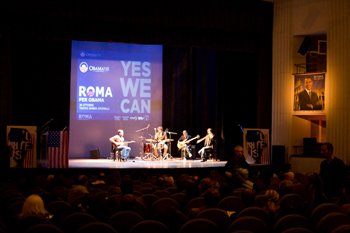 The woman to my left winced and leaned over to translate. The latest speaker had said something about the tiny acorn that grows into the big oak tree — a perfect addition to my little black notebook.

I got it at the Paper Skyscraper in July, on the day I left Charlotte. When I pulled up my truck bed was overflowing with duffel bags and plastic buckets strapped down by a web of rope and bungee cords, and by the time I hit I-77 the mattress on the roof was flapping like a sail in the wind. This continued through the night as I headed due North for New York.

After that I arrived in Germany for a newspaper fellowship, and during three months there and while floating from hostel to hostel on random freelance assignments since, the notebook has filled up with all kinds of nonsense. This particular event, on the Thursday night before the election, had no shortage.

I was in Rome to write about a local group called "Americans in Italy for Obama,” and they'd been invited to something called "Roma per Obama" at a small theater near the train station. Well-dressed Italians wore Obama buttons and sampled wine while B-list local politicians and civic notables took turns regurgitating campaign mantras in Italian from a podium draped with an American flag. An emcee who looked like an Italian Napoleon Dynamite, slightly more suave in a pale blue suit, guided us through a video compilation of memorable Obama victories and subtitled speeches. (Si, noi possiamo.) From the balcony above hung a gigantic poster of the candidate superimposed before the Colosseum, arms folded, beaming confidently down at the crowd.

What could they hope to accomplish? Someone suggested contacting family and friends in the States, as if they might be swayed by a random phone call from a distant Italian relative. Mostly it seemed like a chance for the somewhat important persons to hijack a little of Obama’s publicity in front of all the news cameras.

But even as I mocked I began to get a little sappy. There was something beautiful in the whole comic scene, as Napoleon Dynamite stood proud behind the American flag. And so I wrote this, beneath the line about the acorn:

Like it or not, this sense of awe and admiration for the American dream is what has driven the best and the brightest, woven among the huddled masses, to America since its inception. And that has been lost, probably stretching back further than eight years, and it is what only now is returning again, in this room, flags draped with pride in a foreign country…

Obama accepted the nomination on the stage, and there was a round of applause in both audiences, and in his speech, which was called "The American Promise," he said,

Some malfunction in the speakers made it sound like everyone in the theater said this too.

Family lore holds that my great grandfather almost missed the boat from Naples, where I happen to be right now on another random assignment. He got to the dock as it was pulling away, and he jumped into the Mediterranean and swam out and was pulled on board. I imagined such thoughts in his head.

None of this, of course, has to do with policy or governing ability or anything other than a cheesy and powerful idea of what America can mean. The melodrama continued on election night as I sat at a Roadside Grill eating peanuts with a couple hundred Obama supporters. CNN called Virginia twenty seconds before the California polls closed, and we were counting down to an Obama victory. Cameramen crouched below the screen to catch the jumping up and screaming, and even the Italians were wiping tears from their eyes.

The sappy romantic comedy that is America and the rest of the world is back.

This article appears in the November 2008 issue of Charlotte magazine.
Categories: News – Web Exclusives
Contest of the Month