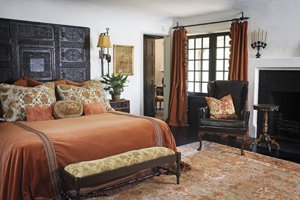 Angela converted an oversize piece of ornately carved oak paneling into a headboard by staining it a dark brown.

Angela Newnam always wanted to raise her family in a house just like the cozy Tudor-style one in Tryon, North Carolina, where she’d grown up. It was that childhood home that inspired her passion for the moody romance of seventeenth- and eighteenth-century Western European antiques.

But with three kids—daughters Anna, eight, and Lydia, six, and son T. R., three—she and her husband, Todd, were rapidly outgrowing their 4,000-square-foot Tudor-style cottage in Plaza Midwood. So in October 2005, they decided to expand and planned an addition that would more than double the home’s square footage. They tackled some longstanding cosmetic issues—an incongruous 1980s addition; a dark, cramped kitchen; and horribly dated Berber carpeting, parquet floors, and mirror-covered walls. But mostly, they transformed Angela’s lifelong dream of a Tudor-inspired eighteenth-century English manor into a breathtaking reality.

The Newnams recruited Ken Pursley of Pursley Architecture to map out their plan. Pursley, who trained under famed Southern architect Bobby McAlpine and is now well known in his own right, lived up to his reputation for creative design and careful attention to detail. "We wanted the house to have a hand-built, Craftsman feeling that you see in Tudor homes from 300 years ago," says Angela. "But we also wanted all the modern conveniences, like built-in surround sound and Lutron lights. We worked very hard with Ken to minimize can lights, light switches, speakers, and air vents so that you can’t see them."

The actual crafting and construction fell to builder Ben Collins of the Salins Group. Collins was so determined to finish the renovation on schedule that he rented the Newnams his house down the street and lived over their garage during the renovation.

The renovation started from the outside. Angela wanted to replace the rarely used backyard pool with a more traditional European detail: an English rose garden and courtyard. To make the garden even more of a focal point, she suggested flip-flopping the home’s front and rear entrances, so that guests now enter via a winding path that leads through the fragrant courtyard. The new "front" door is set, unexpectedly, in a small turret that housed a spiral staircase in the original 1930s structure. "We wanted the house to have a quality of discovery about it," says Pursley. "It’s not a house that reveals everything in the façade and entry. You have to start using it, and then it really unfolds."

Inside, the kitchen was one of the first areas to receive a full face-lift. The space had been dim and cramped due to obtrusive cabinetry and a lack of windows. Now, light pours in from the custom single-pane corner window over the porcelain farm-style sink and reflects off the pale ivory limestone counters. Over the gourmet Wolf range is a gleaming stainless steel hood that was custom made by Mike McCoy, the same craftsman who retiled the roof in slate. To save space and make a statement, Pursley suggested recessing all the cabinets into the walls for spacious, but nearly invisible, storage. The doors, now flush with the walls, are covered in clay-colored leather that Angela found at a fabric closeout sale, and studded with decorative metal grommets. A doorway in the kitchen leads downstairs to a wood-lined basement wine cellar and a built-in office nook, Angela’s home base for keeping her family organized.

Steps away from the kitchen is a spacious, glass-enclosed salon with a barnwood beam ceiling and oversize French doors that open onto a Pennsylvania bluestone patio. The room was added to the house in the 1980s, so to help it blend in with the rest of the house and open it up, Pursley took down a wall and added floor-to-ceiling windows that showcase the backyard. The green embrace of the cultivated grounds makes the salon a perfect spot for warm-weather entertaining. Guests can meander in and out of the French doors, refilling drinks at the salon’s eye-catching bar, which is fashioned from a pair of eighteenth-century bookcases that originated in a European monastery. Angela found them at The Gilded Age Antiques in Banner Elk.

A new 1,000-square-foot addition houses Todd’s study on the first floor and a third bedroom for Lydia upstairs. The dark, almost gothic study is Todd’s private retreat, and it draws warmth from a cathedral-arched Pennsylvania bluestone fireplace surrounded by thick, molded-wood panels made of 100-plus-year-old reclaimed oak. Flanking the fireplace are two tall wingback chairs and a pair of handcrafted glass and iron cocktail tables designed by local artisan Randy Calhoun. Hidden doors were common in older European homes, and the study has two: one in the back corner that pushes away to reveal a closet, and one just outside the study, where a section of paneling gives way to a powder room.

In keeping with the period design, all the home’s interior walls were stripped down and hand plastered, just as they would have been 300 years ago. The hardwood floors upstairs and down were stained a deep black hue to contrast against the pale plaster. The effect is not only striking, but also a blank canvas upon which Angela could stamp her signature finishing touch.

Angela’s eye for treasure is her only background in design, but it’s all she needed. She bought her first piece, an antique console cabinet, at a flea market in Charlottesville, Virginia, when she was in college, and has had an unrelenting passion for all things moody, romantic, and old ever since. "I have always loved the heavy, dark, European-style furnishings, things with English, Scottish, and French influences," she says. She’d collected without pause in the eight years prior to the renovation, so she was armed with a house full of fabulous furnishings and accents, and in the rare instance when she didn’t have the perfect piece, she went out and found it.

That’s how a horseshoe-shaped antique beer table, originally made for dealing cards in a saloon, became a desk inside her snug office space in the turret. "We had assumed we’d have to get a desk custom built to fit the space, but I found this table when I was looking through an antique shop on vacation, and it fit perfectly," says Angela.

In the master bedroom, she converted an oversize piece of pale, ornately carved oak paneling that she bought from Architectural Antiques in South End into a dramatic headboard by staining it dark brown and mounting it behind the bed. The colorful rug beneath the bed is a Turkish Oushak from Nila’s Antique Rugs, also in South End. The rug, which dates to the 1800s, was showing its age when Angela found it. After owner Nila Nassi helped her ship it back to Turkey, where the brilliant gold, peach, rust, and orange threads were restored to their former vibrancy, the rug’s earthy palette became the anchor for the room’s décor.

Angela found similar inspiration for her daughters’ rooms in a pair of Turkish wedding shawls she spotted at Nila’s. She gave the vintage, embroidered linens new life as a large pillow on Anna’s bed, and as a headboard covering in Lydia’s room. Then she called upon interior designer Sandra Evans, owner of Antiques on Selwyn, to help her finish the rooms with flowing drapes and a complementary color scheme that add up to a sophisticated, whimsical look that will grow and mature along with her girls.

The Newnams moved back into their home in January 2007. "At first, I was worried about how it would all hold up in the presence of three young kids," says Angela. "But natural materials—wood, stone, plaster—age beautifully, so a knick or scratch on the floor just adds to the character." Despite her pleasure at withstanding the rigors of kids, dogs, and dinner parties, Angela’s most profound moment of success comes in the late hours, as the family retires to bed. "Each night that I walk down the hall into our master bedroom, I get the feeling that we really have been transported back 300 years," she says. "That is exactly how we wanted this house to feel."