As the newly minted Catawba Riverkeeper, David Merryman, twenty-five, has been given a lot more than just a cool job title. He also has the weight of our region's dwindling water supply on his shoulders. 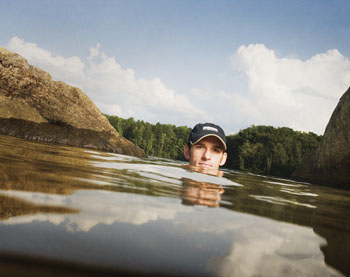 Merryman got his feet wet (pun intended) as Assistant Riverkeeper in 2006 and in April assumed the auspicious position of Riverkeeper from the departing Donna Lisenby.

His primary foe is the extreme level of development going on in the Catawba River Basin. According to Merryman, there are seventeen acres of land cleared every day in Mecklenburg County alone, and nearly 140 acres daily across the basin. With each new development comes the problem of polluted storm water with nowhere to run except into nearby streams and rivers. Added to that is the massive electricity needs of each newly developed area, which stretches the area's already-taxed water resources to their limit because of the amount of electricity required to pump the water.

Merryman is charged with the Herculean task of monitoring water quality in the river. Luckily he's not an army of one. In addition to the network of river, inlet, coastal, and creek “keepers” across the nation (and the world), Merryman is recruiting his own civilian forces to help monitor our region's water quality in a program dubbed Muddy Water Watch, which includes four informational training sessions and a site visit to practice in the field.

"The power to enact change really does lie with the citizens," he says, "and we want to make sure they know what their rights are." Merryman also stresses that you don't need training to make a difference. "Just cut one minute off your shower time. Nothing drastic. Every little bit helps."

This article appears in the October 2008 issue of Charlotte magazine.
Categories: Buzz > Spotlight
Contest of the Month