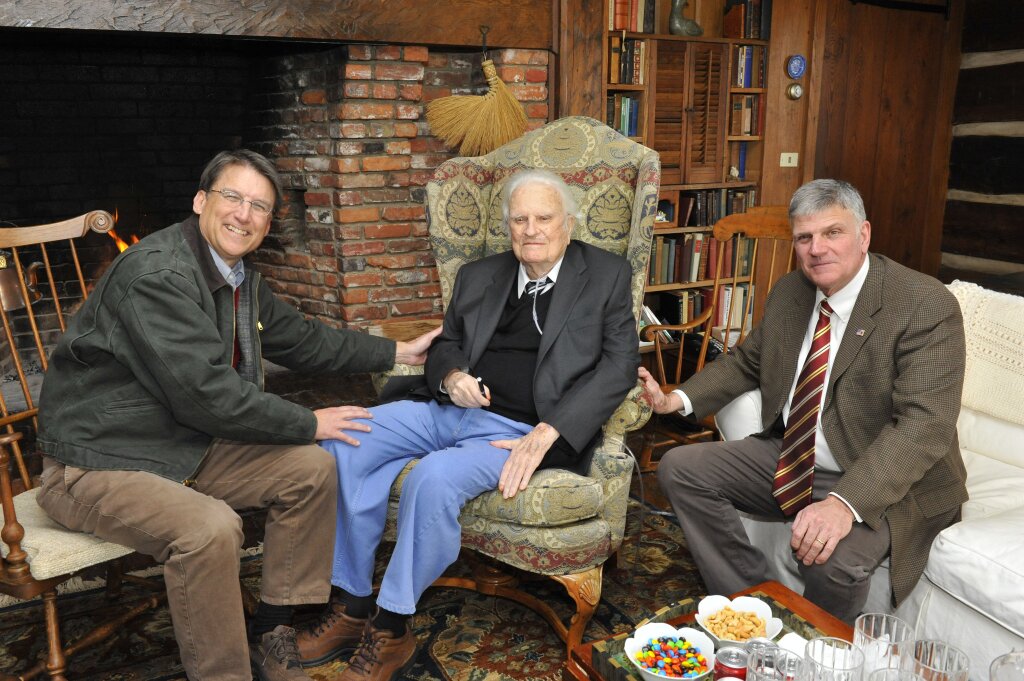 North Carolina Mayor Pat McCrory met with the Rev. Billy Graham on Friday at the preacher’s home in Montreat, and somebody took a picture of the two of them together with Graham’s son Franklin, because somehow this gives you some sort of political legitimacy that you can’t get from, say, meeting with a guy you think is Andy Griffith. But I digress. As the son of part-time wedding photographers, and as a man whose childhood consisted of having his mother pose him and his brother (“A little closer together, turn your head, smile, bigger, BIGGER”), I know a little bit about photographic composition. A few things to point out here:
1. There are flames coming out of Pat’s back. Interpret that how you will.
2. Rev. Billy Graham appears to be holding an e-cigarette in his right hand in a classic Bob Dole pose.
3. The governor is wearing his I-Just-Filmed-A-Campaign-Ad-In-An-Empty-Warehouse Carhartt jacket. Either he's a man of the people, or he shot a bear from a four-wheeler right after this photo op.
4. There are M&M’s on the table. And peanuts. No Chick-Fil-A.
5. Scoot your chair just a little closer to the preacher, governor.
6. The governor is touching his knee. And his elbow. And he’s sitting way too far away from him. I call this pose “guarded intimacy.”
7. You could totally photoshop in a giant check and make it look like Pat McCrory and Franklin Graham are presenting one of America’s greatest evangelists with his Powerball winnings. THAT would be a story.
—
State lawmakers are trying to name Billy Graham as North Carolina’s Favorite Son. They’ve tried and failed three times before. Tough crowd in Raleigh.
Jim Bakker was back in Fort Mill to broadcast his television show from his old Heritage USA digs. If you wonder what Jim Bakker has been up to lately, let the Fort Mill Times sum things up in one sentence: “In addition to his religious message, Bakker’s current ministry also focuses on selling products, including vitamins, “Bread of Life,” and Jim’s Favorite Soynut Butter.”
Jake Delhomme bought a race horse a while back, and now that he’s sold it, it’s a 50-1 shot to win the Kentucky Derby. It is what it is.
Mike Tyson cancelled his one-man show in Charlotte because not that many people actually want to sit through a one-man show featuring Mike Tyson.
Michael Jordan: Today’s Bobcats owner, tomorrow's Maury fodder.
Jimmie Johnson has never peed in his race car, because eew that’s so, I mean, GROSS. (Dale Jr. totally has). http://www.wcnc.com/sports/What-is-the-most-annoying-question-for-Jimmie-Johnson-194173831.html
The DNC dines and dashes on Duke Energy’s tab.
Yeah, Dennis Rodman went to North Korea and met Kim Jong-un. You know who’s already been to the North? In 1995? Ric Flair. That almost makes as much sense as Dennis Rodman meeting– oh wait, both of those things actually happened.
Categories: Blog Links > Week in Inanity, The Buzz, Way Out