The Week's Inanity, Dec. 7: In which we go deep on Richard Marx

It must be really hard to be Richard Marx, because no matter where he is, he’s probably always having people walking up to him saying “I will be right here waiting for you.”  Because ha! That’s so clever! I’ll bet he never heard that one before. Or this one:

Note: That would probably work best at night. 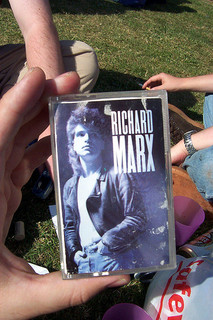 And then, I guarantee you, that same guy probably says “Oh man, you must get tired of hearing that,” which immediately causes Richard Marx to die a little bit more inside.

Sing us a song, you’re the piano man, they say. And inside, in a softly weeping voice, Billy Joel must just be saying to himself “I am. I am.”

There's more. A few days ago, presumably boarding a plane to Charlotte, he tweeted this:

Richard Marx just dropped a clever line, and then he swore. This is just like that scene in Jerry McGuire where Tom Cruise tells Jonathan Lipnicki that the f–kin’ zoo’s closed.

A couple of years ago, I went to go see Edwin McCain at the Neighborhood Theater in NoDa, where he made a habit of performing on Thanksgiving. And I was a little embarrassed, because I didn’t want anybody I knew to see me slinking into an Edwin McCain concert. I mean, the guy sang I’ll Be, which is the least awesome thing you can blast at high volume from your Chevy Cavalier.

And I was so wrong about Edwin McCain. He was great. He was funny. He had everybody cracking up. And he played music that wasn’t sappy.

He did close with I’ll Be. But by that time I had just accepted it and sang along. Screw you, Edwin McCain, for buttering me up.

Anyway, if you didn’t see Richard Marx last night at the McGlohon Theater, he’s on QVC today apparently after leaving Charlotte in a hurry this morning:

Charlotte! You guys were cool! Thanks for coming out tonight. Early, early flight so…Dick Out. xo

South Carolina Politics, sometimes I love you so much, it hurts.

I thought Ben Gordon was the goat until I saw the women he left the arena with. Wow. Now this is the NBA we all know and love