The Wisdom of Solomon

First, Charlotte’s Eric Solomon discovers great wines. Then, he imports them for us to drink 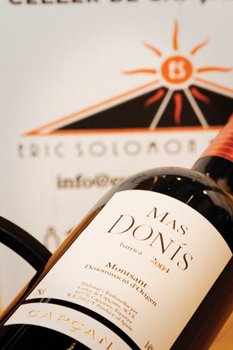 Importer Eric Solomon has a magic touch when it comes to finding special wines overseas. The Wine Shop Park Road has an entire table devoted to his selections. – Chris Edwards

I spend a lot of time pushing shopping carts around wine stores. I treat these shops the same way I do bookstores. I browse the shelves and look at almost every bottle, always looking for something original. I have discovered many underrated, obscure wines that open up new windows.

Wine shops can be overwhelming, though, with all the labels and stupid quotes or scores from experts that never really tell you anything honest about what’s in the bottle. Through trial and error, I’ve learned to put trust in certain distributors and importers. Names like Robert Kacher, who found a niche in neglected regions of Southern France, and Terry Theise, who scours the German countryside. Their name on a bottle is like a personal recommendation and a guarantee of superior quality.

For the past couple of years I have found myself gravitating toward an importer named Eric Solomon. He imports wines from France, Portugal, and Spain. I have written about his wines many times in this column, even gushed about Castano’s entire line, especially the Solanera Yecla Vinas Viejas reds, the Hecula (heck yeah!) Monastrell, and the Burgans Albarino from Galicia, Spain. These wines are superior in quality compared to anything in their price range. They stand out like Lalique at a garage sale.

It turns out Solomon lives in Charlotte, but his reputation is golden worldwide. Robert Parker, the Dalai Lama of wine critics, picked him as a promising wine importer back in 1995—along with Kacher and Theise. Recently, a wine in Solomon’s portfolio, the 2004 Clos Erasmus from Priortat Spain, received 100 points from Parker’s The Wine Advocate. A perfect score from Parker is rare. I’ve tasted it, and it’s a masterpiece that you can linger over for hours, with fruits that evolve from ripe plums into Christmas cake. You can find it online for $200-$300.

I visited Solomon at his office, a 1920s bungalow on East Seventh Street near Pecan. I expected him to be a paunchy, graying, bald guy with a big red nose and ruddy checks wearing half glasses, but that was just my reflection in the window. Solomon is youthful and fit, with the tall, erect posture and polite smile of a professional ballroom dancer. He spent his childhood bouncing around the country following his parents’ careers as clinical psychologists. His early years were spent in North Carolina. He traveled to London as a music student in the late 1970s, where he was selected as the apprentice to the principal percussionist of the London Symphony. He worked at a wine bar to support himself, and was included in the tastings, where his employers noticed that he had a gifted palate. They sponsored him—an American, the first and youngest—to attend the prestigious Master of Wine program at Britain’s Wine and Spirit Education Trust. “I passed the boot camp,” he says, “which was a brutal practical tasting of wine varietals.”

In 1979 he came back to the states and worked with Heublein/Smirnoff as its French wine expert, gaining a reputation for finding great wines in the Rhone region. “Of course, everybody looked brilliant in the 1980s,” he jokes. But at the time Rhones were a difficult sell in America. He found many excellent wineries in regions of France that were just not safe enough for his corporate bosses. So in 1989, he quit his job, took his 401(k) money, and started European Cellars. He scoured untapped areas like Languedoc-Roussillon and the Rhone, always on the road, shuttling back and forth across the Atlantic. One night in the early 1990s, he was sitting in his New York office and noticed that while he was on the wine trail a pile of wine samples had accumulated.

“It was wall-to-wall samples from the wine world. These people had taken the time and money to send out a 750-milliliter bottle to me, so I figured I owed them a taste. I just started attacking them—all eighty. I pulled the cork on one bottle that literally just stopped me.” It also changed his life. It was a 1990 Clos Erasmus. At first he thought it was French, but then was intrigued to realize it was Spanish. He had no idea that Spain was capable of such high standards. “I tried to track down Daphne [winemaker Daphne Glorian], but she was off hiking in South America.” They met two years later, he added Clos Erasmus to his portfolio, and then he married Glorian in 1997.

Wine importing is a risky business. Solomon’s success is due to careful control and oversight of every detail, from wine selection to growing techniques, harvest, winemaking, and shipping. He selects wines only after he visits the winery for barrel tastings. “I never take a taste from a bottle because small miracles—which can’t be duplicated—sometimes happen in a bottle.”

There is a lot that can go wrong once the wine leaves the winery, as it travels first by truck to the port and then on a ship across the ocean. “We are control freaks,” Solomon says. He makes sure every vehicle and container that the wine is shipped in is kept at a constant fifty-five degrees. For insurance, each case has a sensor inside that records any aberrant temperature fluctuations.

Still, he understands that great wine must come from great grapes. He tells stories of the early 1990s when Spain was still suffering from low self-esteem, a malaise left over from thirty-five years under the fascist rule of Franco. The government encouraged vineyards to produce as much wine as possible, emphasizing quantity over quality. Those years ruined the reputation of the Spanish wine industry. A lot of work has gone into resurrecting old vineyards and using modern techniques to increase the quality of the harvest. Things as simple as thinning the vines before harvest, so that the remaining grapes become more concentrated. The Spanish weren’t easy to convince, though. “I remember workers following behind us gathering all the fruit we dropped,” Solomon says, “so they could take it home and make their own wine from it.”

Solomon is also playing a major role in conserving old indigenous grape varieties, exotic names like Airen, Albarino, Bobal, Godello, Loureiro, Macebo, Mencia, Treixadura, and Xarello, which thrive in the Spanish climate. The trend has been to rip them out and replace them with Chardonnay, Merlot, or Cabernet Sauvignon. He has encouraged his growers to keep the old vines and is now offering some amazing wines from these indigenous grapes.

On the wall next to Solomon’s desk is a large color photo of a steep, arid landscape planted with small, stunted, struggling grapevines. He points to it. “I call this the golden triangle. It’s where Alicante, Jumilla, and Yecla meet.” It’s his vineyard. Smart guy. I’m very jealous. My favorite wines come from this region—wines that my seventeen-year-old wine book wrote off as “bruisers, earthy, over strong, blending wines.” Eric Solomon found something else.

Wine of the Month

1994 Mas Donis
Barrica, Monstant,
Capcanes, Spain
Eighty-five percent Garnacha and 15 percent Syrah. This wine has a healthy deep purple color. The aromas of spicy red berries rise from the glass in waves of heat. The fruits are blackberry and raspberry with cherry undertones. It has a good, clean, long finish, with well-behaved tannins. This wine is an excellent value that could go toe to toe in a blind taste test with wines of twice, no, three times the price. $13 at Winestore, Total Wine, and The Wine Shop Park Road.

2006 Ercavio Mas que Vinos Blanco Made from 100 percent Airen, a grape indigenous to Spain that tastes similar to Sauvignon Blanc. This wine has a clear color and steely citrus aromas. The fruit has hints of lime and apple. Very dry, makes your mouth water. An excellent wine. $9.50 at Total Wine

2006 Domaine LaFage “Cote D’Est” Vin de Pay de Cotes Catalanes, France A blend of Grenache Blanc, Chardonnay, and Muscat. A honey-hued beauty, with aromas of fresh melon and whiffs of Muscat. The fruit is a pleasing blend of honey and melons, with orange-blossom undertones. This is a lovely, elegant wine—like nectar. Worth every penny. $9 at Winestore.

2003 Pintas Vinho Tinto Douro, Portugal Deep ruby color. Berry aromas. Red berries: raspberry, blackberry, and strawberry. This is a good, clean wine with an excellent backbone. Lighter, less tannins than Spanish wines. Portugal is still an area emerging into the international wine scene. This one is made from two dozen varietals, all indigenous to Portugal. They were crushed by foot in stone troughs. Keep an eye on Portugal. $60 at Winestore.

2003 AALTO P.S. Ribera del Duero, Spain 100 percent Tinto Fino, which is Tempranillo. This wine shows similar characteristics to the Clos Erasmus with a clear, deep garnet color, an orange spice aroma, and allspice. The fruit is floral with hints of licorice and molasses. Like a Christmas bread. A very interesting wine, and delicious. $115 at Winestore.

2004 Mas Doix Priorat, Spain Fifty percent Carinena, 48 percent Garnacha, and 2 percent Merlot. This wine is an inky purple. It bursts from the glass with big plum and slight blueberry aromas. It has a fruit to wallow in all day long with fresh raspberry, slight cherry—but never sweet, in fact a good controlled tartness. It’s backed by big tannins and after flavors of pepper and tobacco. I love this wine. It is my favorite in Solomon’s portfolio. $120 at Winestore.

This article appears in the September 2007 issue of Charlotte magazine.
Categories: Uncorked
Contest of the Month