Reminiscent of Charleston, but with more shopping and international flair, Washington D.C.'s Georgetown makes for a great getaway 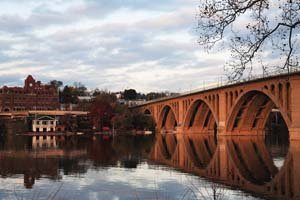 Georgetown is the smaller, more quaint part of D.C. chock full of eclectic shops, upscale boutiques, and tiny side streets.

A mile from the White House, Pennsylvania Avenue ends at M Street. The massive public buildings, the monuments, and the museums disappear, yielding to an outlying town first settled by Europeans in the 1600s when the nation's capital was nothing more than wetlands along a river. Exclusive, trendy, and dominated by students as much as diplomats, Georgetown is still distinguished by historic houses, small shops, and locally owned restaurants. No Metro comes through, and parking spaces are hard to find, so the town retains a tight sense of identity. On a recent Sunday morning, I was seated upstairs in a packed Belgian restaurant famous for its bakery and its communal table.

We had ordered the organic baker's basket at Le Pain Quotidien; it arrived long before salads and omelets, giving us a chance to sample at our leisure. Sunlight streamed in the tall windows at the end of the room, warming the exposed brick wall and falling across the faces of strangers seated to our right and to our left; we were squarely in the middle of the large communal table that dominated the room. In the basket were slabs of sourdough bread, crispy flutes, slices of baguette, and hearty chunks of a walnut loaf, all made on the premises of this popular chain restaurant that has swept through Europe. To complicate matters, a waiter had placed a condiment rack in front of us. Jars of marmalade competed with Brunette, a peanut-butter-style spread of ground hazelnuts. Thick and sweet, it was becoming impossible to resist, especially for my son and his wife, who were sipping double-strength hot chocolate out of white bowls. The combination of nuts and chocolate was creating a candy bar buzz.

We were in Georgetown, visiting the newlyweds, who were camping out in a sublet in Washington as they searched for their first real home. They'd recently discovered this classical haven tucked into a bend in the Potomac, and we had come up for the weekend to explore together on foot. My husband and I were staying at the Washington Plaza Hotel, a 1960s standard farther down M Street at Thomas Circle. We already had a good feeling about the day. When we woke up, we looked out of our wide window high above the circle to see National City Christian Church standing like a Greek temple in the early morning light. Far below, members of the congregation were handing out coffee to people walking by, striking up conversations. A statue of Martin Luther leaned toward the circle in expectation. We were leaning in that direction, too.

After breakfast and plenty of coffee, we headed downstairs past the pastries, through the crowd waiting to be seated, and out to M Street. It was packed with boutiques and high-end chains, including familiar Charlotte names like Dean & DeLuca and J. McLaughlin. My daughter-in-law showed me her favorite store, Paper Source, which I'd discovered online while searching for rehearsal dinner invitations. I had no idea it was an actual store. Inside, there were rolls of embroidered wrapping paper and shelves decorated with paper flowers. It was easy to understand why this two-story ribbon-festooned shop had become one of her favorites. Along Wisconsin Avenue we saw Prada sportswear, Coach sneakers, Diesel jeans, and electric Betsey Johnson minidresses. Home furnishing stores were scattered along the avenue—wonderful, small boutiques—and the bigger names, like Baker Furniture, were clustered near the canal along Cady's Alley.

Leaving M Street, we walked up the little side streets and along the back lanes—I was reminded of Charleston when I saw the pristine rows of historic townhouses, the herringbone brick sidewalks, and the compact front yards with boxwood parterres. Solid front doors had heavy knockers, and urns were crammed with greenery; there were little iron gates and window panes of antique rippled glass. Like Charleston, Georgetown is on a river—in this case, the Potomac—and it has the same rich, historic feel of a town that grew wealthy on centuries of trade. It also has a youthful infusion, as Charleston does from the College of Charleston, because of Georgetown University. We walked past lots of other young adults with their sightseeing parents, enjoying the Sunday afternoon as we were. Sidewalks had a steady stream of college students in jeans, people walking their dogs or pushing their kids in strollers, and plenty of distinguished types from the neighborhood homes. Faces were diverse, which was reflected in the layers of restaurants, taverns, and bistros. You could get Argentine gelato, Philadelphia cheese steaks, Vietnamese spring rolls, German schnitzel, and American Angus burgers. With no Metro stop coming through, the town felt insulated, as though it were just a fancy college town, even though senators, diplomats, and congressmen were living and working all around us.

The kids had fallen in love with the gardens at Dumbarton Oaks, a private estate filled with art that is now managed by Harvard University. Walking up a quiet street, I asked my son if he remembered that I took him there in 1995. "No, Mom, I don't." I sighed. Back then, our family was going through a divorce; maybe big chunks of memories got lost, the bad ones taking the good ones with them. I was glad he had rediscovered the garden—the new memory would be all his own. Dumbarton Oaks has ten acres of garden rooms featuring calligraphy-like paths, hillsides with cherry trees, a perfectly elliptical pond, and banks of flowers stitched like crewelwork along stone walls. Built a few decades after the American Revolution, the house also has a magical orangery adjoining it. Once used as a greenhouse during winter, its interior walls are draped in a vine planted in the 1860s—its massive limbs hang like braids and curtains around the Palladian windows.

After walking up a street to see a pretty condo they had decided not to buy, we came to the Duke Ellington School of the Arts in a part of Georgetown that was a little worn and frayed. On the hill in front of the school was an enormous bright green Adirondack chair. It seemed big enough for Gulliver, and nearly new, in contrast to the shabby building. I don't know what came over us, but before we knew it, we were walking up the hill. Each of us made a narrow climb up the slope of the back leg, ducked under the flat arm, and a moment later we were perched on the seat's edge, swinging our legs. The chair was just the right size for Edith Ann, a character comedienne Lily Tomlin created for the old television show Laugh-In. Tomlin would dress up as a five-year-old and sit in a giant rocking chair, telling stories. The child in us had to climb up there and find out what it was like.

Sitting together in the big chair, we felt like a family on holiday. We talked about Georgetown, and about other condos they had considered buying, including one in the historic district in the lower level of a townhouse. I thought about the stories I had heard throughout the day, about restaurants, their jobs, the pros and cons of different commutes, the dogs, and new friends. Sitting in this oversize lawn chair in a deserted schoolyard, I was struck by a gift. Our day began at a communal table and was now drawing to a close in a chair big enough for everyone. I didn't know if my son and his wife would end up in Georgetown, but one thought reassured me. There were enough seats in this town for all of us to sit together.

This article appears in the May 2008 issue of Charlotte magazine.
Contest of the Month