AS THE YEAR comes to a close, it’s once again time to take a look back at how our cultural sector evolved this year. It’s been a year of transition for Charlotte’s museums. Leaders are coming and going, as new initiatives are launched. Our arts accountability series began with a look at one institution, in particular, and continues to track these shifts. Elsewhere, local music was bolstered by a new program from Center City Partners, as Charlotte’s biggest theater program marked its anniversary. Read more about all of the arts’ biggest moments, in no particular order, below:

1. "In Focus/Enfoque” Unites Museums and Galleries 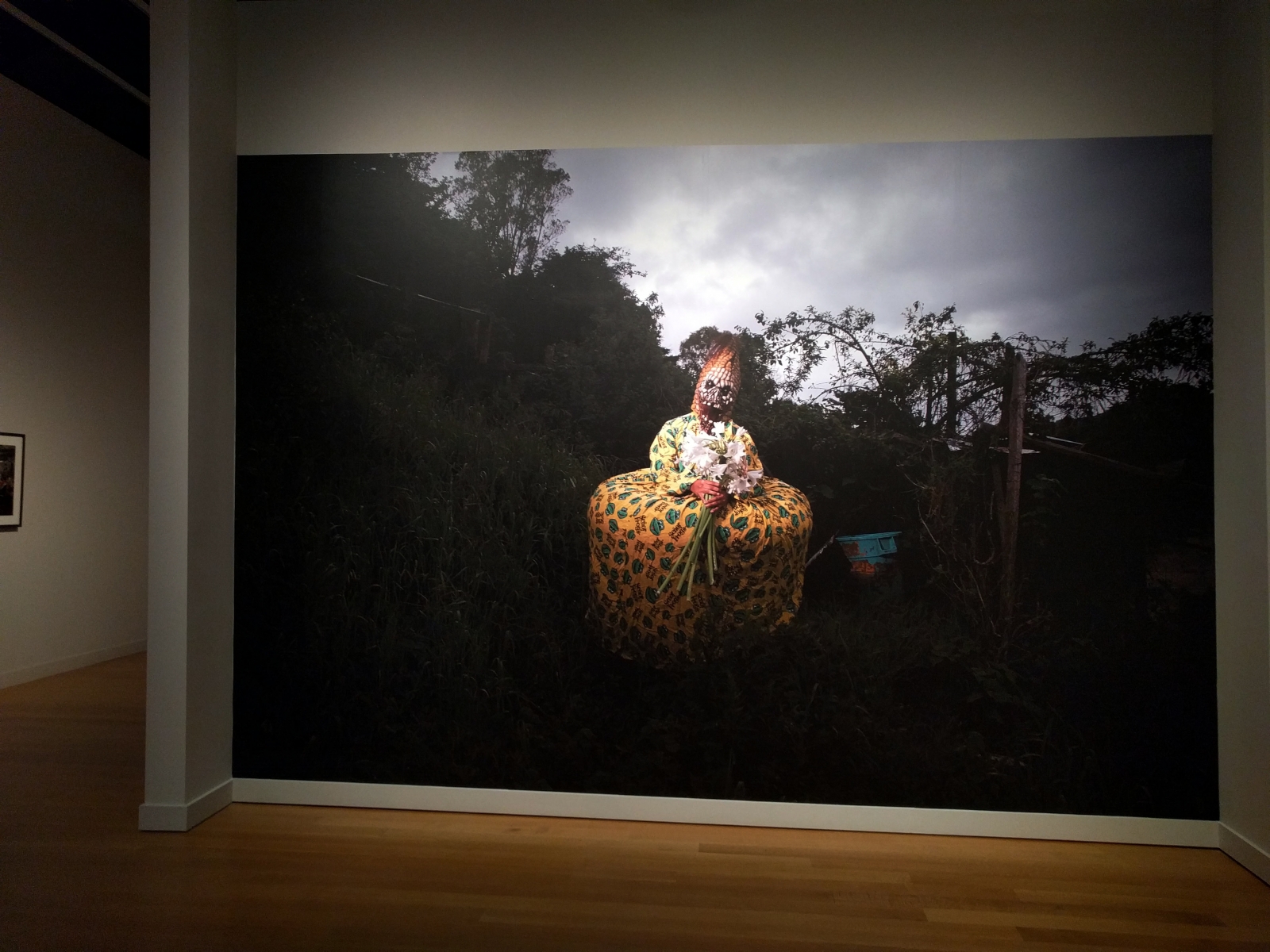 The “In Focus/Enfoque” project was an idea envisioned by Allen Blevins, director of global art and heritage programs for Bank of America. The anchor exhibition of the citywide effort is Mint Museum Uptown's Develar y Detonar (Reveal and Detonate), a survey of contemporary Mexican photography. “In Focus/Enfoque” extends across and beyond uptown, with Bechtler Museum of Modern Art, New Gallery, SOCO Gallery, the McColl Center for Art + Innovation, The Light Factory, and Laca Projects also participating and exploring Mexican photography in each’s own sensibility. Hopefully, this groundbreaking collaboration sets the stage for the future ones in Charlotte. (Look for a deeper dive into this project in an upcoming issue of the magazine.)

> Other notable exhibitions: State of the Art at Mint Museum Uptown, Christopher Clamp’s Stories in Stillness at Jerald Melberg Gallery, and Maja Godlewska’s The Ultimate Landscape at New Gallery.

2. Charlotte at the Tony Awards 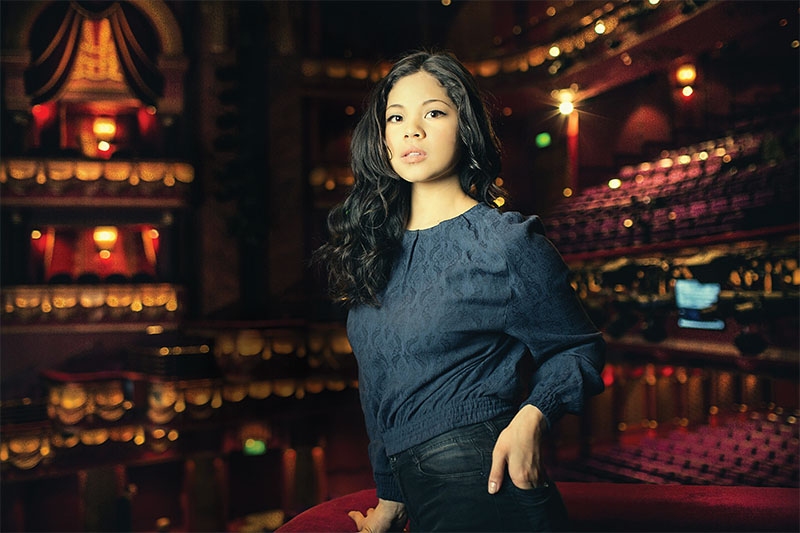 Charlotte native Eva Noblezada, a one-time Northwest School of the Arts student and Blumey award-winner, first left home to star in Miss Saigon in London's West End. The production moved to Broadway, and as a result, the 21-year-old found herself up against Bette Midler at the 2017 Tony Awards in the category of “Best Actress.” It was an enormous moment not only for Charlotte theater, but represented a case study for what happens when the city’s youth have a chance to grow and develop interest in the arts. 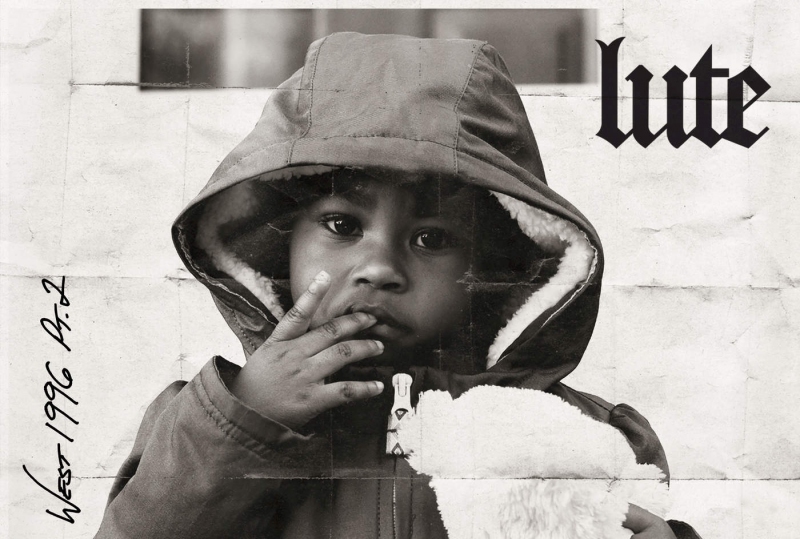 Local musicians churned out some outstanding releases this year, from jazz artist Harvey Cummings to indie rock act Junior Astronomers. But for us, it was hip-hop artist Lute that made the year’s definitive statement in the much-anticipated West1996 pt. 2, released through J. Cole’s Dreamville label.

> Read our entire review of the record—and watch the music video for the single "Morning Shift"—on our site here. 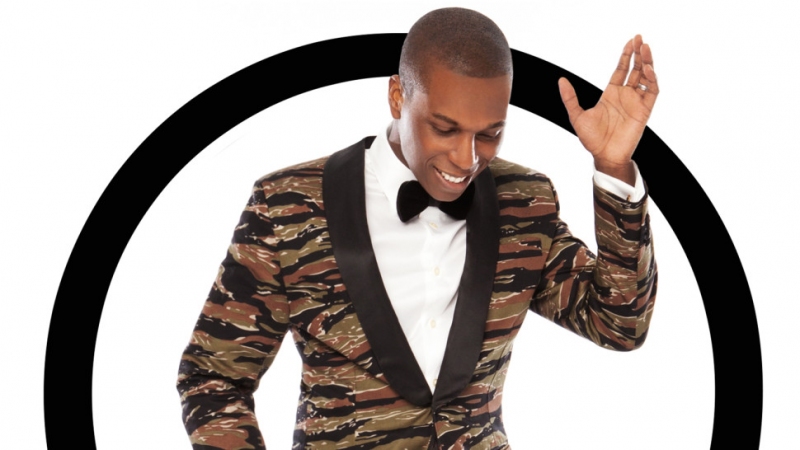 After that initial 2016 announcement of Hamilton’s run in Charlotte, the wait for the beloved musical to hit uptown felt glacial. That is, until Leslie Odom, who originated the Aaron Burr role on Broadway, opened the 25th season for Blumenthal Performing Arts with a concert to celebrate the group. Odom’s riveting show kicked off biggest-ever season for Blumenthal, which will end with Hamilton’s run in the fall of 2018. And Blumenthal isn’t stopping there: They’ve already announced that Dear Evan Hansen, a more recent addition to the field’s new golden era, is also on the way in an upcoming season. 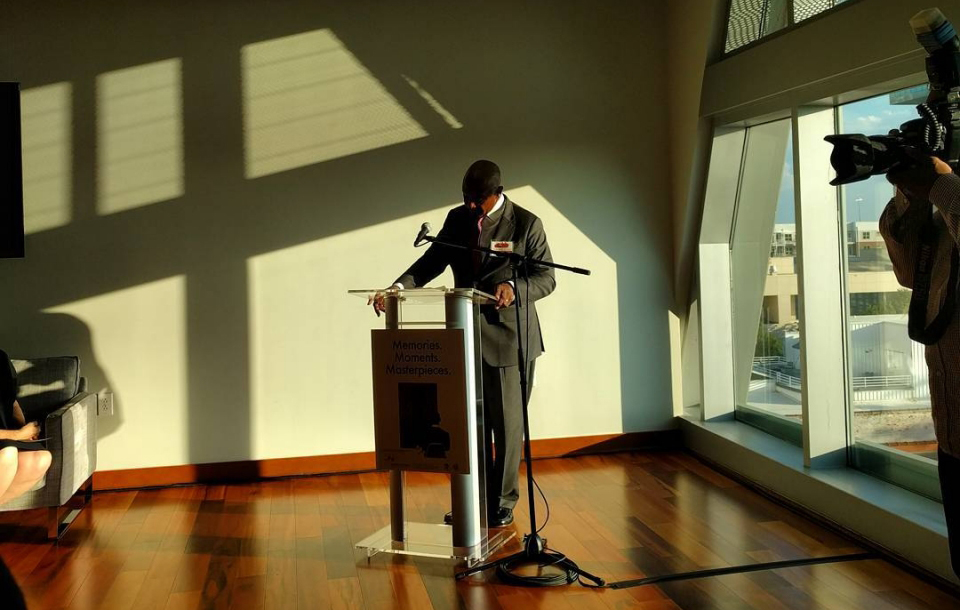 Over the past year, the Harvey B. Gantt Center for African-American Arts + Culture’s strong string of exhibitions displayed a potential that needs real investment. Harvey Gantt and Hugh McColl stepped in, unveiling a $10 million endowment for the museum to invest in programming for exhibitions and education. I’m hoping they also use the momentum to find someone to fill the enormous hole left by creative director Jessica Moss, who managed to inject an infectious energy into the museum before exiting earlier this year.

> The Gantt and the Bechtler participated in Charlotte's version of the Inside|Out project. Read more about that here. 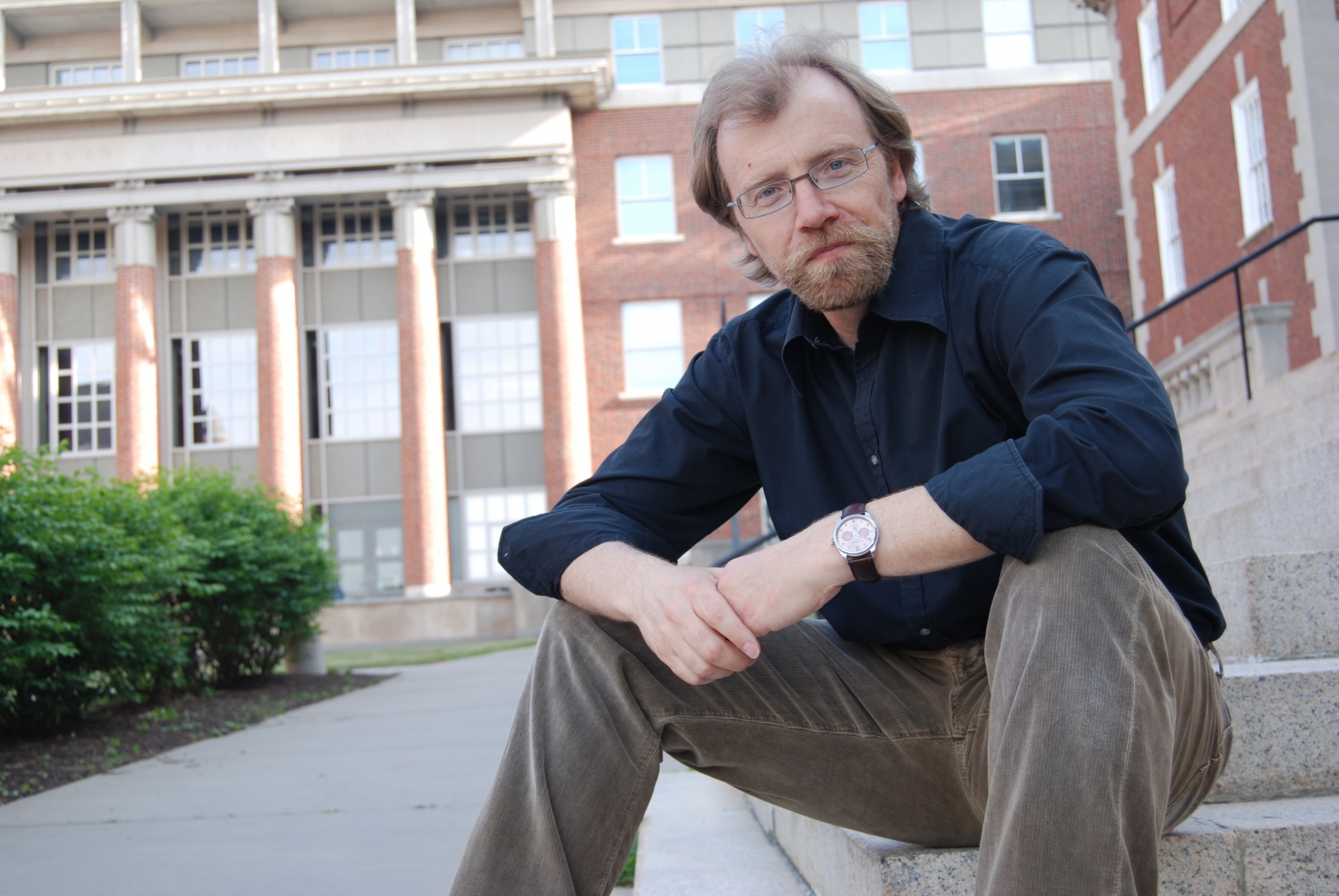 Central Piedmont Community College’s literary/arts festival has a history of big names. (In the 2018 edition of Sensoria, new U.S. Poet Laureate Tracy K. Smith visits.) This year, author and MacArthur George Saunders visited the Elizabeth campus fresh off his lauded first novel Lincoln in the Bardo. He offered two talks: one on his kindness, stemming from his popular presentations on the topic, and a reading and discussion of the new book. Both offered rare experiences for both CPCC students and the entire city. 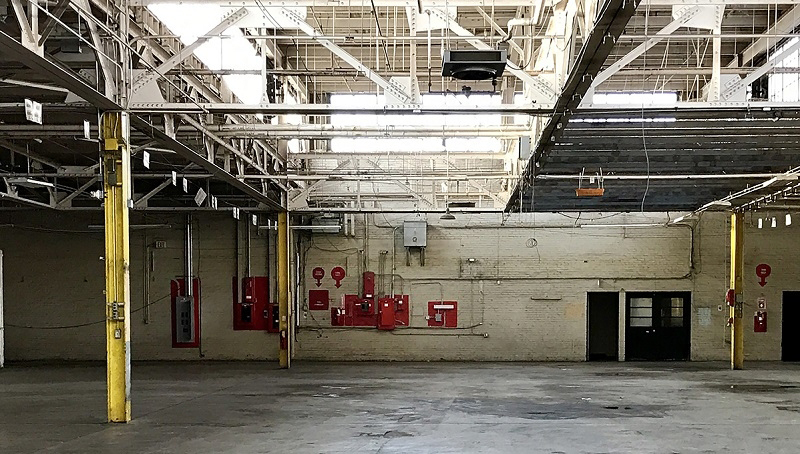 The buzz around Camp North End soared when Goodyear Arts announced it’d be heading there for (at least) a three-year stint. The arts collective and residency project continues to evolve—and maintains its placement as the epicenter of excitement and potential in Charlotte arts. The addition of Black Market and DUPP&SWAT show a strong curatorial sensibility at the site, and its entire 75-acre development will be the place to watch in 2018. 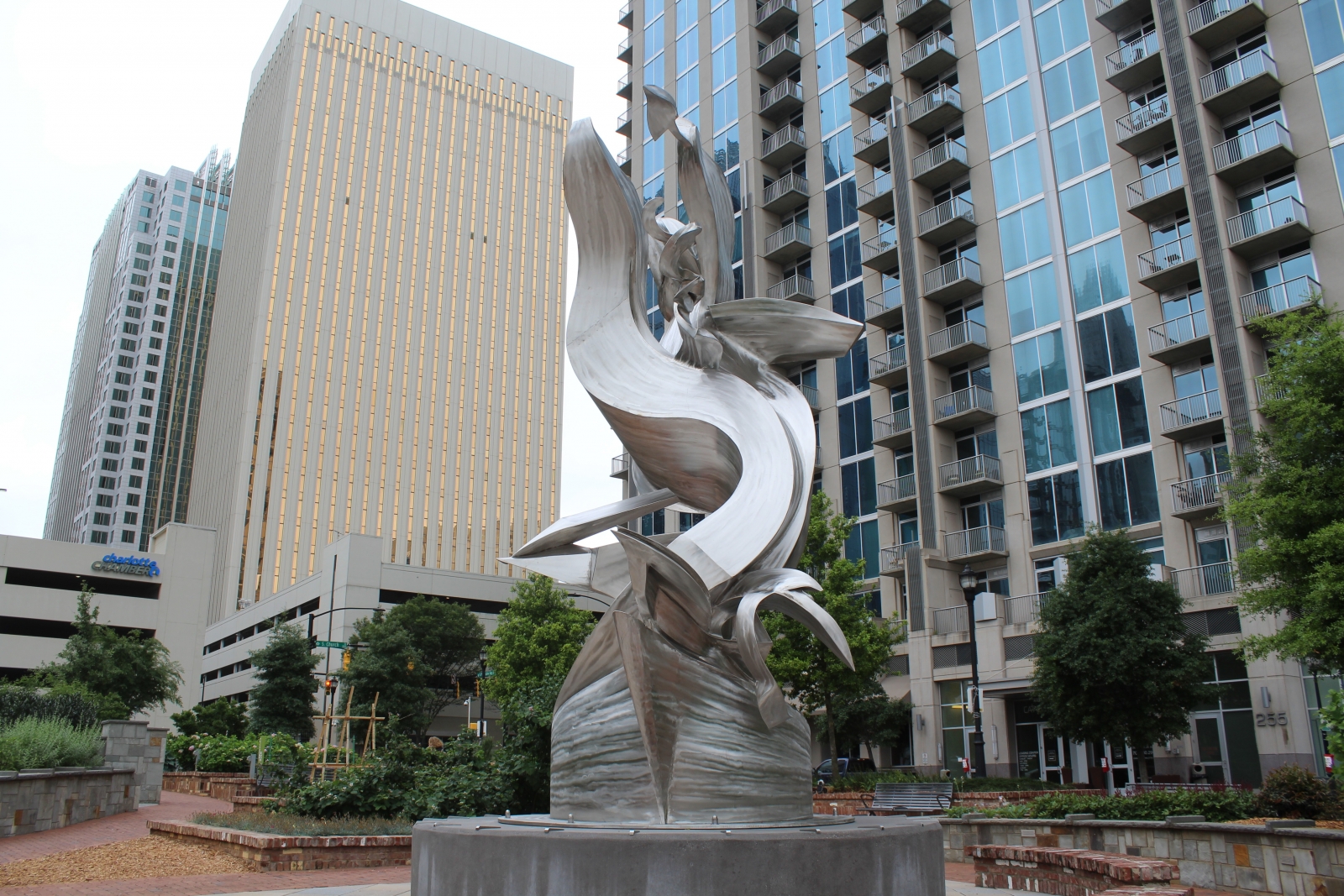 Charlotte added yet another impressive piece to its public art portfolio with Richard Hunt’s towering “Spiral Odyssey” at Romare Bearden Park, a tribute to the spot’s namesake. The stainless steel piece carries a historical significance: In 1971, Hunt and Bearden were the first African-Americans to have solo exhibitions at the Museum of Modern Art in New York.

> We have our own public art scavenger hunt in the "25 Things Every Charlotte Family Must Do" list, released in August.

9. That Stella Artois Mural in NoDa 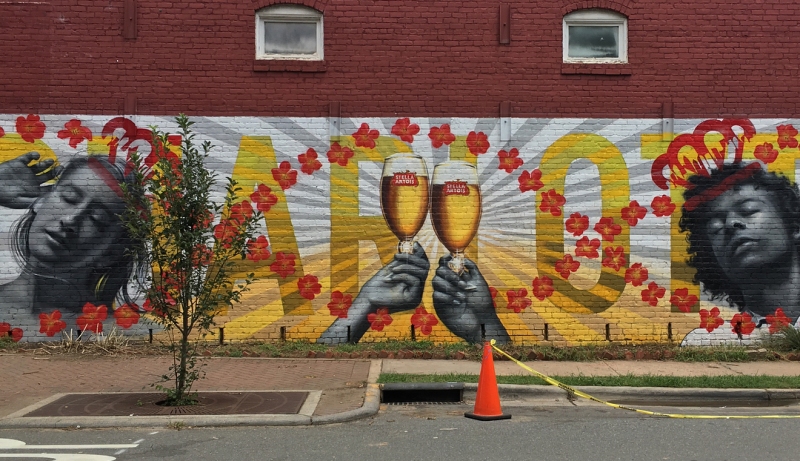 For some, this situation may have seemed like just another social media argument. But I think the debates that stewed around Osiris Rain’s corporately funded mural in NoDa was a step in the right direction for how we talk about art in this city. Folks seem to get so protective about craft beer and The Man’s targeting of locally grown businesses. Hopefully, a few people in the discussion were able to contemplate, perhaps for the first time, how little artists are protected from corporate pressures themselves. 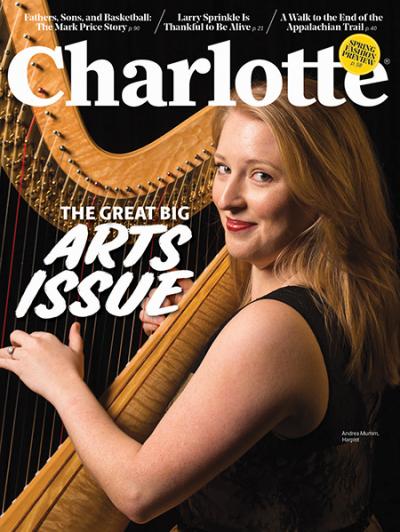 I saved this one for last, because it’s the most self-promotional. But as someone who has been covering the Charlotte arts scene since 2013, there was no bigger moment for me personally than being able to edit and unveil the magazine’s Great, Big Arts Issue. The hope is that we were able to capture an honest picture of where the cultural sector stands: the good and the bad, the accomplishments and the shortfalls. One day, I hope to edit an issue that shows how we conquered the latter.

This article appears in the January 2018 issue of Charlotte magazine.
Categories: Arts + Culture