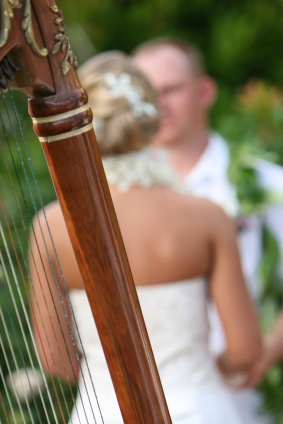 What do a steel drum player, a DJ, and a string quartet have in common? They’re the perfect entertainment for your wedding reception, of course. With all the focus on finding the perfect dress, choosing the right cake, and getting the right ring for you and your Mr. Right, one of the most important aspects of your wedding day often gets done last: booking the entertainment.   While the dress and cake are nice to look at for one evening, many people will remember the fun they had at the reception—not the type of flowers in your bouquet.


Click the song names to listen.
By: Victoria Uwumarogie

Nate Brown: I just did a wedding and I did ‘Killing Me Softly,’ Roberta Flack’s version for them to walk down the aisle. It’s how you play it, the style of the song that matters. I can slow it down and change the rhythm and make it more of a ballad. It’s more of how you present the song.

Carolina Strings: We often use Pachelbel’s ‘Canon D.’ It’s probably the very most popular thing that people ask for. Hands down that’s the most requested.

Also recommended:
‘Because You Loved Me’ by Celine Dion.
‘Endless Love’ by Lionel Ritchie featuring Diana Ross
‘When You Say Nothing at All’ by Ronan Keating

Todd Alexander: “A lot of people do Jack Johnson’s ‘Better Together,’ but you can really go anywhere with that one. The wedding march is still popular though. Nobody really does the traditional when it comes to the bride and groom.”

Also recommended:
‘I Can See Clearly Now’ by Johnny Nash
‘Walking on Sunshine’ by Katrina and the Waves
‘Beautiful Day’ by U2

For the … Introduction at Your Reception

Carolina Strings: “After the planning is done and the wedding is complete, then the happy couple can breathe a sigh of relief as they enjoy their first moments as Mr. and Mrs. So, a calm and quiet opening with special meaning is Etta James’s ‘At Last.’ ”

Also recommended:
‘I Gotta Feeling’ by Black Eyed Peas
‘Sign, Sealed, Delivered’ by Stevie Wonder
‘All You Need is Love’ by The Beatles

For the … First Dance

Nate Brown: “I use calypso (a form of Afro-Caribbean music), like Willie Colón. He wrote a song “Che Che Cole.” I use something up-tempo. But my most requested song is Eric Clapton’s “Wonderful Tonight.”The lyrics of the song just tell of how lucky he is to have his wife.”

For the … Father-Daughter Dance

Todd Alexander: “My all time favorite is the Mill Brothers’ ‘Daddy’s Little Girl.’ It’s the words. It goes through all the fairy tale kind of stuff, all the ‘through the end of the rainbow’ type of love stuff. Heartland’s “I Loved Her First” is a very close second. It’s a country song.”

Also recommended:
‘Just the Way You Are’ by Billie Joel
‘Through the Years’ by Kenny Rogers
'Dance With My Father’ by Luther Vandross

For the … Mother-Son Dance

Todd Alexander: “Backstreet Boys, ‘The Perfect Fan.’You got to get past the Backstreet Boys thing. When I tell grooms, I’m like, just get past who it is. I had a mother two weeks ago who was in tears listening to the lyrics. Nine times out ten, when we give recommendations they choose the song.”

Also recommended:
‘A Song for Mama’ by Boyz II Men
‘Always’ by Irving Berlin
‘What a Wonderful World’ by Louis Armstrong

For the … Bouquet Toss

Carolina Strings: “ ‘Shout’ by the Temptations. It’s happy, fun music, familiar, and upbeat, great to keep the party going. And the words direct everyone to throw their hands up, which is a perfect idea for those who are trying to catch the bouquet!”

For the … Garter Removal & Toss

For the … Last Dance

Nate Brown: “I would say Peter Frampton’s ‘Baby I Love Your Way,’ or oddly enough, a song by the Righteous Brothers called ‘You’ve Lost that Loving Feeling.’ If they want something fast paced I would play ‘Day-O (The Banana Boat Song).’ ”

Also recommended:
‘Time of Your Life’ by Green Day
‘Don’t Stop Believing’ by Journey‘Save the Best For Last’ by Vanessa Williams