TRAVEL: An Encounter With the Elk of Great Smoky Mountains National Park

The park is a safe space for about 200 of them, including a 1,000-pound bull who prefers his trailside naps undisturbed

The man whose job it is to enforce safe distance between humans and elk offers advice: The best way for me and my dog to avoid the 1,000-pound bull elk that reclines peacefully in trailside brush some 100 feet ahead is to detour to the riverbank on my right, hug the river as we creep upstream, then cut through the brush beyond the elk and back to the trail.

“Or,” says Ted Rowe, “we could just hotfoot it right past him.”

I did not expect elk. My goal here, near the Oconaluftee Visitor Center in the southeastern corner of Great Smoky Mountains National Park, is to see how people, businesses, and tourist destinations in the North Carolina mountains cope as we approach six months of life under COVID. I discover a decidedly mixed bag (see companion story). But the bag happens to contain a herd of elk and a nearly 20-year conservation project.

Until Europeans showed up, more than 10 million elk ranged through most of North America. But overhunting east of the Mississippi River killed millions—to the point, around 1900, at which conservationists feared their extinction; the last known elk in North Carolina until recently was shot and killed in the late 18th century. The current elk population is roughly one million, most of them in or near the Rockies. In 2001, the Montana-based Rocky Mountain Elk Foundation contacted the National Park Service with a proposal: Can we reintroduce elk to the Smokies?

The Park Service released a herd of 25 that year and another 27 in 2002. The population now numbers 200 or so, maybe more, and the elk have thrived under a no-hunting order as they spread throughout the park and into the mountains and forests around it. Elk mainly eat grasses, and the Park Service has reserved a 30-acre meadow next to the Oconaluftee Visitor Center where the animals can graze and people can watch—from a mandatory 50-yard distance. That’s why Ted Rowe and his fellow elk-buffer volunteers, called “Luftee Rovers,” lend their services, which matter especially when fall breeding season begins.

“Especially during the rut, these bulls can get pretty aggressive,” Joe Yarkovich, the NPS wildlife biologist who’s monitored and tended the Great Smoky Mountains herd since 2006—he’s known informally as “the Elk Guy”—tells me later. “We’ve had a couple of cars get windows busted out. So you definitely want to keep your distance.” 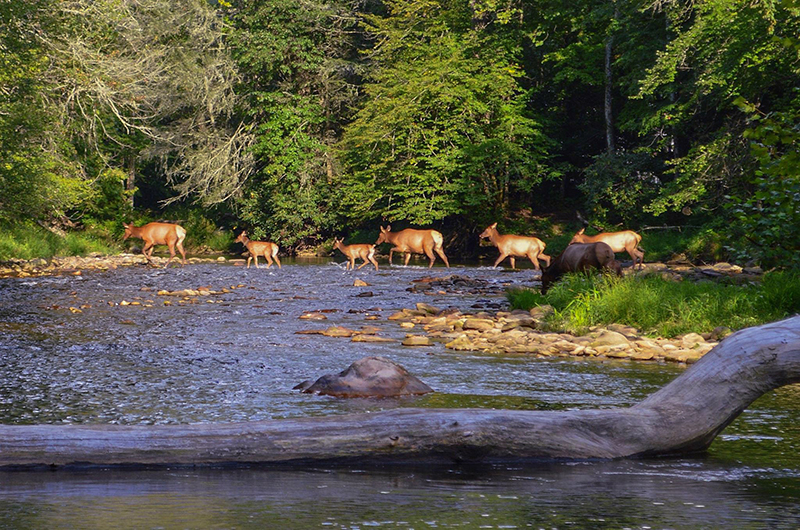 Walkers along the Oconaluftee River Trail can often see elk crossing the river toward the meadow, especially in early morning and just before sundown during fall rutting season—so often and so many that rangers sometimes have to close the trail to protect people. Photo by Bryson City / Swain County NC Chamber of Commerce.

I know none of this as I stroll past the meadow, where a pair of elk pick placidly at the grass a safe distance away. It’s about 5:30 on a Sunday afternoon in late August, around the time when the animals start to congregate before sundown. I figure I’ll walk my dog on a mile-and-a-half-long trail that runs along the Oconaluftee River, a clear, inches-deep mountain stream that babbles over rocks. After a half-mile or so, I see an inviting flat rock at the water’s edge and decide to have a seat and soak in the scenery on a 72-degree day.

About 300 yards upstream and on the opposite bank, something nut-brown catches my eye. It’s a bull elk, crowned with at least a four-point rack and looking as broad as a boxcar. He crosses the river slowly, stopping occasionally for a drink. Then, about halfway between the bull and me, a rustle across the water: an elk cow and calf. They ford the river quickly, not bothering to glance at me or my dog. I grin broadly—until I look directly across the river, perhaps 75 feet away, and take in the sight of three adolescent bulls near the bank. Two spar with each other. The third decides he wants to cross. He appears to aim for a spot very near me, in flagrant violation of the human-elk buffer requirement.

I freeze. The young bull approaches, stepping gingerly. My dog, a pit bull, rarely barks, but she’s a city canine who’s never seen anything like this. She strains at the leash and woofs, which startles the elk. He doesn’t charge, though, thank heavens; he just stops and gives us a WTF look. He reaches the bank roughly 25 feet from us. Then he’s on his way, and so are we.

We’re headed back when a Luftee Rover, facing me on the trail, yells, “Sir!” and begins waving her arms toward me in a “back up” motion. I figure they’re stopping walkers to let an elk, maybe the big bull I saw earlier, cross to the meadow. But I don’t see an elk. A group of about 10 adults and children, in the brush and trees to my right, near the river, tiptoes onto the trail. They’re clearly avoiding something. I still don’t see anything.

He’s on his belly, in a sphinx posture maybe 15 feet from the trail, amid vegetation in waning light on an overcast day and partially concealed by a tulip poplar: a bull. A big bull. Bigger than the one I saw before. Ted knows him. The staff and volunteers at the center have dubbed him “Big Boy.” He’s at least a decade old, and he was once the stud of the herd; many of the elk I see today are probably his progeny. He’s getting old, Ted explains, but he still commands respect—the patriarch in winter. “He’s been lord of the roost here for a long time,” Ted tells me. “A little bit ago, before he laid down, he urinated all over himself. He’s perfuming up to go visit the ladies in the meadow.”

Big Boy is nothing I want to disturb, especially with my pit bull. But some of my fellow walkers—imitating, or reflecting, the indifference so many these days exhibit toward another potentially mortal threat—seem determined to pretend Big Boy is a nonentity or just another installation to enhance their experience. An older gentleman power-walks by us. “Sir. Sir!” yells the woman volunteer. The man doesn’t break stride. A woman in pink tie-dye asks Ted what’s up. He tells her, advising her to wait or, if she has to go, to walk quickly. She creeps past Big Boy. “Ma’am,” Ted calls, “you’re going to have to walk faster.” She does—after she’s pulled out her smartphone and snapped a photo of the massive elk, which remains motionless.

I’m not that obtuse. But it occurs to me that Big Boy might hang out here for a while, and I need to get going. I ask Ted for counsel, and he offers the river-or-hotfoot deal. Hotfoot it is, and he accompanies us. As we stalk past the old bull, Ted discovers why he hasn’t moved. “Ah, he’s just taking a nap,” Ted remarks. “His eyes are closed.” Still walking, I turn to glance at Big Boy, who barely lifts an eyelid and regards us with fully justified irritation. He is, after all, an old man trying to take a nap.

“He’s watching you,” the other Luftee Rover says as we hustle toward the parking lot. This is Big Boy’s turf. I won’t forget it.

The Oconaluftee Visitor Center in Great Smoky Mountains National Park is at 1194 Newfound Gap Rd. (U.S. Highway 441), near the town of Cherokee. For information on the park’s elk, see https://nps.gov/grsm/learn/nature/elk.htm.

Here Are the 2020 Charlotteans of the Year