At its majestic resort, visitors sense the history of its Gilded Age founders around every corner

ONE FEELS SOMEWHAT ANACHRONISTIC pulling into this particular Georgia driveway in a 2016 Honda Odyssey. The 133-year-old Jekyll Island Club Resort, with its signature Victorian turret, stands in majesty among southern live oaks entwined in Spanish moss. It was once lodging for the Jekyll Island Club, a hunting and recreational group whose members at one point controlled one-sixth of the world’s wealth. Its ledger carried names like Rockefeller, Vanderbilt, and Pulitzer. This is where club member J.P. Morgan arranged a secret meeting to formulate the Federal Reserve—a private session in 1910 that participants wouldn’t acknowledge for another two decades. As I climb the hotel’s grand, creaking staircase with my family’s duffel bags, I wonder what the club’s billionaire founders would think of the modest inhabitants of room 406.

Class, though, is in the eye of the stakeholder. Morgan, the banker and co-founder of U.S. Steel and General Electric, died in 1913 with a net worth of $80 million, or $1.2 billion today. Fellow island visitor John D. Rockefeller remarked, “And to think, he wasn’t even a rich man.” He wasn’t being sarcastic; these people really talked like that. The Jekyll Island Club’s 60-year history is full of these tidbits, backroom deals and bitter rivalries among yesterday’s titans of industry. If you’re entranced by such details, it becomes a micro-obsession during your stay. During daytime activities, you make notes on which Wikipedia rabbit holes you’ll burrow into at night.

The resort’s centralized lobby bar is our first stop. Though it looks period-specific, it’s actually left over from the 2000 film The Legend of Bagger Vance. The golf movie, set in the ’30s, used parts of the property as its backdrop, and production created this bar for a few scenes. The resort owners liked the design so much, they kept it. I mention the convenience of having the bar close to the elevator, and the masked mixologist drops a factoid: In the early days of the club, wealthy visitors would bring down strapping lads from the north to run the site’s hand-operated elevator. They’d get free lodging in exchange for pulling Vanderbilts to and from their rooms throughout the day.

On the morning after our arrival, my family embarks on a guided nature walk. Even here, we sense the presence of the now-defunct Jekyll Island Club. Ray Emerson, lead park ranger for the Jekyll Island Authority, describes how the club changed the ecology of the Golden Isles’ southernmost island: When the sportsmen ran out of pheasants or deer, they simply imported more. They also stocked and restocked non-indigenous game, which further upset the balance of these wilds. 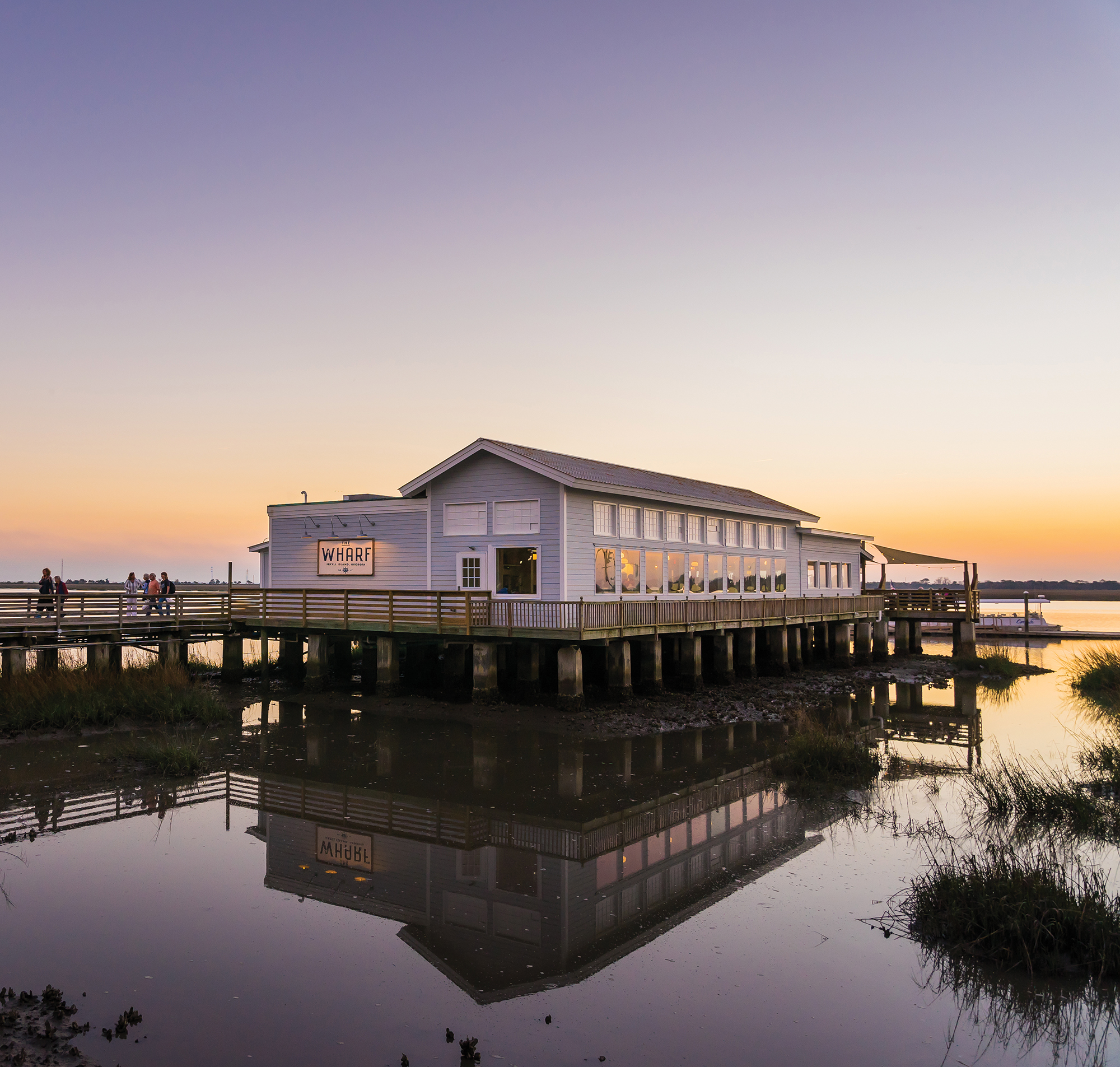 Above: The Wharf is the island’s only restaurant on the water. Below: The Italian Renaissance-style Crane Cottage has a sunken garden often used for weddings. Courtesy of Jekyll Island Authority.

Georgia purchased Jekyll Island for use as a state park in 1947, after the Great Depression and World War II ravaged club membership. Since then, animal inhabitants—from white-tailed deer to marsh hares—have led safer and longer lives.

During our walk, a passerby tells Emerson that a tourist is “provoking a gator” a few yards down the path.

“OK,” he replies. “Would hate for him to become lunch.”

It turns out that the ranger knows the 6-foot American alligator and her mate, who frequents one of the island’s four golf courses. (Three of those are championship, 18-hole courses.) The JIA tracks several Alligator mississippiensis specimens. (JIA literature assures us that visitors who respect the island’s wildlife and remain a “generous distance” from gators will be safe.) When we pass the gator, she’s soaking up rays in the water just steps from the path. It appears the provoker has moved on.

For the rest of our stay, we find that it checks the boxes of a coastal vacation, as we peruse the 10 miles of gorgeous shoreline and a trove of trinket shops. Its most Instagrammable area (and that’s saying something) is Driftwood Beach, where seawater has killed the trees of a former maritime forest as, over centuries, the island’s northern end eroded. The Atlantic has left an otherworldly landscape of dead trunks and gnarled clusters of branches.

The quality (and range) of the dining measures up to the scenery: The resort’s AAA Four Diamond restaurant, Grand Dining Room, serves elegant seafood and Southern dishes, while off-property spots (see sidebar) have casual options for visitors on the go. If you are interested enough, each ticked box unlocks new insight on the island’s former owners. Documentaries and biopics are one thing. When’s the last time you had the opportunity to inhabit history? 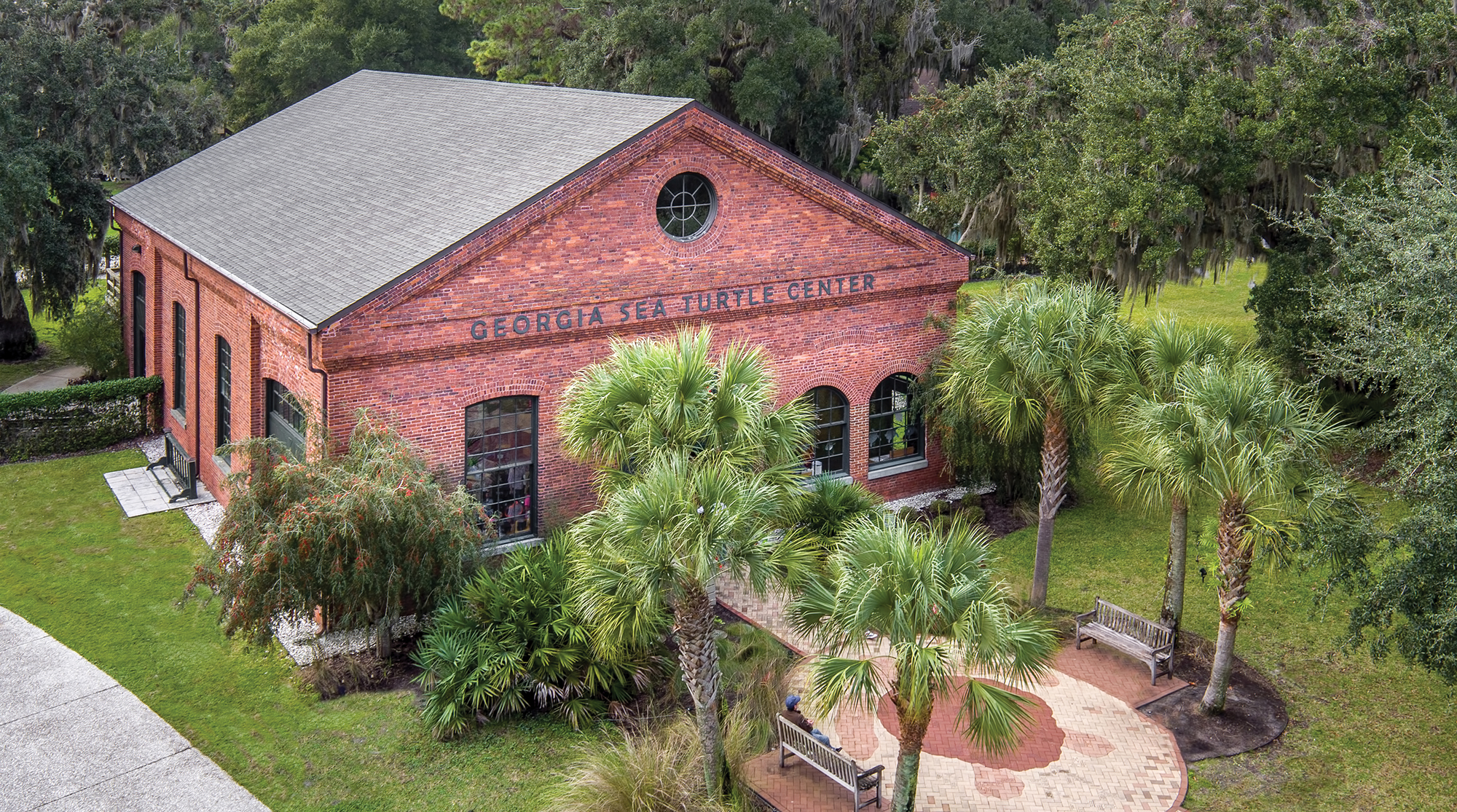 Several original structures—some of which you can stay in, each with its own fascinating story—surround Jekyll Island Club Resort. Island Club Cottages offer more room and privacy, among other features: Sans Souci was one of the nation’s first condominiums, and the Italian Renaissance-style Crane Cottage has a sunken garden often used for weddings. Though you can’t stay there, the Hollybourne Cottage is worth touring: Founding club member Charles Stewart Maurice, one of the great American bridge designers, built the house like a bridge—it’s supported by a system of trusses with wings that float on piers in the basement.

The resort’s Grand Dining Room and pier restaurant The Wharf are both upscale options. But if you want to explore, I submit this concept for lunch: beach pizza. Red Bug Motors Pizza, which has both traditional and thin-crust, serves a specialty pie popular with locals: the Red Bug Special, with pepperoni, Italian sausage, mushrooms, red onions, and black olives. The beach (and Jekyll Island Miniature Golf) is a short walk away, so bring a blanket when it’s ’za time. For dinner, head to Tortuga Jack’s Restaurant, a Baja-Mexican joint with live music and sizable burritos. Some visitors can’t resist a margarita inside a hand-hollowed souvenir coconut with a painted pirate face. (The author is “some visitors.” That thing now sits in his office.) 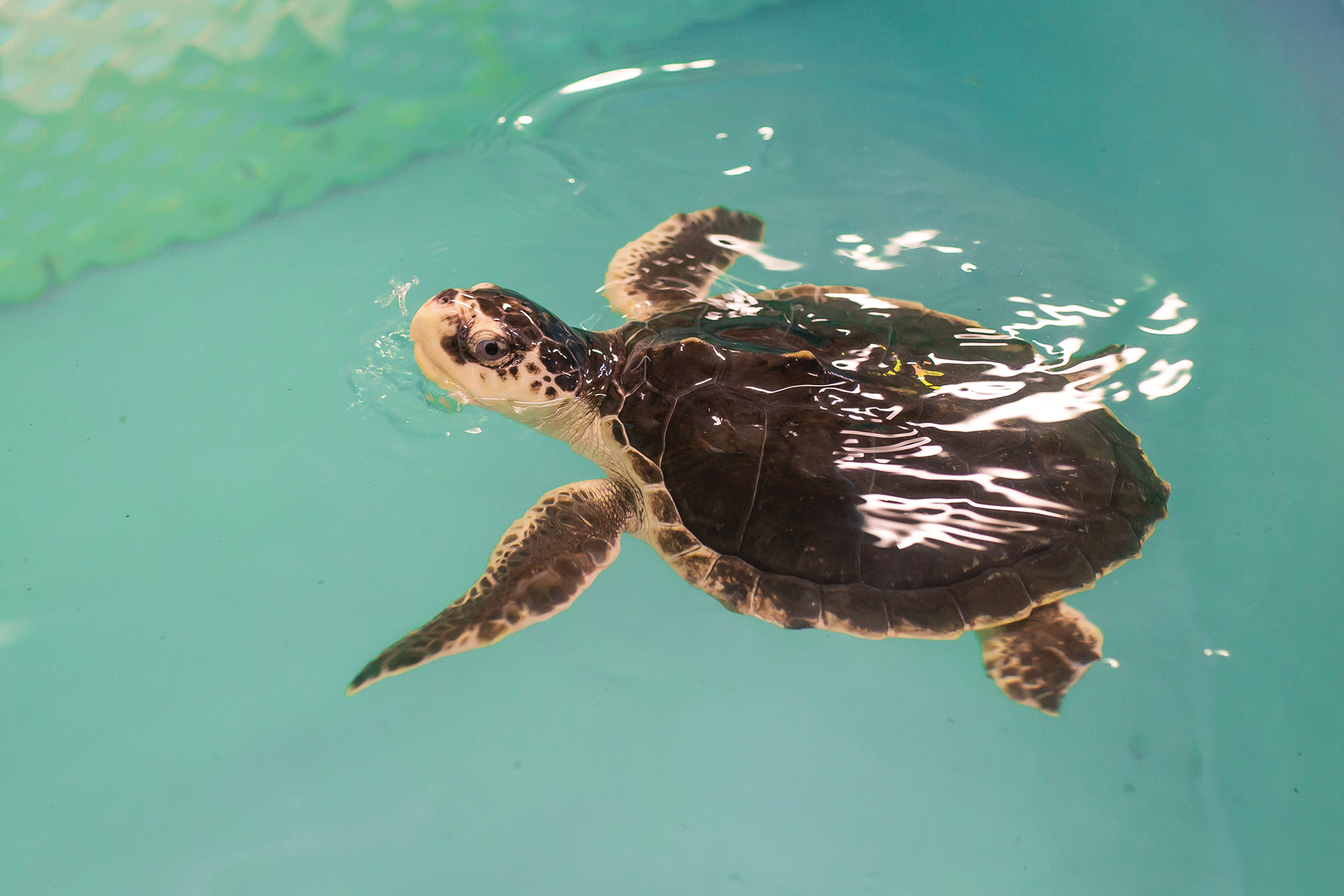 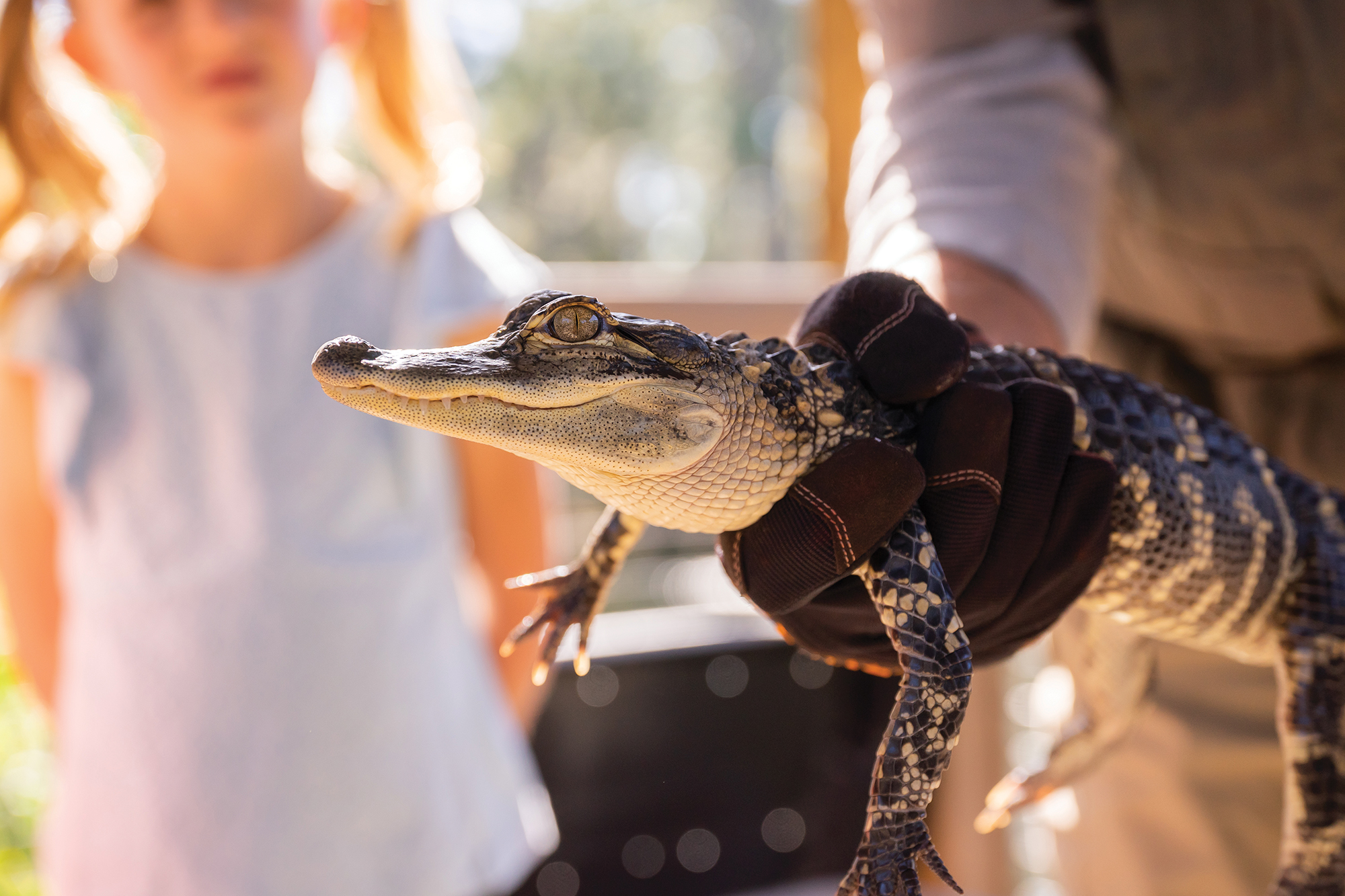 Jekyll Island’sGeorgia Sea Turtle Center is just 300 yards from the resort. The center protects, rehabilitates, and educates the public on these vulnerable species, found along the Atlantic coast from here to New England. (A guide tells us the Sea Turtle Center occupies what once was the power plant for the Jekyll Island Club.) Club members constructed the Faith Chapel in 1904, and it contains one of only a few stained-glass windows in the world constructed and signed by Louis Comfort Tiffany. For history buffs, a broader suggestion: Take every tour you can. The island has several, and each offers a fascinating new detail about its complicated history.