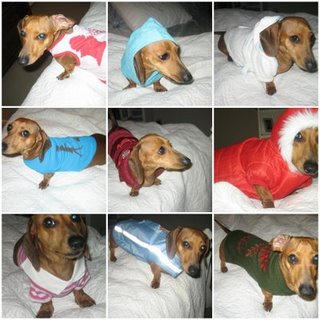 Ok, I understand that dogs probably prefer not to wear clothes. I once had a dog who would immediately run and hide under the closest piece of furniture the second I squeezed my “Wake Forest Demon Deacon” sweater over her head. (I chose to think of this as her rebellion against the sweater rather than distaste for the school.)

But, no matter how many times I’ve scoffed at other dog owners’ ridiculous pet clothes (Yeah, I’m talking about you, guy from the park who owns the terrier with the t-shirt that reads “Bitches Love Me” oh, and you too Paris Hilton), I can’t seem to stop buying clothes for my own miniature dachshund (seen being tortured above). She’s got the obligatory Halloween costumes (think: pumpkin, angel, and bride). And then of course, I feel the need to purchase souvenirs for her when I travel (because all dogs need T-shirts that say “Seaside Beach” right?). I’m starting to think that she has better clothes than I do—to the point that one could say that stores carrying what I like to think of as canine couture, like Meow & Fetch in NoDa, are included among my favorites in Charlotte. I’d say at this point I’m about one shopping spree away from purchasing us matching jumpers. -S

My Verdict: So, I know I’m totally insane a little crazy, but if celebrities can do it and the dog looks good, then I say there’s no shame in your pooch strutting their stuff.

Will it work in Charlotte? Um, obviously. Have you seen the canine couture runway that is Freedom Park?

Want to appeal our verdict? Make your claim in the comments below.

Categories: Trend on Trial
Contest of the Month