Marrying old with new, a remodeled ranch is the centerpiece of a family’s beginning

When Jim and Vicki Medall were searching for a home for their newly blended family, a moderate one-story brick house in south Charlotte captured their imagination. Situated on a spacious lot in a private location, the French-eclectic ranch had its challenges. It was nearly thirty years old, had eight-foot ceilings, and was a modest 2,750 square feet. But it was handsomely situated on more than an acre of land with plenty of potential. 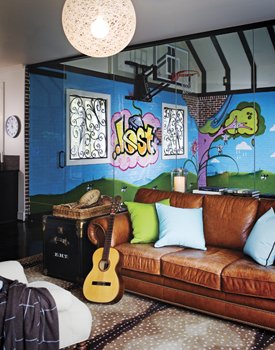 So much potential, in fact, that when the Medalls began explaining their ideas to architect Harry Schrader, he found himself scrambling to keep up.

Schrader, whose client list includes Carolina Panthers President Mark Richardson, racing legend Jeff Gordon, and NASCAR Chairman and CEO Brian France, knows what it’s like to design and manage a big project. But with the Medalls he encountered a daring blend of guts and imagination. They entered the design process as participants, not bystanders, and were willing to trust their instincts. Together with Schrader they reconfigured, expanded, and renovated the house, doubling its square footage and imbuing it with a distinctively American vision.

“Jim doesn’t sit back and say, ‘What do you think we ought to do?’ He says, ‘This is what I want to do, can you do it?’ ” Schrader says. Jim, the high-energy president of Rhein Medall Communities (The Palisades near Lake Wylie is one of the company’s projects), had seen plenty of real estate projects and was ready to try something unique. With his sense of adventure and Vicki’s design strengths, the project began with a momentum that kept growing.

The front of the original three-bedroom house was preserved—their three teenage sons (Jim has two and Vicki has one) took the bedrooms—and the living room was transformed into a low-ceiling dining room. “Frank Lloyd Wright used to design dining rooms with low ceilings because the room was meant to be experienced from a sitting position,” Schrader says. Casement windows were installed and walls were lined with dark bookcases. “We wanted it to feel like a library,” says Jim.

But that’s where the past ended. The foyer was blown high, into a light-saturated hall that opened to a great room at the back of the house. Big windows provided a spacious view. The boys’ side of the house grew into a wing that included a basketball court, a bathroom modeled on a locker room, a laundry, and a den with adjoining kitchen features. On the opposite side, past the great room and dining room, a new kitchen and sitting room were added, and above them a master suite. Outside, behind this wing, a separate two-story guesthouse was built that included a wine cellar and outdoor living room with fireplace.

The result is breezy, clean, and fresh, with an emphasis on comfort. In the great room, there’s a wide-open feel that pays tribute to the American West.

“I grew up in California,” Jim says, looking around the room. “It’s a throwback from having lived out there and loving that comfortable, easy lifestyle.” Vicki lived in Colorado during the years she studied bookbinding from a master German craftsman, and their combined love of the West is reflected in the décor she designed. Weathered beams span the ceiling, a stone fireplace soars fourteen feet, ottomans are covered in animal hides, and the chandelier is an old barrel transformed into a light fixture. But it’s the American West with European roots—handsome antiques mix with modern seating, including a monumental French clock face that hangs over an elegant sofa covered in chocolate suede. Vicki bought the rusted clock with giant Roman numerals in 1999, the year she co-chaired the Mint Museum’s antiques show with Anne Ratcliffe. Another European influence is Vicki’s collection of roe deer antlers—a nod to her German ancestry.

The most spectacular room in the house is the master bedroom, which combines over-the-top luxury with restraint, mixing hard surfaces with plush ones, curves with angles. Behind the bed is a leather-lined wall; the ceiling is covered in French mirror tiles with an antique finish. A curving wall of windows overlooks the pool, yard, and boys’ wing while a mirrored door—hung on runners modeled after those used for barn doors—slides open to reveal a spa-like bath.

A skilled bookbinder, Vicki had the patience to develop continuity in the interior design, which reads smoothly from cover to cover. A neutral palette of black and white dominates, softened by browns, all anchored by oak flooring stained and painted a deep black, which begin in the foyer. There is also an emphasis on art—the open kitchen has no upper cabinets, only art—and a number of works by friends are displayed throughout the interior, including a painting by Andreas Bechtler, whose private collection of modern art will soon anchor the Bechtler Art Museum in downtown Charlotte. The graffiti-style murals on the walls of the gym were painted by German artist Stefan Strumbel, another friend.

Outside, a smooth lawn surrounds an elegant pool—a clever conceit to satisfy Jim’s edgy search for going green. It’s synthetic SYNlawn—no watering or mowing required. “The kids love it,” he says, smiling. “They’ll go out in the middle of a rainstorm and they won’t damage it.”

“This house spreads its wings from a tired ranch to a home that embraces a really nice piece of property, and creates the estate setting,” says Schrader. “We took what limitations the house offered and tried to make them into positives.” With art, wit, and stylish comfort, the Medalls have created a home with wings—one for the kids and one for themselves. At the center of this design is a place to build a new family life: open spaces, a welcoming fireplace, bar stools and a kitchen counter, and room to roam.