Uptown Vs. Downtown in Charlotte: It’s More Complicated Than You Think

Archives illuminate how long we’ve argued over the perennial question

Newcomers find it odd that Charlotteans refer to their city center as “uptown.” Other cities have uptowns, but usually as a counterpoint to a separate area called “downtown.” How and why did Charlotte decide on just “uptown”? Was it some marketing campaign from the 1950s, when suburban plazas like Park Road Shopping Center started eating downtown’s lunch? Or is it older?

The name does reflect a geographical truth. Tryon Street runs along a ridgeline—a route that began as part of the Great Trading Path of Catawba Indian times. To reach the intersection of Tryon and Trade streets from any direction, you have to walk uphill. Uptown really is up.

Battles over the uptown/downtown label pop up often on Facebook pages like “Charlotte N.C. The Past and Present.” Even native Charlotteans disagree, often heatedly. Some say: We always called it uptown, far back as I remember! Others insist: No one called it uptown—until new arrivals misnamed it!

What’s the real history? Recently, I discovered that the Charlotte Mecklenburg Library’s history center, the Robinson-Spangler Carolina Room, offers a marvelous online resource called NewsBank (charlottehistorytoolkit.com/newspapers). A recent upgrade allows you to word-search The Charlotte Observer’s archive back to 1883 from the comfort of your home computer.

For a historian, that’s like candy. I immediately typed in “uptown” to see when the word first appeared. Aha! Oct. 16, 1888, “A Street Car Runaway.” An out-of-control, horse-drawn streetcar without passengers crashed into another and forced its riders to jump off. “Mr. Geo. F. Bason and Mr. Rogers were aboard the uptown car and they got out lively.” It appeared frequently thereafter. 1889: “A Daring Burglary” occurred while Mrs. S.C. Bryan “was uptown buying some garments.” 1897: The Southern Railway opened “an uptown ticket office on Tryon Street.”

That proves that “uptown” is no recent invention. It came into use just before 1900, when people needed a word to refer to Charlotte’s newly dense cluster of business buildings around Trade and Tryon. 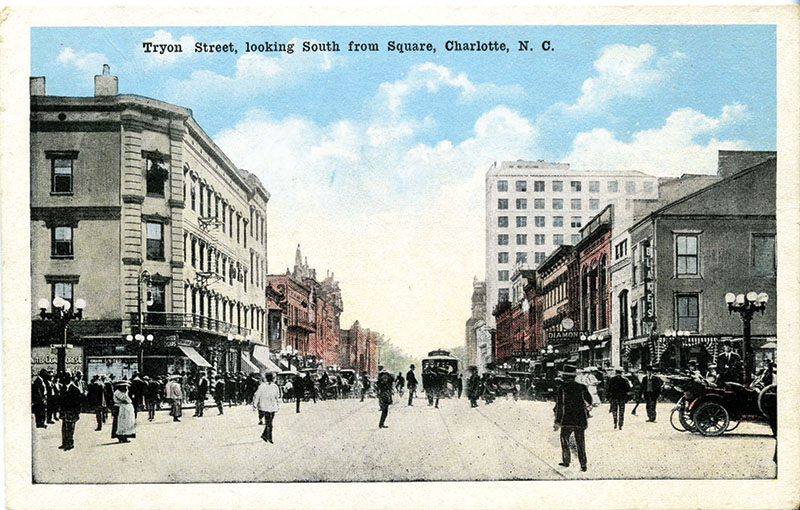 But what about “downtown”? It first showed up on June 9, 1906, nearly 20 years after the runaway streetcar article: a report of a passing blimp, rare at the dawn of manned flight. “The gentleman who made the discovery has a room downtown.” So “uptown” has deeper roots.

The peaceful coexistence ended in 1959. Merchants, led by department store magnates George Ivey and John Belk, founded an Uptown Charlotte Association to battle suburban competition. But even then, Charlotte had lots of newcomers, and where they’d come from, “downtown” connoted “business district.” The organization pivoted: “Publicity lends itself to downtown,” explained M.W. Crosland of the rechristened Downtown Charlotte Association.

Some old-line Charlotteans wouldn’t let the matter rest, though. Jack Wood, owner of a South Tryon Street clothing shop, mounted an “uptown” campaign in the early 1970s and won sanction from the city government. On Sept. 23, 1974, as recorded in City Council minutes, Mayor John Belk presented Wood and his allies “with a proclamation designating [the] central shopping center and business area as ‘UPTOWN CHARLOTTE.’”

So, is the debate settled? “Uptown” has longer tenure and the city’s official approval—but there’s historical precedent to call it “downtown” if you wish. Either way, visit, and bring some money to spend.