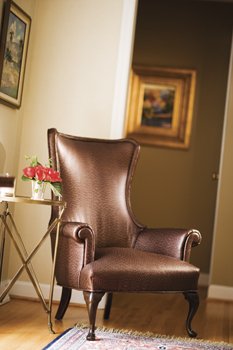 When Randy Wells met Brandon Seacord, it was a classic case of boy meets girl. Boy and girl fall in love. Boy and girl marry in April 2005. Boy and girl buy house and move in together. Then came the true test: to find a way to combine their respective furniture collections and belongings into one, cohesive, stylish home.

Brandon, a Charlotte native, was awaiting the completion of a condo in uptown when she married Randy, who was dwelling in a loft in Fourth Ward. "I think Randy had a lot more furniture than I did," laughs Brandon.

Rightly so. Randy, a former manager for Century Furniture’s upholstery and outdoor division, is now the president of Charlotte-based Valtekz, a composite material textile company that specializes in luxury faux leather materials. The product mimics the texture and lustrous feel of exotic skins such as crocodile, ostrich, and traditional hides, making Valtekz a favorite among furniture and interior designers worldwide. In fact, the faux leather is so popular that Manhattan "it" designer Celerie Kemble created her own line for Valtekz.

Turns out Brandon—impeccably pulled together and immensely personable—was a perfect match for Randy’s laid-back style. They wanted their first Charlotte home to be a place where they could unite another perfect pair—cozy, vintage charm and clean, modern chic. It’s a duo of design sensibilities that complemented each other…just like Randy and Brandon.

When their house hunting began, they had relatively few criteria. "Being from Charlotte originally, I wanted to stay near the center of the city," says Brandon. "We also knew we wanted to look at older homes, something with a bit more character." They looked first in Dilworth and the South End area (where Valtekz is headquartered) before expanding their search farther into south Charlotte, where they discovered the neighborhood of Robinson Woods. "I immediately loved the big wooded lots," says Brandon. "It’s ideally located, with proximity to uptown and the SouthPark area."

They found an unassuming three-bedroom, 2,000-square-foot 1964 brick ranch still under the care of its original owner. The lack of potential buyers might have had something to do with the bright blue carpeting and cramped, narrow floor plan of the main living areas. While others might have only seen the challenges and flaws, Brandon and Randy saw potential. "The house was actually in impeccable shape," says Brandon. "There wasn’t so much as a single chip in a bathroom tile." They were also pleased to discover that the original owner, a former legal secretary, had kept copious notes and records on the house, including its original architectural blueprints. They were sold.

The Wellses closed on their new home in October 2006 and immediately enlisted Kelly McArdle Construction to renovate and restore some of the ranch’s original elements. "We were living on mattresses for months," says Brandon of the three-month renovation. When the dust settled, Randy and Brandon had managed to retain almost all of the home’s vintage, architectural charm: heart pine wood paneling, which ran throughout the kitchen and den; a wall of built-in book shelves; the gorgeous white oak floors that were hiding underneath the off-putting blue carpet; and the well-crafted kitchen cabinets. "I was so glad that we were able to keep the original cabinets," says Brandon. "They just don’t build things like that anymore, with dovetail joints and such strong construction."

Those time-tested cabinets were repainted in an aged-espresso tone. To offset the dark hue of the cabinets, Brandon selected a classic, light gray honed Carrara marble for the counters and installed a mirrored backsplash. Recessed lighting and stainless steel appliances complete the updated kitchen. It became the first room in the home to achieve the "vintage meets modern" tone, which the couple then echoed throughout the rest of the house.

The creative coupling of those two design schemes is evident in even the smallest details. A 100-year-old Louis Vuitton suitcase sits unassumingly in a corner of the kitchen’s adjoining sitting room, juxtaposed with a sleek, modern chair designed by Randy and inspired by the driver’s seat of a circa-1980 Ferrari. The clean lines of a neutral-toned sofa covered in Valtekz tumbled steer in Key Largo limestone sits parallel to a vintage English trunk. Blown glass orbs that once bobbed in the open Atlantic Ocean waters while attached to fishing nets extend the vintage feel.

A laid-back, beach-inspired palate of colors bonds together the old and the new, with sandy neutrals and rich browns playing off cool blues that range from stormy steel to deep, nautical navy. The kitchen, living room, and master bedroom ceilings are tinted in the palest shade of icy blue-gray, while sea grass rugs line the hallways and family room floors. Brandon and Randy tempered the modern feel with oversized, plush Oscar de la Renta pillows, ornately framed mirrors, Oriental rugs, and other traditional décor elements. They also utilized Valtekz coverings to add contemporary interest and depth to unexpected places: The walls of the long, narrow front living room are covered in Valtekz monitor in Key Largo limestone (a lizard-like print). "It’s an unusual space, that front room," says Brandon. "The concept of a formal parlor isn’t something you see in newer homes, so it’s hard to get used to. We haven’t quite figured out how to get people to sit out there and not just hang out in the kitchen, but the walls look great!"

Down the hallway, the master bedroom evokes an opulent feel, with a vast, tufted headboard swathed with Valtekz tumbled steer in raw umber, clean, crisp linens, and an oversized mirror propped against one wall. Leftover marble from the kitchen was used to upgrade the master bath, which still retains its original pink tile. "It was in too good of shape to just get rid of," says Brandon, who was clever enough to tone down the outdated hue by coating the cabinetry in the same dark espresso that was used in the kitchen, instantly redefining the tiles as purposeful, vintage kitsch rather than dated leftovers.

The couple is quick to mention that their work is far from finished. "The yard is next," says Brandon, her mind already churning with new ideas. They won’t be lacking of posh patio furniture, since Valtekz has an entire line designed to withstand the ravages of the elements. But overall, they’re pleased with the fruits of their first labor as a married couple. "It was a lot of work. Much more than I expected it would be," says Brandon. "But when I look at these rooms now, I see the little things, like the framed corks from champagne bottles that were opened the weekend we got engaged, a bottle full of sand from the beach where we went on our honeymoon, and a painting that once hung in the restaurant where we had our first date."

More than just a showcase for the latest in Valtekz’s designer creations, the Wellses have created a warm, inviting home that truly represents the marriage of two stylish personalities and two classic design aesthetics.

"We really couldn’t have asked for more in our first home," says Brandon.

"You mean our last home," says Randy. "After all the work we did, I plan on being buried in the backyard."